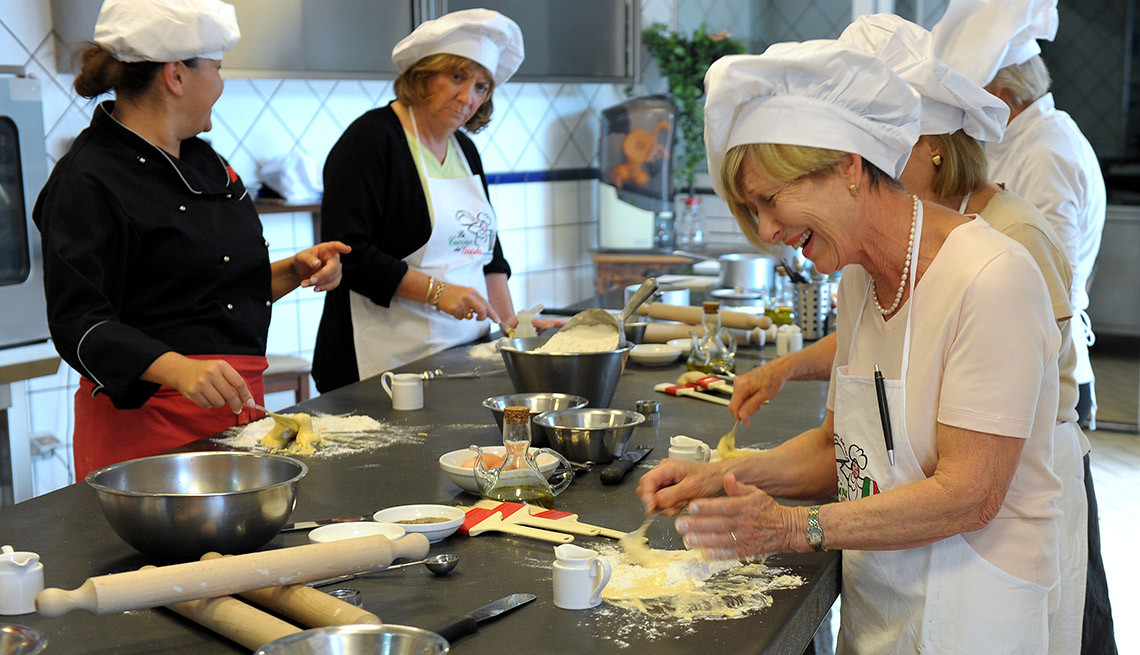 The International Kitchen is one of many gourmet cooking tours and culinary vacations in Latin America, Europe and America.

En español | Some say the way to most deeply understand a place is through its cuisine (just ask Anthony Bourdain). That's the idea behind culinary travel, where visitors learn to cook like the locals as a way to absorb a foreign culture.

"Today's travelers are experiential," says Erik Wolf, executive director of the World Food Travel Association, a nonprofit educational organization whose community of food-focused travel professionals numbers 48,000, according to Wolf — up from 18,000 in 2013. "People want to get out of the bus or the car and actively participate and learn and do."

Epitourean, a Colorado-based tour company, offers more than 120 different food-focused travel packages — called Edible Destinations — a year. It sent more than 5,000 foodies to Italy in 2016, and this year is on track to send a few thousand more. Other popular destinations include California's Napa Valley; Charleston, S.C.; and Savannah, Ga., where Low Country cuisine is the draw. David Loy, the company's president, says that at least three-quarters of Epitourean's customers are older than 50, and many of them splurge on a culinary vacation as a special way to celebrate a milestone birthday or anniversary.

The cost of these trips can vary widely. Many U.S. bed-and-breakfasts offer two- or three-day culinary getaways for less than $1,000. The Blair House Inn in Wimberley, Texas, has a variety of three-day cooking classes, including “BBQ Camp." For about $390 per person (not including a room for two nights at the inn, which will cost around $160 to $305 a night plus tax), you can learn to cook Hill Country goodies such as Texas brisket or baby back ribs with Cherry Coke glaze.

On the other hand, spending a week in a gorgeous riverside French chateau in the Loire Valley while learning how to make chocolate soufflé or tasting fine wine and artisanal cheese is not going to be cheap. Plan for around $3,000, not including your flight, for that sort of high-end experience.

You can find deals, however: While Epitourean's listed price for, say, a culinary excursion in the Tuscany region of Italy sells for $3,898 per person, double occupancy, the company also has offered subscriber promotions for as low as $1,799 for the exact same package. Sometimes their partners want to increase occupancy for a certain time of year, or they want to draw new customers. So consider waiting for the right trip to go on sale.

Decide what kind of experience you want, then read the fine print to make sure you're getting it. Do you hope to get garlic under your fingernails, or are you happy just observing a chef whip up a great meal for your dining pleasure? You don’t want to show up and find that the classes are really demonstrations and not hands-on as you’d expected.

And look online for reviews — not just of the tour operator, but also of the venue where you'll be staying and cooking.

Here are three trips to consider.

Los Dos Cooking School, Merida, Mexico
Try a three-day, four-night Yucatán cooking workshop. Small groups are led by Chef Mario Canul, who teaches at a colonial mansion in downtown Merida. (Note that the founding chef, David Sterling, recently died.) Canul will immerse you in the peninsula's culinary culture, with trips to the market and lessons in preparing indigenous treats such as salbute (crispy tortilla topped with ingredients such as smoked pork), carne asada and horchata (chilled almond-and-rice drink). The price: $1,925 per person, double occupancy, with a minimum of two, excluding airfare.

John C. Campbell Folk School, Brasstown, N.C.
You can take a weeklong cheese-making class at the John C. Campbell Folk School in Appalachian North Carolina and learn to make Mexican queso blanco, Italian mascarpone, mozzarella and other creamy concoctions. That's $630 plus $548 for six nights' accommodations, double occupancy, with a shared bath (or just $120 if you want to bring a tent and camp), including family-style meals. Also at the folk school: A weekend class — sushi making, for example — costs about $554 per person, double occupancy, including meals.

International Kitchen, Amalfi Coast, Italy
Enjoy Italy's Amalfi Coast on one of International Kitchen's best-selling trip packages, the Mediterranean Cooking Experience. It involves six nights in a boutique hotel with a swimming pool on a hillside facing the sea, where travelers learn to cook classic regional dishes such as Sorrento-style gnocchi, stuffed calamari and Neapolitan pizza from an Italian chef — often while listening to opera and sipping Prosecco. That's along with excursions to places such as Pompeii, the island of Capri and a farm where the family has been making mozzarella by hand for more than 60 years. The price: $3,450 per person, double occupancy , from May to September, excluding airfare; $2,925 during low season.

Christina Ianzito is a senior writer-editor for AARP Media.