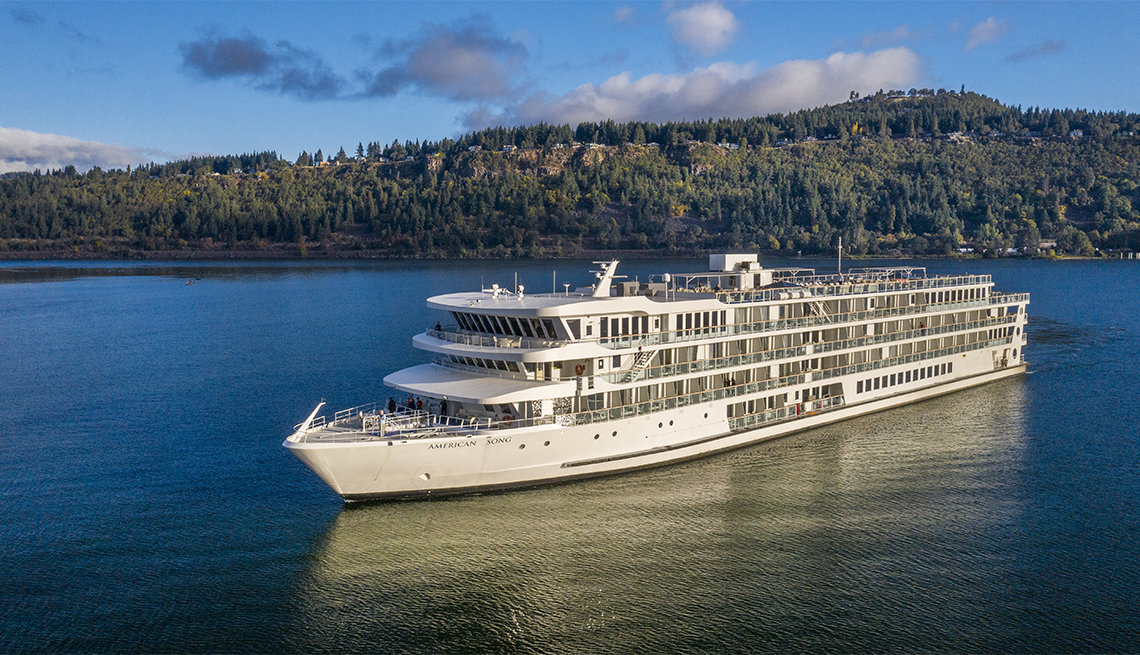 En español | As our ship drops down in the Ice Harbor Lock and Dam on Washington’s Snake River, 50 or so cruise passengers watch raptly from the deck, some recording the scene on their smartphones. It’s the first of many locks the boat will transit on this 11-day cruise down the Columbia and Snake rivers from Richland, Washington, to Portland, Oregon.

Others of us observe through the large windows of the ship’s lounge, sipping hot coffee as we listen to Todd Weber, 64, the historian and guest speaker on board, point out the fish ladders built into the lock. Salmon on this river migrate as many as 1,000 miles and ascend more than 1,000 feet through rapids and falls to reach their spawning grounds. “The fish ladders,” Weber explains, “like small steps, allow them to swim upriver.”

I’ve joined 165 other passengers aboard American Cruise Lines’ American Song to get a taste of river cruising, an increasingly popular vacation choice in the U.S., especially among older travelers. My particular trip takes us toward the Pacific on the waterway once traveled, with considerably more hardship, by the intrepid explorers Meriwether Lewis and William Clark on their quest to establish a route to the West. That 1804–06 expedition provides the theme of our cruise.

The lock experience is educational, memorable and utterly relaxing — words that describe the best parts of our journey and, for that matter, many American river cruises.
Two major U.S. river-cruise providers — American Cruise Lines (ACL) and American Queen Steamboat Co. (AQSC) — have been gearing up to meet a growing demand for these trips, many of them focused on American history. Popular routes include the Columbia and Snake rivers, in the Northwest; the Mississippi (and, to a much lesser extent, the Ohio), in the Midwest; the Intracoastal Waterway, in Florida; the Hudson and St. Lawrence rivers, in the Northeast; and Alaska’s wildly popular Inside Passage (not technically a river, but in experience it’s nearly indistinguishable from one).

Multiday river cruising for tourism was a relatively sleepy business in the U.S. until about a decade ago; since then, the current has been strong. Helping to jump-start the activity was the relaunch, in 2012, of the fully refurbished American Queen, a classic steam-powered paddle wheeler built in 1995. With a capacity of 417, it now features a two-deck-tall performance space modeled to resemble a 19th-century opera house, and a dining room that holds 215 guests. The vessel is one of the AQSC’s two paddle wheelers along the Mississippi; a third, American Countess, will hit the water in April. The cruise line has also added a riverboat on the Columbia and Snake rivers, American Empress (which sold out 26 consecutive cruises in 2019).

By the end of the year, ACL will have 13 ships on U.S. waterways — up from eight in 2017. Two of them, American Song and American Harmony, are modern riverboats (which look like small oceangoing ships) that were added in the past year and a half. Three more ships are on the way. In total, ACL has more than 350 river and coastal cruises scheduled for 2020. PR manager Alexa Paolella says the company is preparing for the surge in demand from “the huge number of boomers coming into retirement age.”

Indeed, most passengers I meet on my October cruise are 70 or older. On American river cruises, more than on European ones, “it's hard to find people under 60,” notes Chris Gray Faust, managing editor of cruise-review site Cruise Critic. These cruises, she adds, draw “people who can no longer or don't want to travel overseas.” For one thing, the ships are easy to navigate even if you use a wheelchair or have other mobility issues (the five-level American Song has two elevators).

They also entice vacationers who aren't interested in mega cruise ships on the ocean. The river journeys feel much less crowded; many U.S. riverboats accommodate only 200 or fewer passengers. And, like all cruise ships, river vessels are essentially mobile hotels, which makes for a very easy getaway. “You unpack and you're there,” says Jane Hollar, 72, a waitress from Indianapolis who's on my Columbia River cruise, her fourth U.S. trip with ACL. “That's it until you go home.”

Plus, of course, the main reason river cruises attract older customers is that such travelers tend to possess two key things they might not have had at an earlier stage of life: money and time.

It can be pricey to cruise American rivers, especially compared with many ocean options ($299 for a seven-day Caribbean cruise, anyone?). ACL's Columbia route starts at $7,005 for 11 days, though most of the company's Columbia and Snake river cruises are eight days, starting at $5,220 on the American Song — a sleek boat launched in 2018 — or at $3,725 on the paddle wheeler Queen of the West. On top of this sizable cost, you pay your own airfare, unless you choose a river trip within driving distance of your home.

On my cruise, Sandy Skwirut Hart, 71, from Frankfort, Illinois, tells me that she's on her third river journey and that she and her husband of one year, Jim Hart, 76, see them as deserved splurges. “We call these SKI trips — ‘spend the kids’ inheritance,’ “ she jokes.

But some trips are nearly all inclusive. On the American Song the standard fare includes all meals, drinks, tips, a hotel stay the night before the cruise, transport to airports, and most excursions at ports on either the north (Washington) or south (Oregon) shore. The outings are described in a daily “Ship to Shore” itinerary slipped under your door: bus trips to Multnomah Falls, wineries, Mount St. Helens, Fort Clatsop (where Lewis and Clark camped in 1805–06) and downtown Portland. A train ride to the stunning snowcapped Mount Hood, billed as a “signature tour,” is $55, one of the few add-on charges.

What's more, there's plenty of free onboard imbibing — delicious Northwest wines at lunch and dinner, a predinner cocktail hour, an evening bar service, and on a day when the boat was between ports, a noon margarita party and 3 p.m. happy hour. The food is plentiful. You have a choice for your hot breakfast (omelets, pancakes, waffles) and three options each for appetizers and entrées during lunch (club sandwich, roasted vegetable pasta, grilled cheese) and dinner (braised short ribs of beef, cioppino, zucchini Parmesan).

“You get to visit with the same people over and over, instead of losing yourself in a crowd of 2,000 people. We like that part the best.”

The young crew members literally go overboard to meet guests’ special requests; one passenger tells me that on her recent ACL cruise in Alaska they picked up a specially flavored coffee creamer for one guest and another's favorite chardonnay.

Many age-50-plus travelers prefer that kind of simple all-inclusive service over, say, access to a zip line or a laser-tag arena. “They're looking for sophisticated travel experiences and are not as attracted to giant ships with go-carts and casinos,” Paolella says. “It's about comfort and great food and being taken care of.”

In fact, some might find the experience a little too low energy at times. That said, you can find more active river-cruise itineraries, such as excursions along the Columbia that offer kayaking, biking, fishing or zip-lining.

You're pretty much guaranteed to make friends on small ships like these. All ACL itineraries, including those on the American Song, have open seating for every meal, so you can plop yourself down next to whichever person or group looks fun or interesting. And if you make a connection, it's easy to find your new pals in the dining room and hang out with them for the rest of the trip. “You get to visit with the same people over and over, instead of losing yourself in a crowd of 2,000 people,” Skwirut Hart points out. “We like that part the best.” 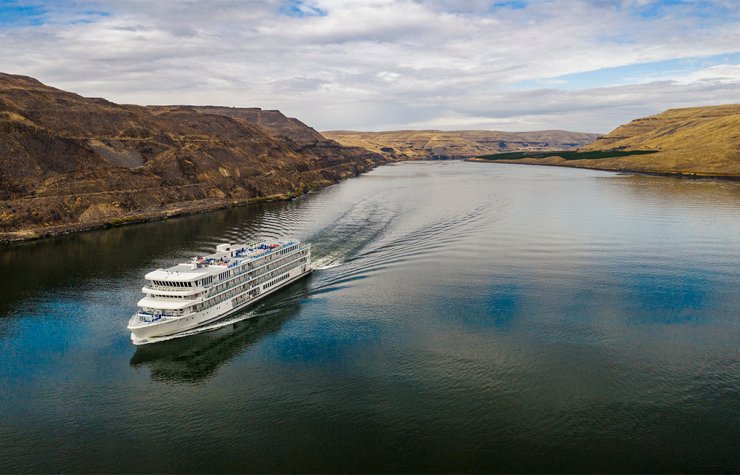 After dinner there's often a music performance or history talk. On my cruise, passengers would gather some evenings in the spacious window-walled Cascade lounge for a Lewis and Clark history lesson from the dynamic Weber, who dons handmade frontiersman-style clothing, including a beaver-felt hat, plus moccasins, trousers and a coat of buckskin with deer-antler buttons. He answers questions on everything from the tools they used for hunting to Lewis’ depressive tendencies. Weber has cruised this river more than 500 times, by his count, and some who'd traveled with him in the past signed on for this trip because they knew he'd be aboard.

Once the evening entertainment wraps up, by 10 p.m., the ship is calm and quiet, most passengers settled in their cabins with their big flat-screen TVs and private balconies.

The overall mood is of relaxation. One beautiful brisk evening I watch the sun setting over a stunning rocky gorge from the vast upper deck, which is full of comfy couches, and I am alone but for one woman who has a long gray ponytail and is practicing yoga. Throughout the cruise I don't notice anyone restlessly scrolling through a smartphone (Wi-Fi is spotty, anyway), as is the norm in my home city, Washington, D.C. And I see only a few guests using the tiny exercise room during slow periods; they're more likely to be reading a book or chatting over drinks in one of the many lounge areas.

As for why to choose this trip over the more exotic itineraries abroad? “Just about all our trips have been outside the country,” George Montalván, 77, a former economist and international-banking consultant from Miami, says over a leisurely lunch aboard American Song with his wife, Patricia. “We've traveled in the Far East, including Vietnam, and did a three-week cruise in Europe. Now we're curious about the U.S.”

—With additional reporting by Andrea Barbalich