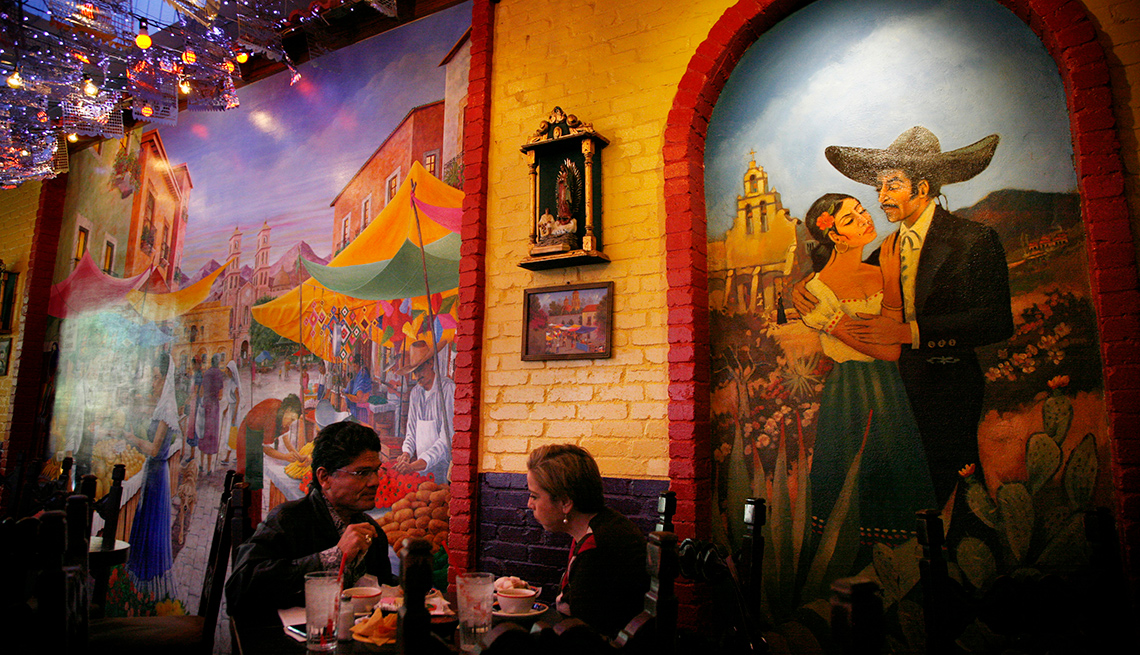 San Antonio is the epicenter for Tex-Mex cuisine, where arguably the first Tex-Mex restaurant — the Original Mexican Restaurant — was opened in 1899 and where the humble home cooking of South Texas meets that of Northern Mexico. You won’t find a plate of Tex-Mex enchiladas — filled with shredded yellow cheese and slathered in Texas chili gravy — inside Mexico, but they’re a must here. So is a breakfast taco — a thick flour tortilla cradling a scrambled egg filling. Such local creations, the backbone of this authentic regional cuisine, are as emblematic of San Antonio as the Alamo itself.

But don't stop at enchiladas and tacos. A new crop of chefs, taking old traditions to the next level, is creating an exciting new wave known as Tex-Next.

Although walking in and getting a table is often possible during the week, booking a table at the most popular restaurants on weekends is a must. Most restaurants use Open Table, an online reservation service, while a few can be booked through their own websites.

You can’t leave San Antonio without sampling some of its beloved local specialties. Bask in a couple of breakfast tacos at Taco Haven, make a pilgrimage to honky tonk-retro Ray’s Drive Inn for a plate of puffy tacos and dive into the cheese enchiladas at Los Barrios, Jacala or the stylish but loud Rosario’s in two locations. For Tex-Mex with a modern twist — duck chalupas, anyone? — try Ácenar.

You’d think you were back in Old Mexico at several outposts: seafood from the state of Sinaloa at El Bucanero, Mexico City-style street food (think enmoladas, or chicken enchiladas in mole poblano) at Cascabel Mexican Patio, and contemporary Mexican (plus a few old-school Tex-Mex) dishes at La Fonda on Main.

Don’t forget drinks to go with your queso-fueled happy hours. Try an upscale margarita at El Colegio bar or Las Canarias restaurant at La Mansión del Rio hotel or the shaken margarita at Rosario’s. And slowly sip a classic michelada, a beer with lime juice, powdered chili and tomato juice, at Mi Tierra or Chisme.

The newest iteration of San Antonio’s evolving cuisine celebrates its cultural roots with a generous dose of creativity. Tex-Next isn’t a style so much as a state of mind.

As expected, the Pearl is chock-a-block with acclaimed chef-driven eateries. At Il Sogno Osteria,four-time Beard Award finalist Andrew Weissman offers upscale Northern Italian trattoria fare. Esquire magazine christened the Granary 'Cue & Brew's chef-owner Tim Rattray as “the future of barbecue” for his modernist barbecue creations. Less awarded but no less excellent are the modern Gulf Coast dishes at Southerleigh and the Peruvian-Asian delights at Botika, which makes five — count 'em — Peruvian restaurants in town. Latin American flavors come together around live fire at Nao, the flagship restaurant of the San Antonio branch of the Culinary Institute of America.

Appearances aside, the restaurants of the River Walk and downtown aren’t all tourist traps. Seven-time Beard nominee Bruce Auden, the godfather of the city’s contemporary culinary scene, serves upscale modern American fare, such as 11-spiced Hill Country venison and grilled quail with tamale tart, at Biga on the Banks. Beard semifinalist Michael Sohocki creates magic with hyperlocally sourced dishes made without any postindustrial food-prep machines (that is, no blenders or processors) at Restaurant Gwendolyn. And Food Network Star finalist Luca Della Casa cooks the dishes of his native Northern Italy with love and finesse at Nonna Osteria.

Other notables downtown include the Southwestern favorite Boudro’s, where guacamole prepared tableside delights crowds; Mediterranean inspirations at Bella on the River; and upscale Texas dishes at Las Canarias. Hankering for a superb steak? You’re in Texas, after all, so try Bohanan’s, which Texas Monthly magazine called the No. 2 steakhouse in the state.

Even Southtown has turned into a foodie destination of its own with an array of standout restaurants — the Texas brasserie the Maverick touts “make your own rules” — and neighborhood favorites.

Ways to save: Lunchtime offers a chance to sample renowned restaurants at lower prices. Overall, though, even San Antonio’s most expensive tables aren’t as costly as in many other larger cities. In addition, many top places offer tasty and reasonably priced bites during happy hour. If you want to enjoy some inexpensive local flavors, remember that a couple of breakfast tacos and a coffee with free refills costs about five bucks, and most Tex-Mex combo plates and coffee or tea cost less than 10.