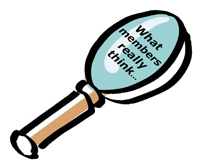 The AARP Member Opinion Survey (MOS) is the largest single survey of AARP Members.  This dual mode survey is conducted every few years and informs AARP about the opinions, perceptions, and experiences of its members. Beginning with the initial effort in 1994, the MOS collects data from thousands of AARP Members in order to gain better insight into what members care about most; their top interests and concerns, how they spend their time, what their life experiences are, and much, much more.

Of the more than 147,000  members across the nation asked to participate in this study between April and July (2016), approximately 23,000 responded with their experiences, perspectives, interests, and opinions.  The large response base enables AARP to glean insights not only about the entire membership, but also among a wealth of subgroups and populations including age groups, diverse populations, and many other segments/groups (income, gender, political perspectives, etc.).

Highlights of the responses show that member needs/wants have been fairly consistent over time with their top concerns being focused around health/financial security and their top interests focused around healthy living and enjoying life.  Challenging life events impact members lives more as they get older – some of the more common hurdles include caregiving, reduction in financial wellbeing, deaths of family/friends, and chronic health issues.  Technology adoption continues to grow quickly among members, and the smart phone has become the most common technology device, surpassing desktop and laptop computers.  Additional resources/links are available for more detailed findings.

The 2016 MOS was a modified-Dillman methodology, consisting of multiple contacts by mail where members received an advance notification letter that included a URL and password offering the option to complete either a mailed questionnaire or to go online to complete the survey. The study was conducted from April 7th to July 11th 2016 and covered the entire US, Puerto Rico, Guam, and the Virgin Islands.  Sampling size was 147,327, stratified by age, state, race and ethnicity.  The mailed surveys were available in both English and Spanish while the online version also offered Korean, Chinese, and Vietnamese language options.