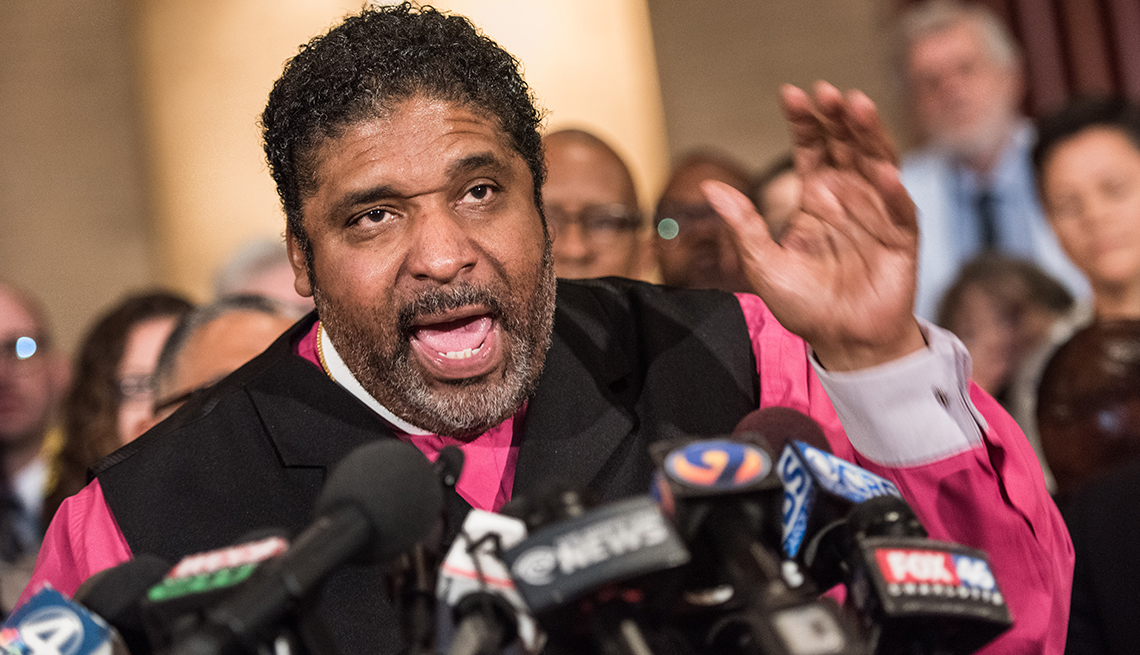 The Rev. William Barber II took his place on the front lines early on.

Born two days after the March on Washington in 1963, his activist parents moved the family from Indiana to North Carolina, where Barber helped desegregate the public schools. Over an illustrious civil rights career, he's broadened the agenda from black and white to more clearly include women, LGBTQ people, children, immigrants, the sick and broader communities of color.

Here he reflects on the Rev. Martin Luther King Jr., the civil rights movement 2.0 and the work yet to be done.

If King were starting out today, what social ills would top his agenda?

Five injustices interlock to keep America from becoming what we hope it to be: poverty, systemic racism, ecological devastation, a war economy and a distorted moral narrative that tells some people God blesses all of this. That's the work Dr. King would take on because that's the nature of who he was. We who believe in freedom and justice and mercy cannot rest until those goals are attained.

What are your thoughts about the circle of overlap of the work King did and what you do?

Dr. King was a minister in the same tradition as my father, who passed it down to me. It says you must preach good news to the poor.

Poor in Jesus’ day meant those who've been harmed by unjust systems. Throughout American history, elites have held power by pitting people against one another: Tell the white man he's better than the black man or have the plantation owner convince poor whites to fight for a system that keeps them down, too, and you subvert the promise of democracy.

This tactic also misuses religion to demonize immigrants and poor people, while suppressing women. Repairers of the Breach builds fusion coalitions to unite people across lines of division.

• Since 1993, pastor of Greenleaf Christian Church, Disciples of Christ, in Goldsboro, North Carolina

• Since 2005, NAACP national board member

• Since 2017, president emeritus of the North Carolina NAACP

• Since 2018, cofounder of the Poor People's Campaign: A National Call for Moral Revival

When I was president of the North Carolina NAACP, we did a poverty tour across the state. I'll never forget going down into the woods to a camp where people were living together in makeshift tents. They swept the dirt to welcome us and then shared stories of how layoffs and health care emergencies had landed them there.

As we were leaving, a woman grabbed my arm and said, “I might never see you again in this world, but please remember me.”

I've heard thousands of stories as we've traveled this nation to link up with the 140 million Americans who are poor. … When I close my eyes at night, I remember that woman. We cannot be one nation under God with liberty and justice for all if we don't uplift people like her.

In 1968, King sought to bring people who were poor to the nation's capital to be seen and heard. What's the purpose of June 20's Mass Poor People's Assembly and Moral March on Washington?

Like the campaign in 1968, we have committed to a mass mobilization in Washington, D.C., to demonstrate the power of poor.

We are building a national stage for people to speak in their own words. We are sending them back to their home states with a plan to shift the power not in just one election but also in the priorities of every politician.

We have launched coordinating committees in 43 states that are mobilizing local groups to become educated, to register to vote and to seek justice. We are building fusion coalitions to revive the heart of this nation. Anyone can participate.

You were elected to the NAACP Youth Council at 15. How have your thoughts about activism evolved?

But I learned that I need more than my own strength to fight on. And I learned through my own physical ailment that I need the help of others to continue to be of service. [In his early 20s, Barber was diagnosed with ankylosing spondylitis, an inflammatory disease with no known cure that can cause small bones in the spine to fuse.]