'Emphasize not Negro history, but the Negro in history,' Carter G. Woodson said 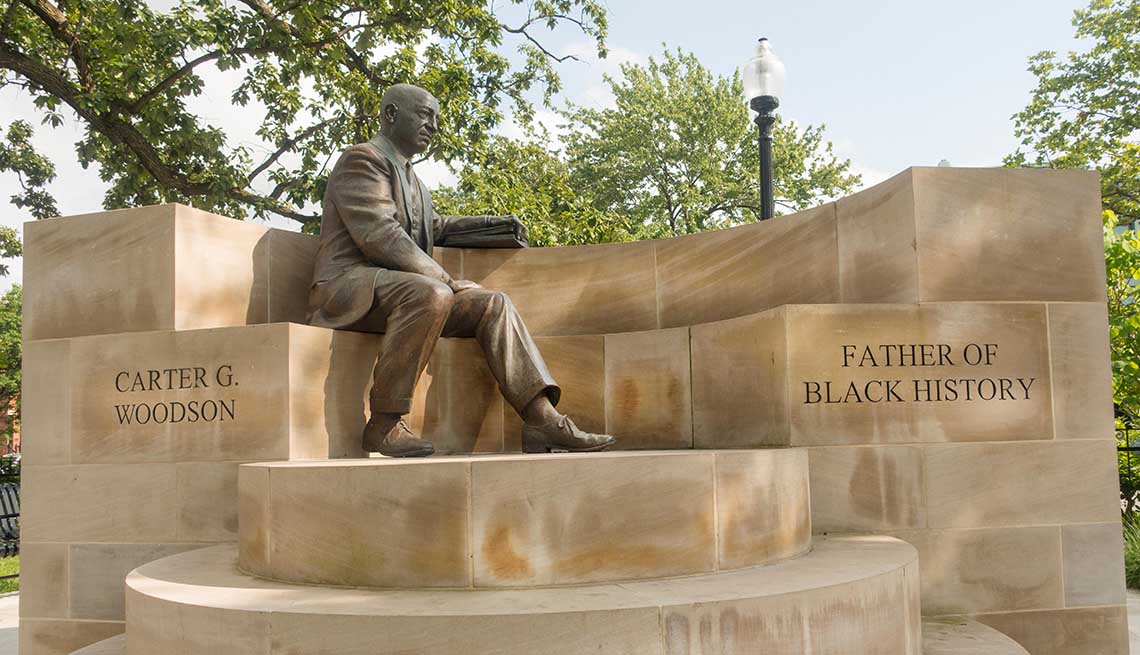 Carter G. Woodson Memorial Park in Washington, D.C., is a block north of the home of the father of black history at 1538 9th St. N.W. That townhome is now a national historic site.
Randy Duchaine / Alamy Stock Photo
By:
Stephanie Mansfield
January 27, 2020

The scholar who became known as the father of black history didn't envision a different history for each race and ethnicity.

Instead, what historian Carter G. Woodson saw was a missing piece in the puzzle of humankind. And he worried that the artifacts and evidence of blacks in American culture would disappear if they weren't preserved, says Burnis Morris, the Carter G. Woodson professor of journalism and mass communications at Marshall University in Huntington, West Virginia.

"Woodson believed there was just one history, not a separate history for blacks and whites and Asians, but one,” says Morris, author of Carter G. Woodson: History, the Black Press, and Public Relations (University Press of Mississippi, 2017). “Woodson went about correcting the record, and many of us believe it remains to be corrected.

"Woodson got the world to confront this issue,” Morris says.

Woodson came late to the calling that would consume his adult life. He was born poor during the Reconstruction period in rural Virginia, one of nine children of formerly enslaved parents who were skilled workers but uneducated.

First, he had to help raise crops to feed his family, going to school only when the weather was bad. Then his family moved to West Virginia, where Woodson earned money as a coal miner.

Only at age 20 was he able to start high school. As he advanced in his collegiate studies through two bachelor's degrees, a master's and a doctorate, he saw that blacks, classified as Negros in the 1900 census, were not included in the history books. Woodson began to worry that black culture was being ignored or misrepresented, Morris says. 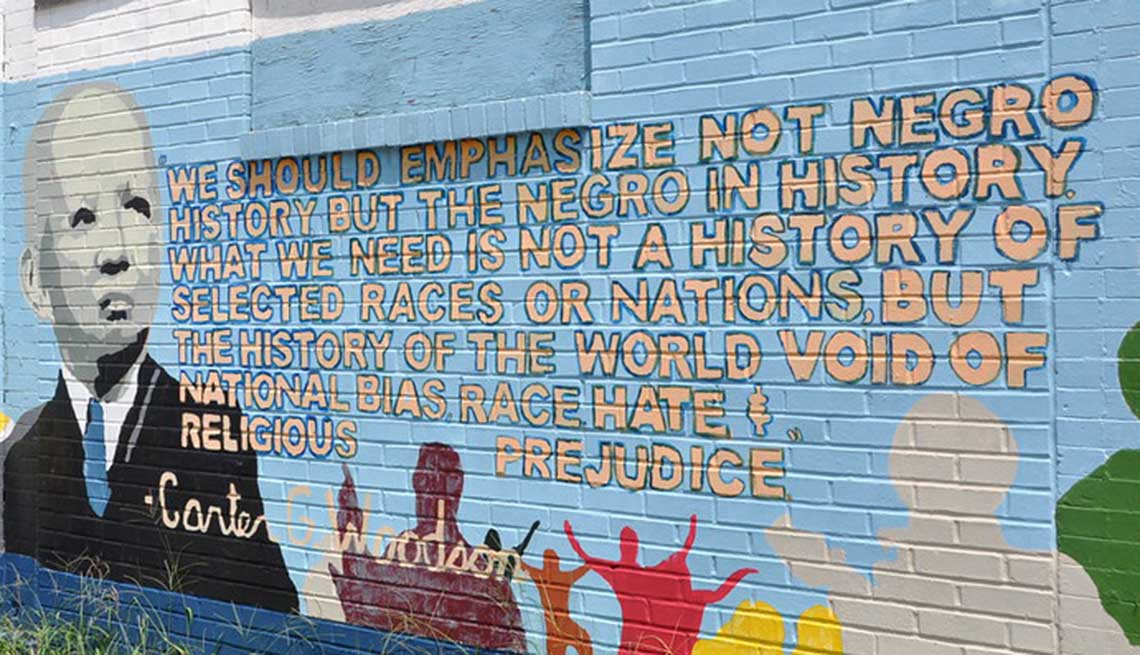 This Carter G. Woodson mural, photographed in 2009 at 1625 9th St. N.W. in Washington, D.C., was removed during a renovation of the building near Woodson's longtime home.
Kevin Harber / Flickr / Wikimedia Commons

In 1915, a couple of weeks after Chicago's celebration of the 50th anniversary of the abolition of slavery, Woodson and four colleagues founded the Association for the Study of Negro Life and History, later headquartered in his own Victorian townhouse in the District of Columbia's Shaw neighborhood. A little more than a decade later, in 1926, Woodson had the idea of combining two birthdays already widely celebrated among black Americans — Feb. 12 for President Abraham Lincoln and Feb. 14 for abolitionist Frederick Douglass — into Negro History Week, says Daryl Michael Scott, a history professor at Howard University in Washington and a former president of what is now the Association for the Study of African American Life and History.

"Woodson was very clever,” Scott says. “He built up on two preexisting celebrations. Black Americans had been celebrating Lincoln's birthday since his assassination, mostly with the Republican Party. Then when Douglass died in 1895, his birthday became an event. Then it gets transferred into a week. Woodson changed the script."

Black activism in the late 1960s, starting with the Black United Students at Kent State University in Ohio, helped transform Woodson's week into a month. President Gerald Ford made the expansion official in 1976 with a presidential message in conjunction with the nation's bicentennial. 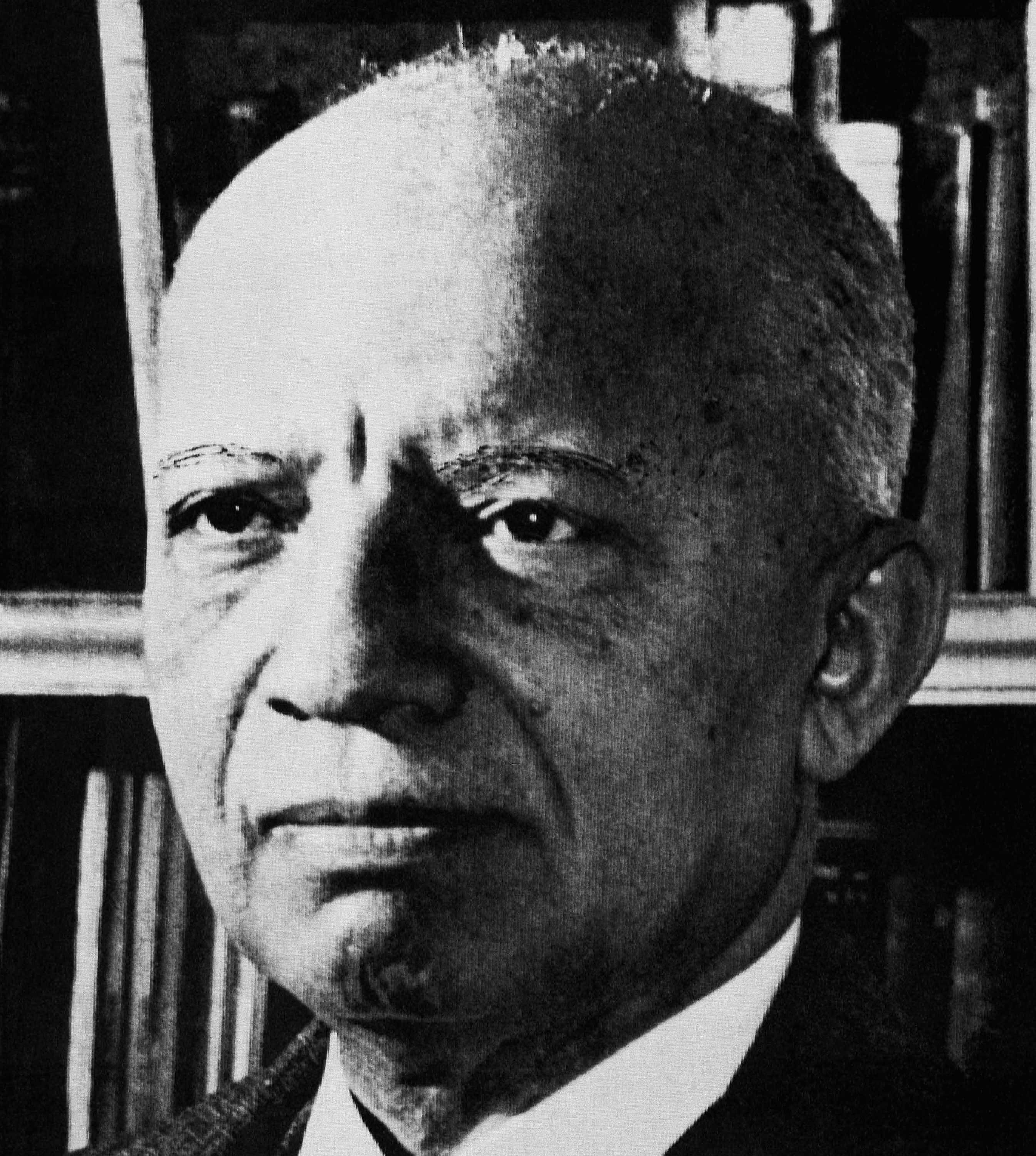 In the early years of Negro History Week, Woodson got people talking about the black men and women who contributed to human civilization by promoting the observance in black-owned newspapers across the country. His organization helped unearth and document these stories while developing classroom materials so teachers could spread this new knowledge.

"Those who have no record of what their forebears have accomplished lose the inspiration which comes from the teaching of biography and history,” Woodson himself said.

Woodson never married but was not the always-serious academic that young poet Langston Hughes described while working briefly for the Negro history association in 1924.

"He wrote newspaper columns, played tennis and loved Paris, where he had studied at the Sorbonne and attended the theater,” Scott says of Woodson. “He traveled and held parties. He was not this dour guy alone with the gaslight on in his study."

Importance of good and bad history

Woodson was determined to convince the general public to embrace the past — including the dark chapters on slavery and segregation — so the African American experience would take its rightful place in history books.

"We should emphasize not Negro history, but the Negro in history,” Woodson said. “What we need is not a history of selected races or nations, but the history of the world void of national bias, race hate and religious prejudice."

Yet “black history remains segregated and has not been integrated,” Morris says. “People who wonder why we need a black history observance in the 21st century provide evidence that African American contributions are not fully appreciated."

They know little about the parts that blacks have played in human history and believe that the problems with a lack of recognition were resolved 50 years ago after the civil rights movement, he says.