As many as 1.5 million children — 1.2 million of them Jewish — died in the Holocaust. At Auschwitz, the largest of the Nazi killing camps, only 52 children under age 8 survived. I was one of them. My paternal grandmother, Dora, protected me fiercely. The average life span of a child at the complex was only two weeks, but I survived for seven months because I spent most of my time in hiding. In a famous photograph taken by one of the Russian soldiers who liberated the camp on Jan. 27, 1945, you can see me, at age 4, being carried toward the open front gate in my grandmother's arms.

Since I was so small, I don't have a lot of memories of life in the camp. I remember the smell of the air — it was the smell of burning flesh. I remember Nazis shouting at me in German. And when I go on crowded subways, it reminds me of the cattle car ride to the camp. But most of the things I remember are stories my relatives told me after the war. My mother told me she would come into the children's bunk to share her bread with me, and when she was caught, she would get beaten. She showed me the scars on her head. She eventually got sent to a different camp.

When my grandmother and I returned to our town in Poland after the war, people were living in our house and they wouldn't give it back. We ended up sleeping in a chicken coop. But we did find my mother there. Not so my father, brother and maternal grandparents: They were all killed by the Nazis. But my mother never gave up her optimism for the future. I still have a watch she gave me. On the back it says, in Hebrew, “This, too, shall pass." 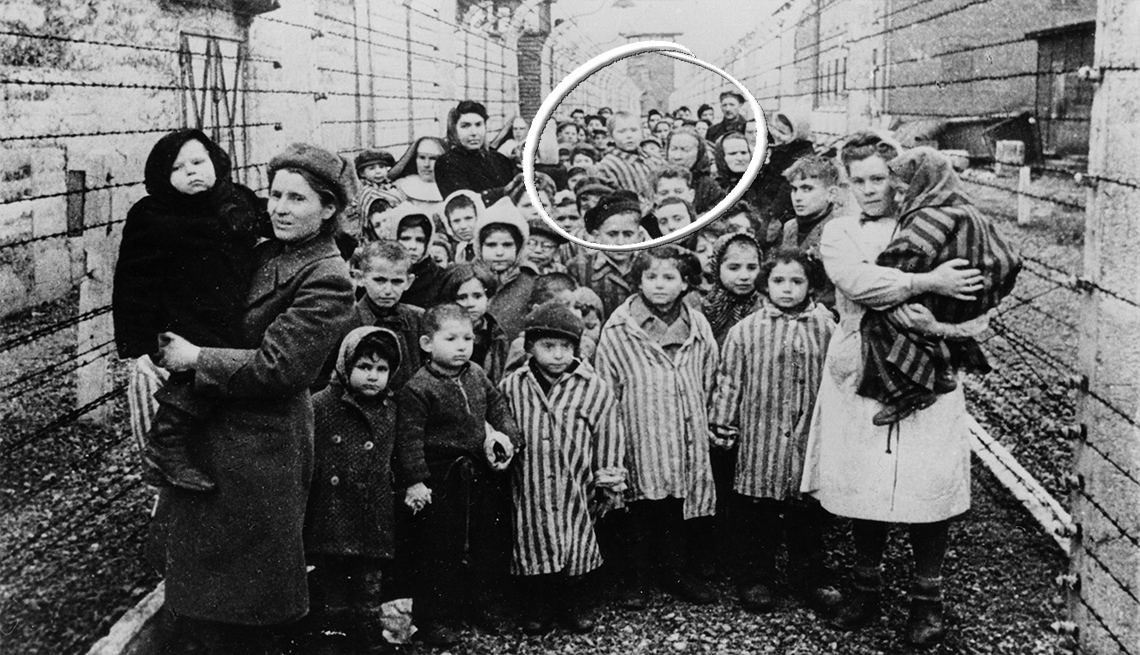 Michael Bornstein is carried by his grandma to the front gate of Auschwitz after the camp was liberated.

After spending several years in a camp for displaced persons, I and a few family members made our way to the United States. I was 10 years old. I worked in a drugstore for 25 cents an hour. Later, I worked as a camp counselor, a busboy, a head waiter and also went to school. I got my U.S. citizenship when I was 17. It was one of the proudest moments of my life because up until then I didn't belong anywhere, and U.S. citizenship made me feel like I belonged to something great.

I love America. I cannot think of a better country to live in. Still, I wasn't always safe from anti-Semitism here. When I started my job after getting my Ph.D. in pharmaceutics, I was in the locker room putting on my lab coat. A guy next to me said, “Can you believe they've been hiring so many damned Jews around here lately?” He obviously didn't know I was Jewish. Hate is hard to erase. That kind of open discrimination got quieter over time, but I see it rising up again. I fear that a rise in anti-Semitic language and jokes about minorities have led the next generation to feel apathetic about bigotry. If you look back at the lead-up to the Holocaust, it started with just bullying and scapegoating, with jokes and propaganda. People don't understand that what might seem like a harmless or ignorant joke can eventually create a more dangerous world.

As I write these words, I plan to travel to Auschwitz-Birkenau on Jan. 27. I really dread going back there, but I will have a lot of support from other survivors. Those of us who were there need to testify to what happens when evil and bigotry go ignored. I definitely think something like the Holocaust could happen again. People are people, and there are dictators in this world. If they need a scapegoat, they can find a scapegoat. And I'm very concerned about a 2018 study that found that two-thirds of Americans ages 18 to 34 didn't know what Auschwitz is. The only way we're going to stop the divisiveness in this world is to remember what happened and realize that we're all in this together.

My life's dream was to create the kind of family I never got to have as a child. I'm the father I never got to know. Every birthday or Father's Day that comes around, my family asks what I want, and I say I already have what I want. I think if I found myself face-to-face with a Nazi today, I would want him to know that evil didn't win. Hate did not win. I truly believe the best revenge has been to live a life of happiness.

— As told to Barbara Leap

Michael Bornstein, 79, is a retired biotech scientist. With his third child, Debbie Bornstein Holinstat, he coauthored the memoir Survivors Club: The True Story of a Very Young Prisoner of Auschwitz.