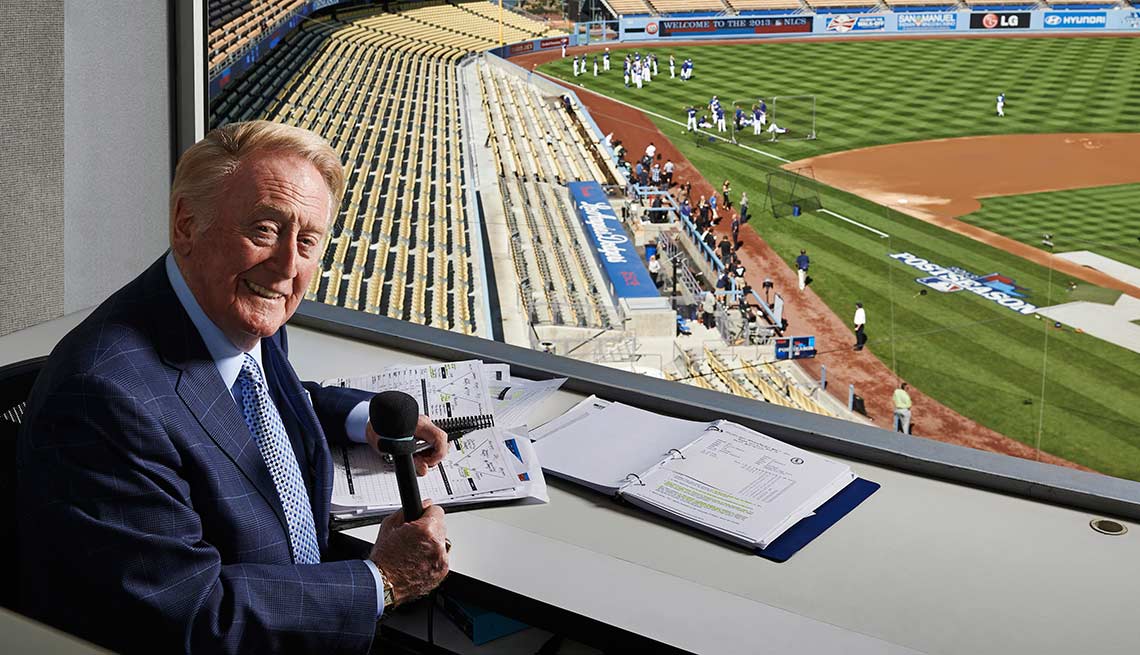 Vin Scully, baseball broadcaster, says his 67th season with the Dodgers will be his last.

When you were a young broadcaster with the Brooklyn Dodgers, Dylan Thomas published the poem, "Do not go gentle into that good night.… Rage, rage against the dying of the light.'' Now 88 and still at it, do you identify with that sentiment?

Oh, absolutely. Thomas was talking about leaving this mortal life. When you love what you do and eventually realize you're going to give it up, you try to squeeze everything you can out of what time is remaining. This year, I'm still raging against the light.

What has been your secret for endurance?

I really don't have any secrets. God has been very kind to me, allowing me my years, my health and a job that I love. When you are young, you take good health for granted. As I began to get older, I became more conscious of my health. I've been blessed that I only missed a couple of games over the years.

How will you spend your days away from Dodger Stadium?

I will be very honest with you. I started working when I was 11, selling newspapers in the Bronx. I have been working for 70-some years. The thought of turning off the key to the engine is somewhat terrifying. I like to read. How much I can read in retirement, I don't know.

You called dozens of World Series games, a dozen All-Star games, 20 no-hitters and three perfect games. What was the greatest goose-bumps moment?

Doing the World Series with the great New York Yankees broadcaster Mel Allen in 1955, when I was younger and more impressionable, was a great moment. The Dodgers defeated the Yankees and gave the borough of Brooklyn its first and only World Series championship.

Who was the best baseball player you ever saw who didn't wear Dodger blue?

Certainly in the National League, the No. 1 player was Willie Mays. He was a great player in center field who also could have been a great player at almost every other position.

The Dodgers made Jackie Robinson the first black Major League player three years before you arrived. Your first impression of him?

He was easy to smile, easy to laugh. He was good natured. One time we ice-skated together, which was pretty hysterical because he never had. But once a game had started and he was between those baselines, how he could persevere with the abuse he heard from the opposition — and keep his cool — was remarkable.

If you had a say, would you vote to induct Pete Rose, who admitted to betting on baseball, into the Hall of Fame?

I wouldn't. Should he be in? He should be. But by his own hand, he locked the door and kept himself outside.

As a native New Yorker, what was your greatest apprehension when the Dodgers relocated to Los Angeles in 1958?

First, I was relieved and thrilled that I still had a job. Secondly, it was bittersweet. I was leaving everybody I knew, including my college friends, and starting anew. I was fearful because I had settled into New York and was accepted. I worried about what the reaction would be in Los Angeles. 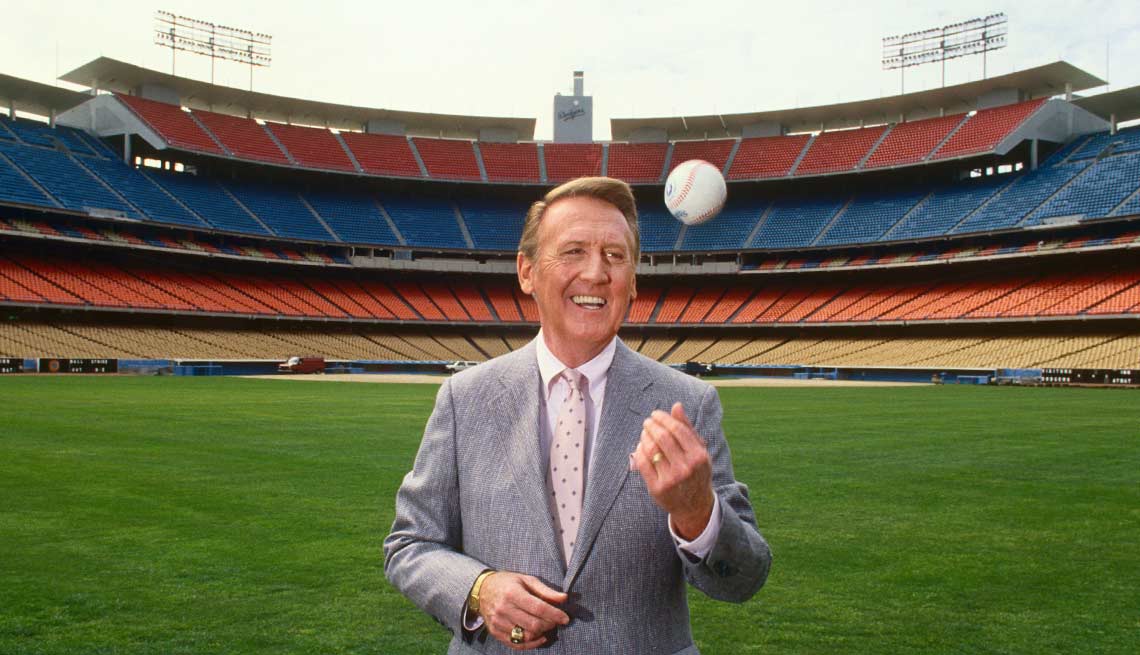 Vin Scully, pictured here at Dodgers Stadium in 1990, was just happy he still had a job when the Brooklyn Dodgers moved to Los Angeles in 1958.

Do you ever listen to some broadcasters and think to yourself, "Please, shut up!"?

No. My first Dodgers broadcast partner, Red Barber, told me something that just shocked me: "Don't listen to other broadcasters and pick up their phrases because you bring something into the booth that no one else can — yourself." It was probably the greatest single piece of advice I ever received. I stayed true to Red's advice out of fear that perhaps the Dodgers wouldn't need me anymore.

Countless baseball announcers are considered to be "homers" who show bias for their local teams. You rarely even use the pronoun "we" during Dodger games. Why?

When I started in New York, you had three teams and some marvelous announcers: Red with the Dodgers, Mel Allen with the Yankees and Russ Hodges with the Giants. An awful lot of people listening to our games were not Dodgers fans. Red was right to think of the sponsors: We're not just trying to sell cigarettes and beer to Dodgers fans, we're trying to sell it to all fans. Plus, I try very hard to control my emotions.

Could anything make you reconsider coming back for 2017?

This year is pushing it. I love what I do so much I have to try it this year, but that will be enough.

Jon Saraceno is a freelance journalist living in Northern Virginia.

A conversation with Neil deGrasse Tyson