In a New York City church overflowing with red and white poinsettias, David Eisenhower, the grandson of former President Dwight Eisenhower, and Julie Nixon, the daughter of the newly elected president, Richard Nixon, were married 42 years ago today, uniting two of the country's most powerful political families.

The couple — 1968's celebrity sweethearts — were determined to keep the ceremony private. "Whether my father won or lost, we had no desire to be married in the White House," Julie Eisenhower told the AARP Bulletin in a joint telephone interview from the couple's home in Berwyn, Pa., near Philadelphia. "We were not interested in being minor celebrities or in the hoopla." 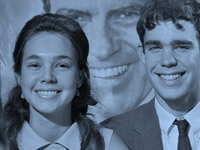 But there was one other matter of great concern. David Eisenhower, a lifelong sports fan, didn't want a repeat of what happened in 1966 when the broadcast of a baseball game was canceled to cover the wedding of President Lyndon Johnson's daughter Luci.

"No, no, no," David protested. "As a baseball fan, I felt disoriented enough on that Saturday to have it pass through my mind, 'Geez, I'm glad I'm not causing this.' So I applied the lessons." Both Eisenhowers have sought a life away from the limelight ever since. They declined opportunities to run for public office. "Whenever push came to shove, we always thought about the children," Julie Eisenhower said, referring to their three children, now adults. "Both of us having been brought up in such public families, we just really wanted something different for our children."

The couple have spent their lives writing, teaching and lecturing. Julie has written several books, including Pat Nixon: The Untold Story. David is director of the Institute for Public Service at the University of Pennsylvania's Annenberg School for Communication. His first book about his grandfather, Eisenhower at War, 1943-1945, was a Pulitzer Prize finalist in 1987.

Going Home to Glory: A Memoir of Life With Dwight D. Eisenhower, 1961-1969, published in October, marks the first time they've worked together on a book. The book is an intimate insider's view of Ike and his wife, Mamie, as they retired to their farm in Gettysburg, Pa., where David's father, John, lived with his family. David was named after his grandfather (his full name is Dwight David Eisenhower II), and his grandfather named the presidential retreat Camp David after his grandson.

"The real story as I see it … is what grandparents can do," David said. "He gave me gifts, real gifts, the gift of assurance that I had this great ally in the world and the gift of his thoughtfulness in the form of letters."

The book, which David began researching in 1976 and then shelved, is enlivened with personal remembrances of his grandfather and with excerpts from Julie's journal. In an anecdote illustrating Eisenhower's legendary temper, David, who worked on the farm during the summers as a teenager, recalls being fired by his grandfather for taking an overly long lunch hour to play cards. Hours later, he wrote, Ike's Chrysler Imperial pulled up to David's front door to pick him up for a golf date. Not a word was spoken until the third hole. "Near the green, Granddad broke the silence. 'I allow all of my associates one mistake a year. You've had yours,'" David wrote. He was rehired that afternoon.

Later in the book, David recounts how, as his wedding grew closer, "Granddad offered me one hundred dollars if I would cut my mop of curly hair into a neat military style. Just before the wedding, I got a light trim. It wasn't enough for Granddad, and he didn't pay."

Have people, particularly those born after Eisenhower's death in 1969, forgotten about him? "There is less interest in Eisenhower than a decade ago," said Julie.

"He's become more of a war figure than a political figure," said David. "The future will use and dispose of the memories of people that we knew as history sees fit. My interest in the story is personal. It's a grandfather-grandson kind of story."

Julie, one of the most stalwart and visible supporters of Richard Nixon during the Watergate scandal and his 1974 resignation, said she is at peace with her father's legacy. She points to his accomplishments, including ending the Vietnam War, starting the Environmental Protection Agency and establishing relations with China. "When all the histories are written," she said, "the Watergate chapter will definitely be there, this is part of the history, but he will be looked at for some momentous things that happened in a very eventful presidency."

Now 62, the Eisenhowers are parents of three children, Jennie, 32, Alex, 30, and Melanie, 26. Alex, whose 3-year-old daughter, Kaia, is their only grandchild, assisted with research on the book. Jennie is an actress based in Philadelphia who plans to be married next July. Melanie is a child-life specialist who works in a hospital in New York City. She was married just last week.

The couple are adoring grandparents who frequently babysit their granddaughter. "I think the power of a grandchild is it taps an instinct that people later in life also have towards … the world of nonprofits or charities," David said. "They want to leave a better place. This child, you know, I just want to lavish her with everything I can think of. A selfless instinct comes to the fore."

They encourage others to collaborate on stories about grandparents or other family members, something their own family did for Mamie Eisenhower in 1976. "One way to start," he said, "is to solicit relatively small contributions by everybody who knows somebody." If each person writes just a page, he said, "all of a sudden you realize you have a story."