Michael Dukakis took the stage in Boston's World Trade Center 23 years ago today to concede the presidential race to Vice President George H.W. Bush, who had won by a landslide.

As the campaign anthem, Neil Diamond's "Coming to America," thumped through the hall, Dukakis and his wife, Kitty, a smile frozen on her face, hugged their children and looked out over the crowd. 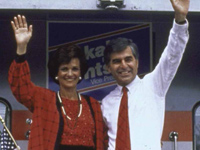 Presidential candidate Michael Dukakis and his wife, Kitty, on the campaign trail in 1988.

Dukakis urged them to support the new president, a disappointing end to 18 months of grueling campaigning.

But even tougher personal challenges lay ahead for the couple.

In a telephone interview with the AARP Bulletin from his office at Northeastern University in Boston, Michael, now 78, recalled, "I remember Fritz Mondale saying to me for months after he lost in '84 he'd wake up at 2 in the morning, no matter what. Physically, as well as emotionally, it takes time to get over it."

For Kitty, now 74, the campaign's aftermath was an especially painful and lonely time. "The next morning, Michael went back to work at the State House," she wrote in Now You Know, her searing 1990 memoir. "I was going someplace, too: downhill." Although Kitty revealed during the campaign that she had sought treatment for addiction to diet pills years earlier, she had yet to confront her problems with drinking and depression, both made worse by the "brick wall of defeat," as she put it.

She began drinking in the morning until she passed out. When she woke up, she would repeat the process. By February 1989, she had checked into a treatment facility. Several relapses followed, including a much publicized hospitalization after she drank rubbing alcohol on the one-year anniversary of Michael's defeat. She relapsed repeatedly that year, overdosing on Tylenol with codeine and later downing mouthwash, after-shave, nail polish remover and hair spray.

Back at the State House, Michael was contending with problems of his own. "I came back to a situation where the '89 to '91 recession was beginning to hit. I had to deal with that. It was not a fun time for either one of us during the last two years of my governorship," he said. In 1989 he decided not to run for a fourth term.

After suffering about 17 years of depression and alcoholism, Kitty, in desperation, tried what she called "the only thing left" — electroconvulsive therapy. Her first treatment was in 2001 on the couple's 38th anniversary. In the car on the way home after her treatment, Kitty, who had been depressed for months, stunned her husband when she suggested they go out to dinner to celebrate. She continues receiving maintenance ECT therapy once a month and has been free of depression ever since.

Kitty took her decision to undergo shock treatments public in her 2007 book, Shock: The Healing Power of Electroconvulsive Therapy, and is now deeply involved in forming a national support group for ECT patients. "I'm very grateful," she said of the therapy, and feels "much better, very much so."

When his term as governor was up, Michael, who'd taught at Harvard between his first and second terms, returned to teaching — at Northeastern University in the summer and at UCLA in the winter. "I loved teaching and I really enjoyed it, so I pretty much decided I wanted to go back to teaching. And that's in essence what I've been doing for the past 20 years, and it's been great," he said.

Kitty also returned to academics, earning a master's degree in social work from Boston University in the mid-1990s. "I worked for several years professionally with refugees and immigrants at the International Institute of Boston," she told the AARP Bulletin. "I retired from that job several years ago, but I am still active in immigrant and refugee work as a volunteer."

Next: Why their marriage has lasted almost 50 years.  >>

Secret to a successful marriage

The conventional wisdom about the success of the couple's 48-year marriage is that opposites attract. The story goes that Michael is serious, Kitty is funny and outspoken. Michael's frugal, Kitty loves to shop. Michael is "the most positive thinker I have ever known," Kitty has said, while she's battled depression for much of her life. But Michael says the idea is overblown.

"I think the notion that we're polar opposites is kind of a bit silly," he said. "We have a lot of common interests. It is true that I am more frugal than Kitty. She could revive the U.S. economy single-handedly if she wanted to do it," he jokes. For her part, Kitty said, "I think the major reason our marriage has lasted close to 50 years is the mutual respect we have for each other and the passion we both share. We also have a lot of fun and have been blessed with three fine children and eight grandchildren who keep us going all the time."

Their three children are John, 53, Andrea, 45, and Kara, 43. John, Kitty's son from her first marriage to John Chaffetz, is a former actor who appeared in Jaws 2. He goes by the last name Dukakis. He now works for Hill Holliday, a Boston advertising agency. John's stepbrother, Jason Chaffetz, represents Utah's third district as a Republican in the U.S. House of Representatives. Andrea is a reporter and producer for Colorado Public Radio. Kara is the associate director of the Youth Data Archive at Stanford University's John W. Gardner Center near San Francisco.

Michael and Kitty still enjoy good health. Michael walks to work every day from the couple's home in Brookline, a four-mile round trip, and Kitty stays fit with Pilates. "I'm married to the best-looking Social Security recipient in America," Michael said.

Politics is still never far from the couple's minds. Michael has knocked on doors for his son-in-law, Kara's husband, David Onek, who is running for district attorney of San Francisco. The Dukakises supported President Obama in 2008 and continue to be strong supporters.

"Look, I think he's done a hell of a job under very difficult circumstances," Michael said. "He's got a Congress now which is apparently more interested in defeating him than in reviving the nation. I have a lot of respect for him. He inherited a mess. I'll do whatever I can for him."

Also of interest: What Washington's fiscal wars mean to you. >>