Facts: If you learned in school that Thanksgiving started with the Pilgrims and the Indians feasting together in New England, your education might have been over-simplified. 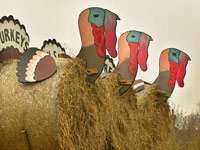 Did Thanksgiving start with Pilgrims?

It's true that such a feast took place — and it was a doozy of a dinner. "For three dayes we entertained and feasted," wrote one colonist who experienced the 1621 event firsthand. They even ate the traditional bird, according to another, who recalled a "great store of wild Turkies."

But this type of event wasn't what the Puritans would have called "thanksgiving." To them, the word meant prayer. Many early American communities observed solemn, prayer-filled days of thanksgiving during the 17th century.

An earlier colonial one happened on Dec. 4, 1619, a year before the Pilgrims would arrive at Plymouth Rock, when colonists landed on what's now the coast of Virginia to found Berkeley Hundred (now Charles City). They were under strict orders from the London Company about what to do when they got there: "We ordaine that the day of our ships arrival … shall be yearly and perpetually kept holy as a day of thanksgiving to Almighty God," read the edict. The Pilgrims might have feasted, but these colonists used the word "thanksgiving" first.

But another group may have beaten even these colonists to claim the first Thanksgiving. Two decades before the Virginia landing, a group of Spanish colonists prayed and feasted in 1598, giving thanks for their arrival at the waters of the Rio Grande after making a new trail across the Chihuahuan Desert to what became El Paso del Rio del Norte. The site of this celebration was originally on the Mexican side of the river, which later changed course placing the location on the U.S. side of the border. They, too, invited local native people to join them in a three-day feast. The same happened in Florida when Spaniards landed near St. Augustine in September 1565. Prayers and a feast with the local Indians followed (no mention of turkeys). So Texas and Florida lay claim to the first Thanksgiving — and Catholic ones, at that.

Zoom forward, now, to the Civil War. In 1863, after Union wins at Vicksburg and Gettysburg, Abraham Lincoln proclaimed the last Thursday in November to be a national day of Thanksgiving. And so the feast we know today was born.

Discounts for AARP Members — Save on restaurants, groceries, movies, concerts and more.

So which "first" celebration trumps the others? According to Ann Berry, executive director of the Pilgrim Society and Pilgrim Hall Museum in Plymouth, Mass., the Pilgrims' feast wins. "To us, 400 years later, that's what we as Americans look to as the origin of our Thanksgiving today," she says. But Tammy Radcliff, manager of the Berkeley Plantation, favors Virginia's. "This was the first official Thanksgiving, the documented Thanksgiving," she explains.

As for Texas, Barbara Angus, the senior curator at the El Paso Museum of History, takes a longer view. "It is simply human nature to celebrate after great triumph or trauma," she says, and there was plenty of trauma to go around when North America was first being settled by Europeans. Plus, adds Angus, even among the museum's staff, there is disagreement. "We have a hold-out from Florida who says the first Thanksgiving was over in Florida," she says.

Texas or Florida? Virginia or Massachusetts? Potato, potahto. Mashed white ones and sweet baked ones. Please pass the gravy.

Beth Goulart is a journalist based in Austin, Texas.