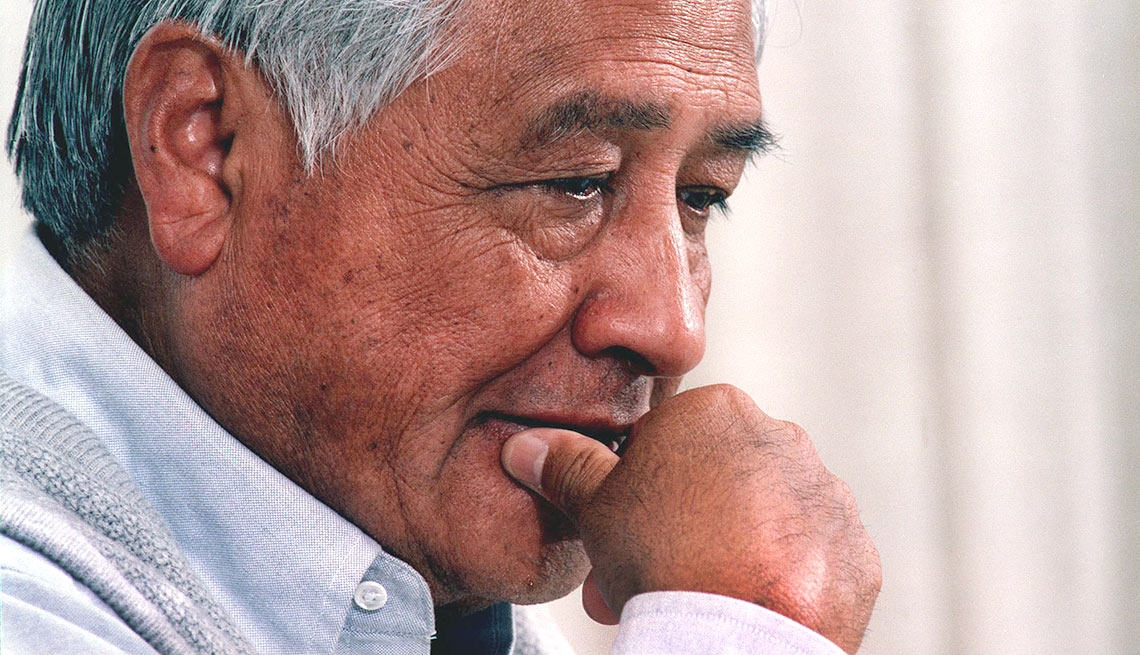 En español | A new documentary and biography are in the works, and there may also be a new movie about César Chávez’s extraordinary life. But it’s his family — he had eight children and 31 grandchildren — who’ve done the most to keep the farmworker champion’s legacy alive.

They remember him as a loving father and grandfather, and an extraordinary role model who pushed them to achieve. They also tell how Chávez, who devoted himself to improving the life of farmworkers, tried to find time to spend with them by bringing family members along on marches and putting even the youngest grandchildren on picket lines and outside supermarkets targeted for protests.

“At the time this was normal to me because I didn’t know anything else,” says granddaughter Julie Chávez Rodríguez, 33. “It wasn’t until later in life that I realized my life was not normal.”

A Mexican American labor leader who used marches, boycotts, and fasts to fight for the rights of migrant farmworkers, César Estrada Chávez, born March 31, 1927, in Yuma, Arizona, became a symbol of righteous activism. He emulated the nonviolent methods of Martin Luther King Jr. and Mahatma Gandhi, and with Dolores Huerta co-founded the United Farm Workers, the nation’s first farmworker union, in 1962.

Like King and Gandhi, César Chávez beat the odds through sheer strength of will. And his magnetism and devotion to the cause impressed Americans of all stripes whose boycotts of grapes and lettuce persuaded growers to sign union contracts that protected farmworkers.

Chávez coined a powerful slogan, “¡Sí se puede!” — “Yes we can!” — decades before Barack Obama used it to help usher him into the White House; and, through life-threatening fasts, brought worldwide attention to the plight of U.S. migrant workers. The labor leader, who died in San Luis, Arizona, on April 23, 1993, would have turned 84 this year.

A Call to Serve
In his honor each spring, around the time of César Chávez’s birthday, Chávez family members fan out to student and community groups to speak about the importance of community service and volunteerism.

Anthony Chávez, 25, was a child when he lost his grandfather. But he is part of the family’s informal speaker bureau. He urges students — and even inmates of California juvenile justice facilities — to volunteer.

“What we do is share this one example of history — my grandfather — to try to move others to make a difference,” says Anthony Chávez.

That is also the focal point of César Chávez Day, observed as a state holiday in 10 U.S. states. To date, efforts to establish a federal holiday have been unsuccessful.

Anthony’s father, Paul Chávez, 53, says it’s natural for family members to try to maintain the legacy. “He always wanted us to do more,” says Paul Chávez. “He had more faith in me than I had in myself. I chalked it up to the love a father has for a son. But later I found out he was this way with everyone. He had tremendous faith ordinary people could do extraordinary things.”

Chávez’s life was shaped by a family misfortune. During the Great Depression his family lost a ranch and a grocery store it owned in Yuma, Arizona, and was forced to move to California to work in the fields. His family suffered hardships, and he dropped out of school in the eighth grade to work full time as a migrant farmworker.

“I’m not very different from anyone else who has ever tried to accomplish something with his life,” said Chávez in a 1984 speech to the Commonwealth Club of California. “My motivation comes from my personal life — from watching what my mother and father went through when I was growing up from what we experienced as migrant farmworkers in California.”

He married Helen Fabela, a farmworker’s daughter. She kept the family together during César’s frequent road trips, picking crops to help support the family and provide her husband with gas money.

The family paid for Chávez’s ambition in other ways, says longtime Chávez press secretary and speechwriter Marc Grossman, who remembers when Chávez’s daughter Eloise got married. César, says Grossman, attended the ceremony at church, stayed for the first dance at the reception, then left to help organize a strike in Salinas, California.

“When he had to make a choice between the family and work, he chose the work,” Grossman says.

“But they all understood that and were proud of him.”

Eloise Chávez Carrillo, 58, says attending the local school was a challenge for the labor leader’s children because the children of growers would taunt them. “We’d come home and say, ‘Can’t you just be a regular father?’” recalls Chávez Carrillo. “And he’d just say, “We’ll pray for those who hurt you.’”

Liz Chávez Villariño’s son Juan, 28, often speaks about his grandfather to students and Latino groups in California. “We were raised in the movement, and I’m happy to carry on his legacy in any way possible,” he says.

Yet there are critics of the family’s efforts.

Miriam Pawel, author of The Union of Their Dreams: Power, Hope and Struggle in Cesar Chavez’s Farm Worker Movement, says the UFW’s clout and membership have plunged. She also criticizes the efforts of the family’s tax-exempt organizations, saying they invoke the harsh lives of migrants to raise money but don’t address farmworker needs.

“Building low-income housing may be helpful to some, but migrants can’t afford it and still live in shacks,” says Pawel. “Baby boomers grew up boycotting grapes, and there are a lot of people who think the boycotts solved everything, but they really didn’t.”

To Pawel, Chávez is a hero, but with shortcomings — including an autocratic nature that hurt the UFW’s ability to grow through coalitions with other labor groups. “I believe it’s important for school kids to learn about César Chávez, but they should learn the whole story,” she says.

She may help with that with a new biography. Grossman is also working on a book about his former boss. And screenwriter Keir Pearson, who cowrote the film Hotel Rwanda, has optioned the screen rights of Chávez’s life from the family foundation to produce a biographical movie. The Sundance Institute is also sponsoring a new documentary called Cesar’s Last Fast.

With the 50-year anniversary of the founding of the UFW around the corner, attention is again being focused on the union, and on the life, work and legacy of César Chávez. Some, like Pawel, question the relevancy or effectiveness of the United Farm Workers — perhaps Chávez’s most visible legacy — whose membership has dwindled from about 70,000 active members in the 1970s to 27,000 today — a drop that’s in sync with the overall decline in union membership in the United States.

But, as Chávez himself said, the UFW was only the beginning; to focus only on the union would be, perhaps, to miss the bigger picture of who he was and what drove him.

According to Paul Chávez, his father was offered opportunities to lead a normal middle-class life and he rejected them. One such opportunity was to stay with the Community Service Organization, a Latino civil rights group in Los Angeles. That job allowed Chávez to wear Brooks Brothers suits and drive a Volvo.

“He came home each night looking like Clark Gable,” Paul Chávez remembers. But his father left that job to organize farmworkers with Dolores Huerta, a move that hurt the family financially.

Another shot at an easy life came when the late Sargent Shriver, founder of the Peace Corps, asked Chávez to run its South American operations. “He asked us if he should take the job,” recalls Paul Chávez. “He told us, ‘We’ll have a nice, big house and maids.’” But then, Paul says, “He said, ‘No, we’ve got to stay here and help poor people. That’s our job.’”

Perhaps more telling is the understanding Chávez himself had of his work, as he summarized in a 1984 speech to the Commonwealth Club:

“From time to time, you will hear our opponents declare that the union is weak, that the union has no support, that the union has not grown fast enough. Our obituary has been written many times. … [But] once social change begins it cannot be reversed. You cannot uneducate the person who has learned to read. You cannot humiliate the person who feels pride. … Regardless of what the future holds for the union, regardless of what the future holds for farm workers, our accomplishments cannot be undone. … The consciousness and pride that were raised by our union are alive and thriving inside millions of young Hispanics who will never work on a farm.”