En español | Deal or no deal, older Americans are in for changes as a tense showdown over the nation's red ink enters its final days.

President Obama and congressional leaders have spent day after day huddled over the gigantic mathematics problem of how to rein in the nation's annual deficit and growing debt. Obama has pushed for a grand plan to cut $4 trillion from the federal budget over the next 10 or 12 years, and congressional leaders have fought with him, and among themselves, over what it should look like. 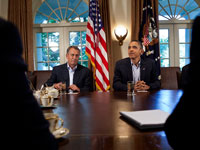 Meanwhile, the clock ticks toward Aug. 2, when the nation's borrowing will bump up against the congressionally imposed debt ceiling. House Republicans say they were sent to Washington with a mandate to shrink a bloated federal government and won't raise the debt limit without major spending cuts. Obama told CBS News that without a debt ceiling increase he can't promise that the federal government will be able to send out Social Security checks on Aug. 3.

Senior groups have chided Obama for the threat. "While there may be disagreement over different policies, there should be no disagreement that it would be both irresponsible and immoral to fail to make Social Security benefit payments to seniors who have worked and contributed over their lives to earn their benefits," said AARP Vice President Nancy LeaMond.

If a large deal is reached, it could cut the Social Security and Medicare programs. If the stalemate continues and the nation can't afford to pay its bills, the default of the federal government could tank stock and bond prices, hurting the portfolios of older people who must live off those assets. And even if Congress concedes and raises the debt ceiling without tackling the larger fiscal problems, those issues will grow in importance.

"Every course of action is going to include significant changes for someone 50 and older in their relationship with the federal government," says Michael Franc, vice president of government studies at the Heritage Foundation. "It's going to be either rewritten by the action of the president and Congress or its inaction."

If no action is taken, Social Security and Medicare will continue on their long-term path to financial stress, Franc points out, as health care costs rise and boomers retire.

The pressing threat of default

But as the tense talks between Obama and congressional leaders convene each afternoon, the more pressing threat of default has taken the spotlight.

The Bipartisan Policy Center released a study recently showing that in August, the federal government expects to take in $56 in revenue for every $100 it owes.

"The bills are coming due. Something won't get paid," says Chad Stone, chief economist for the Center on Budget and Policy Priorities. "We are definitely playing with fire here."

About one-third of Social Security recipients rely on those government checks for all or nearly all their income, says AARP legislative policy director David Certner.

Next: Is there a way around the standoff? >>

Obama's Treasury Department would have to decide who gets paid. Not paying Social Security checks could leave needy older people scraping by and cause a political firestorm. Not paying civil servants and military troops carries its own risks. And not paying bondholders who hold the nation's debt could have far-reaching effects on the economy.

If investors see government bonds as a riskier investment after default, they will demand higher interest rates. That will cost the federal government extra in interest payments and also raise the rates for home buyers and consumers who have credit card payments.

Credit-rating agency Moody's Investors Service said Wednesday that it already is beginning to assess whether to downgrade the country's spotless credit rating for government bonds.

The idea of default has opened a fissure within the Republican Party. Presidential candidate Michele Bachmann of Minnesota said this week that she saw little danger in not raising the debt ceiling and accused the White House of scare tactics.

But White House Press Secretary Jay Carney said Wednesday that "we cannot play a game of chicken with the full faith and credit of the United States government."

Is there a way around the standoff?

Senate Republican Leader Mitch McConnell this week sprang a proposal allowing Obama to raise the debt ceiling until the next election without Congress' explicit approval. That plan, which was gathering support in the Senate from both parties, would prevent default and shift the political risk for raising the debt ceiling to Obama.

Obama has given the negotiations until July 22 to come up with a large deficit deal, though McConnell's plan was a clear indication that many lawmakers don't believe an agreement can be reached.

Republicans have pushed hard for large spending cuts without tax rate increases, and conservatives have kept the pressure on not to budge from that position. Democrats have said they would compromise and cut programs like Social Security and Medicare, but only if more tax revenue is involved, too.

The leading idea for cutting Social Security spending is altering the way cost-of-living increases are figured.

Certner spent Thursday with AARP leaders from all over the country lobbying Congress to leave Social Security and Medicare alone as it solves the deficit problem.

But Stone says there is widespread agreement that the inflation measure the federal government uses to calculate cost-of-living adjustments overstates inflation. The new method, called a “chain-weighted” consumer price index, would factor in that people make different choices when prices go up. The new formula likely also would apply to civil service and military pensions as well as income tax brackets and standard exemptions and deductions, Stone says. That would make the pensions lower and the taxes higher.

The impact of the change would start small. In the first year, the average retiree would get a check that is $43 less each month than it was under the old system. As retirees got older, the accumulated impact could be as much as a check that is 10 percent lower by the time a person reaches his 90s.

Next: What are the options for Medicare? >>

The Medicare program likely would see major changes if a large debt deal is made. Republicans want to give seniors subsidies to buy private insurance, instead of a guaranteed Medicare benefit like the current program. Democrats oppose that idea, but Obama has been open to other cuts to Medicare.

Certner says a raft of premium increases and higher copays are being considered for Medicare. Negotiators also are targeting medigap insurance, which protects retirees from out-of-pocket costs, because critics say it discourages patients from limiting their medical spending.

And some lawmakers have begun talking about raising the eligibility age of Medicare. Stone says that could really hurt near-retirees who have gone for years without health insurance, putting off needed medical care until they turn 65 and qualify for Medicare. "You already have lots of moderate-income seniors under 65 who are struggling and postponing stuff."

Certner says he is concerned about proposals to cut the Medicaid program, which pays for much of the nation's long-term care. He says those programs are important to seniors who need help such as home-based care and community services.

For both Medicare and Medicaid, the larger the ultimate budget deal, the bigger the likely cuts to those programs, Certner says.

But Alan Viard, resident scholar at the American Enterprise Institute, says not reaching a deal could be expensive in the long run. The Social Security program will not be able to pay all its benefits starting in 2036, and Medicare will have a shortfall starting in 2024, under the current program. Economists worry that the nation's debt is becoming too high as a percentage of the economy.

"We have a huge fiscal imbalance over the long term in this country. The sooner we address it the better," Viard says. "Every year we wait, it becomes bigger and more difficult. The tax increases will have to be bigger. The spending cuts will have to be bigger. It will be a shame if we walk away from what may be an opportunity for bipartisan agreement."