En español | As in 2008, security weighs heavily on the minds of older voters. But in this presidential campaign, it's more financial security, less homeland security.

In 2008 and 2012, the AARP Bulletin surveyed voters 50 and older to see which issues might affect their choice for president. 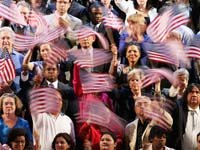 Among those rated "very important," job growth and rising health costs top this year's list, at 83 percent. The same issues came in at 66 percent and 79 percent, respectively, in 2008, when the national unemployment rate was 4.8 percent and the Great Recession loomed on the horizon.

There appears to be less concern about threats from outside U.S. borders.

The issues of terrorism, immigration and America's image abroad fell from 74, 63 and 48 percent in 2008 to 65, 48 and 36 percent. And the war in Iraq? Seventy-nine percent rated it very important in 2008. With American troops out of Iraq, it wasn't offered as an issue this time around.