President Obama called on Congress on Tuesday to work with him to move the nation past the recession and into an era of tackling the deficit and investing in programs that will help the country compete in the world. 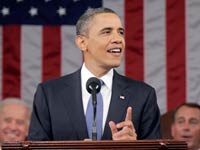 President Barack Obama delivers his State of the Union address on Capitol Hill in Washington, Jan. 25, 2011.

“We are poised for progress,” Obama said during his State of the Union speech. “The steps we’ve taken over the last two years may have broken the back of this recession – but to win the future, we’ll need to take on challenges that have been decades in the making.”

He touched on issues of importance to older Americans, including a defense of his health care reform, a promise to freeze domestic spending, a call for expanded job-training programs, a vow to veto pork projects and the need to tackle a runaway deficit as well as difficult topics such as improving the solvency of Social Security and Medicare.

Acknowledging the reality of a new Republican majority arrayed before him in the House chamber, Obama struck many centrist themes, including praise for U.S. soldiers and a call for a five-year freeze on domestic discretionary spending except for security programs, saving more than $400 billion over 10 years. The cuts, which were not detailed, could affect programs of interest to older Americans.

A. Barry Rand, AARP’s chief executive officer, said he was concerned that deficit cutting could involve entitlement programs – Medicare and Social Security. “While efforts to reduce the deficit are important, we will continue to speak out against any plan offered by the administration or Congress that would target these critical safety nets for changes based on budgetary targets instead of their impact on the lives of everyday Americans,” he said.

Republicans have made it clear that they want the nation to go further in cutting spending, which has contributed to a massive federal debt. Hours before the speech, the House voted to roll back spending to 2008 levels.

Rep. Paul Ryan, R-Wis., chairman of the House Budget Committee, gave the official GOP response to the president’s address. Ryan said the country is at a tipping point and can’t afford the big-government vision of Democrats. “We are at a moment, where if government’s growth is left unchecked and unchallenged, America’s best century will be considered our past century,” Ryan said.

Republicans called for deeper domestic cuts and said their November trouncing of Democrats at the polls was a clear sign the public wants a smaller government.

“You voted out the big-spending politicians,” said Rep. Michele Bachmann, R-Minn., a leader of the conservative Tea Party. “We’re in the very early days of a history-making turn in America.”

Edward F. Coyle, executive director of the Alliance for Retired Americans, said he was alarmed to see Ryan and Bachmann speak for the Republicans because of their hostility to Social Security and Medicare programs.

Obama’s own deficit commission has proposed changes to Social Security (such as raising the retirement age) and Medicare. Obama said Tuesday night that any changes to put Social Security on stronger financial footing shouldn’t put current retirees at risk.

Republicans in the House have voted to repeal Obama's sweeping health care reform, which has been a lightning rod for criticism.

But Obama said the bill is helping people with preexisting conditions and uninsured students find coverage and is making prescription drugs cheaper for seniors. He offered to roll back some bookkeeping provisions that small businesses complain are onerous, and to consider changes to medical malpractice law.

Even as Obama called for a spending freeze, he also vowed to “invest” in education and research so the United States can keep up with international competitors, such as India and China.

“The future is ours to win. But to get there, we can’t just stand still,” he said, comparing the turning point to the space race kicked off by the Soviet launch of the Sputnik satellite in 1957. Obama called for investments in infrastructure, clean-energy technology (using money cut from tax breaks for oil companies), community colleges and research that could open industries that would create jobs.

First lady Michelle Obama invited 55-year-old Kathy Proctor to sit in her box Tuesday night. Proctor, of Winston-Salem, N.C., worked in the furniture industry for 30 years but now is back in school, hoping to become a bio-fuels analyst. Nearly 2.1 million Americans age 55 and older were unemployed in December, according to labor statistics.

Susan MacManus, a political scientist at the University of South Florida in Tampa, said the president’s call to improve the country’s competitiveness will resonate with older Americans. Older workers are particularly concerned about jobs being outsourced to other countries because it is so difficult for those workers to find new work if they are laid off.

But Obama made it clear that he would make his case to the public for some spending increases.

Cutting the deficit by gutting our investments in innovation and education is like lightening an overloaded airplane by removing its engine. It may feel like you’re flying high at first, but it won’t take long before you feel the impact,” Obama said.

But Brian Darling, director of government relations at the conservative Heritage Foundation, said the “investments” are merely a “warmed-over version of a stimulus package.”

“It didn’t work the first time. It’s not going to work this time,” Darling said.

Spurred by calls for bipartisanship in the aftermath of the shooting in Arizona of colleague Rep. Gabrielle Giffords, a Democrat, many lawmakers tried to put aside party rancor for the night. Many crossed the House chamber’s center aisle to sit with members of the opposite party and wore ribbons on their lapels to remember the victims of the Tucson shooting, where a gunman targeted Giffords and bystanders at a constituent meeting.

Obama said it would be more important for lawmakers to work together Wednesday than to sit together Tuesday night, especially with the Senate and the White House in Democratic hands and the House under Republican control.

“New laws will only pass with support from Democrats and Republicans,” Obama said. “We will move forward together, or not at all – for the challenges we face are bigger than party, and bigger than politics.”

Obama cautioned that politicians are likely to argue about every letter of every law.

“We should have no illusions about the work ahead of us. Reforming our schools, changing the way we use energy, reducing our deficit – none of this will be easy. All of it will take time.”

Tamara Lytle is a freelance reporter who has covered Congress, the White House and politics in Washington for more than 20 years.