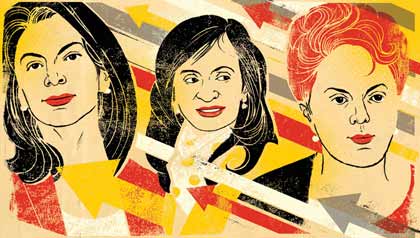 En español | In some ways, the lives of Latin America's female presidents have been more fantastic than the story lines of any telenovela: imprisonment and torture, financial scandal, unwed motherhood. Though they differ in their policies and political philosophies, Dilma Rousseff of Brazil, Cristina Fernández de Kirchner of Argentina and Laura Chinchilla of Costa Rica each plunged into the rough and tumble of Latin American politics at an early age and rose to lead their countries through hard work, grit, intelligence and keen political instinct.

"They are going to have a huge impact in their countries, the hemisphere and the world," says Susan Segal, president and CEO of the Americas Society/Council of the Americas, New York–based groups that specialize in Latin American issues. Segal notes that they've already promoted the cause of democracy by winning fair and transparent elections in nations that have known dictatorships and military coups. They struck a decisive blow against the machismo of Latin American politics, and they lead the fight for gender equality in the Americas where even the United States — which has never elected a woman president — has much more of a glass ceiling. "People [in Latin America] want better lives for their children, so they are picking the most competent candidates," says Segal.

Dilma Rousseff, 63, who was sworn in as Brazil's first woman president on January 1, will lead a country growing in political power and economic strength. The daughter of a Bulgarian immigrant and a Brazilian school teacher, she's been a leftist guerrilla, economist, energy minister and president's chief of staff.

After Brazil's military seized power in 1964, Rousseff went underground to battle the dictatorship. She was arrested, endured 22 days of torture and served a three-year prison sentence.

But when Brazil's generals loosened their grip on the nation in the 1980s, Rousseff helped establish the Democratic Labor Party. After the party started to win elections, she held a number of bureaucratic jobs and in 2001 joined the Workers' Party, led by Luiz Inácio Lula da Silva, whom she helped win the presidency. Rousseff was later appointed Lula's minister of mines and energy, and eventually became the president's chief of staff and handpicked successor.

Lula's popularity and his political track record — he lifted millions of Brazilians out of poverty — helped Rousseff's bid for the presidency, which she launched a year after battling lymphoma. But her own achievements and vision also paved the way to the executive mansion, says Segal.

Her principal goal, Rousseff says, is to fight poverty. As energy secretary, she launched the ambitious Luz para Todos (electricity for all) program aimed at extending electrical power to all Brazilians. One of her pet projects, Minha Casa, Minha Vida (my house, my life), allows poor Brazilians to buy homes. She also wants to extend her nation's network of government-funded health care clinics, with the goal of achieving universal coverage. And using revenue from a new offshore oil find, she wants to repair Brazil's crumbling infrastructure. Preparations for the 2014 World Cup and 2016 Olympics in Rio de Janeiro could spur some of those repairs.

Cristina Fernández de Kirchner, 58, Argentina's president since 2007, has been called "the Hillary Clinton of Latin America."

Kirchner married her law school sweetheart, Néstor Kirchner, and helped him become the governor of a small southern province, and then president.

"But Cristina had an outstanding record of her own," says Franklin Knight, a professor of Latin American studies at The Johns Hopkins University. "Everyone said she was more capable than Néstor."

Cristina Kirchner served in Argentina's legislature from 1997 to 2007. As first lady, she served as her nation's itinerant ambassador, giving fiery populist speeches around the globe. She was so involved in running Argentina that local media said the Kirchners had a "presidential marriage."

The pair inherited a nation plunged into a severe economic crisis, with runs on banks and more than $90 billion in national loan defaults. Néstor Kirchner defied international bankers who wanted to put Argentina on an austerity program. Cristina Kirchner has also been a tough negotiator with those powerful banking interests and is close to settling the debts that made Argentina a fiscal pariah 10 years ago.

She continued her husband's persecution of the military officials who engineered Argentina's Dirty War more than 30 years ago, and she launched a campaign to reunite the orphans of the "disappeared" with their biological grandparents. Progressives hailed her support of a same-sex marriage bill. When she signed it into law, Argentina became the first country in Latin America to recognize same-sex marriage. But unlike her husband, Cristina Kirchner opposes abortion.

Cristina Kirchner has been stung by scandals about the source of some of her campaign cash and wealth. Yet her popularity rating surged after her husband's death last October, and she's the front-runner for the presidential election this October.

Unlike Rousseff and Kirchner, Costa Rican President Laura Chinchilla, elected to office in 2010, is a centrist. She says she prefers conciliation to confrontation, but she's no pushover.

In 1995, as her nation's vice minister of public security — unwed and five months pregnant — she faced down angry union officials to end a crippling strike. She later battled drug cartels, both in the legislature and as one of former President Oscar Arias's two vice presidents.

During her campaign, Chinchilla promised to boost education spending, increase funding for law enforcement and appoint an anti-drug czar to stop drug smugglers from using Costa Rica as a transit route. She faces a possible border war with neighboring Nicaragua over that nation's dredging operation in the San Juan River, which separates the two countries. Chinchilla, 52, is a social conservative who is staunchly opposed to abortion, gay marriage and the separation of church and state. She alienated some women's groups by refusing to press for women's rights, but nevertheless won the support of most female voters.

Chinchilla's ambassador to the United States, Muni Figueres, says Chinchilla was elected by women voters and mainstreamers from all sectors of society.

"She was subtle, not confrontational about the issue [of feminism]," says Figueres, who is the daughter of former Costa Rican President José Figueres. "She would say, 'The fact that I'm here running is the message.'"

The elections of Rousseff, Kirchner and Chinchilla prompted some to call this the "Era of La Presidenta." In the past, says Figueres, who made her own unsuccessful vice presidential bid in 1990, "there was no space for women in politics. Now women candidates are welcomed, even by men." Equally important, she says, "Women are not being intimidated by the power structure anymore. In all walks of life, women are less fearful of competition and of exercising power."

Next: Making strides across the region. >>

In 1990, less than 5 percent of Latin America’s lawmakers were women. That figure nearly tripled by 2003, according to the Inter-American Development Bank. The numbers of Latinas are also increasing in presidential cabinets, where women occupy 17 percent of ministerial positions, according to the Americas Society. In addition to the three current presidents, a female candidate, Keiko Fujimori, narrowly lost a runoff election for president of Peru in 2011, and a woman may run for president in Mexico in 2012.

Experts say the rise in female lawmakers was fueled by the adoption of quota laws in 12 Latin American countries — including Argentina, Costa Rica, Brazil, Uruguay and the Dominican Republic — that require political parties to field a certain number of female candidates.

Latin America’s women are also becoming better educated and entering the workforce in greater numbers, creating a growing pool of qualified political candidates, says Vivian Roza, coordinator of the Program for the Support of Women’s Leadership and Representation at the Inter-American Development Bank.