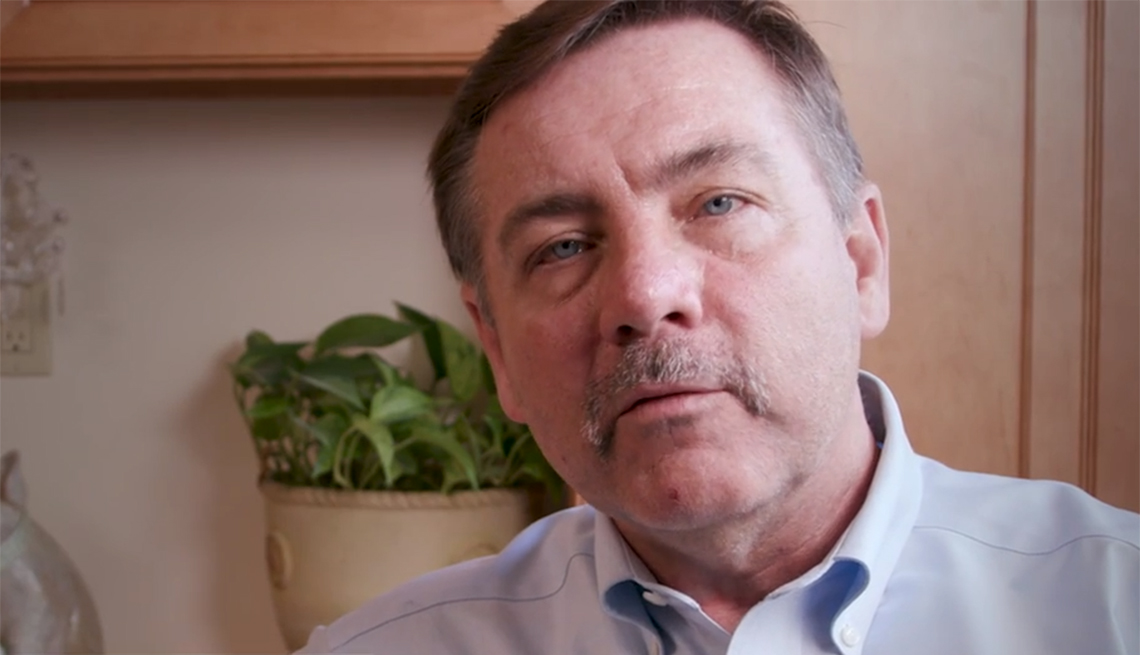 En español | Larry Zarzecki traces his decision to fight for lower prescription drug prices to the time he was in line at the pharmacy a few years ago just before Christmas. The retired Maryland law enforcement officer watched as an elderly woman realized she didn’t have enough money to pay for the prescriptions her doctor had ordered.

“The lady reminded me of my grandmother,” says Larry, 57, who was forced to retire from law enforcement 10 years ago when tremors in his right hand led to a diagnosis of Parkinson’s. The woman, Larry says, “put her cat food up on the counter, some trail mix and Cheez-It crackers.” When she unpinned her small change purse from inside her blouse and took out her money, she realized she didn’t have nearly enough money to pay the $485 prescription drug bill.”

As the woman was trying to decide which medication she could do without — after putting back everything else except her cat’s food — Larry reached over and gave the pharmacist his credit card to pay for the medicine. Pretty soon others in line chipped in for her other groceries and gave her some spending money.

“Everybody in line was balling like babies,” Larry recalls. “They say everybody has more than one chapter in his life. I have found my second passion — advocating and lobbying for the rights of people who are having trouble paying for their medication.” Larry worked on the fight to get a pharmacy gag rule lifted in Maryland, thereby giving druggists the right to inform customers about how to get the best price for prescriptions. In 2018, Congress banned such pharmacy gag rules nationwide. Larry also wants to know why Medicare isn’t allowed to directly negotiate prices with drug companies.

As a retired police officer, Larry has health insurance through the state of Maryland. But that hasn’t shielded him from high prescription bills and problems getting the medicine he needs. He takes eight medications each day but his insurance doesn’t fully cover two of them. So, he pays $3,200 a month. “It would be $8,000 a month without my insurance,” Larry says.

He pays for his meds with “credit cards and juggling Peter to pay Paul,” Larry says, adding that he’s just started to tap his IRA to help pay the drug bills. In truth, Larry could apply for Social Security Disability Insurance (SSDI) that would qualify him for Medicare. But he has decided not to apply for that benefit.

“I refuse to be on any kind of SSDI as long as I can function,” he says. “I don’t want to be a burden. Too many people need it more than I do, people who have worse challenges than I do.”

Larry’s doctors want him to take another medicine that would help him with balance problems Parkinson’s causes. But his insurer is still reviewing his request for that medication. That’s where Mia comes in. Mia is Larry’s service dog, and he relies on her to help him stand up. When he has a “freezing” episode, a common occurrence with Parkinson’s patients in which they have a temporary inability to move, Mia tugs on her leash and gets him moving again. “She’s absolutely my partner,” Larry says.

If he could be in a room with the head of a major pharmaceutical company Larry would say: “I’m the first person to say thank you to the pharmaceutical industry for my medication. But we’re being killed by the pricing.” He has a suggestion: “Let’s reduce your advertising budget and just lower the price of your prescriptions across the board to make it more affordable.”