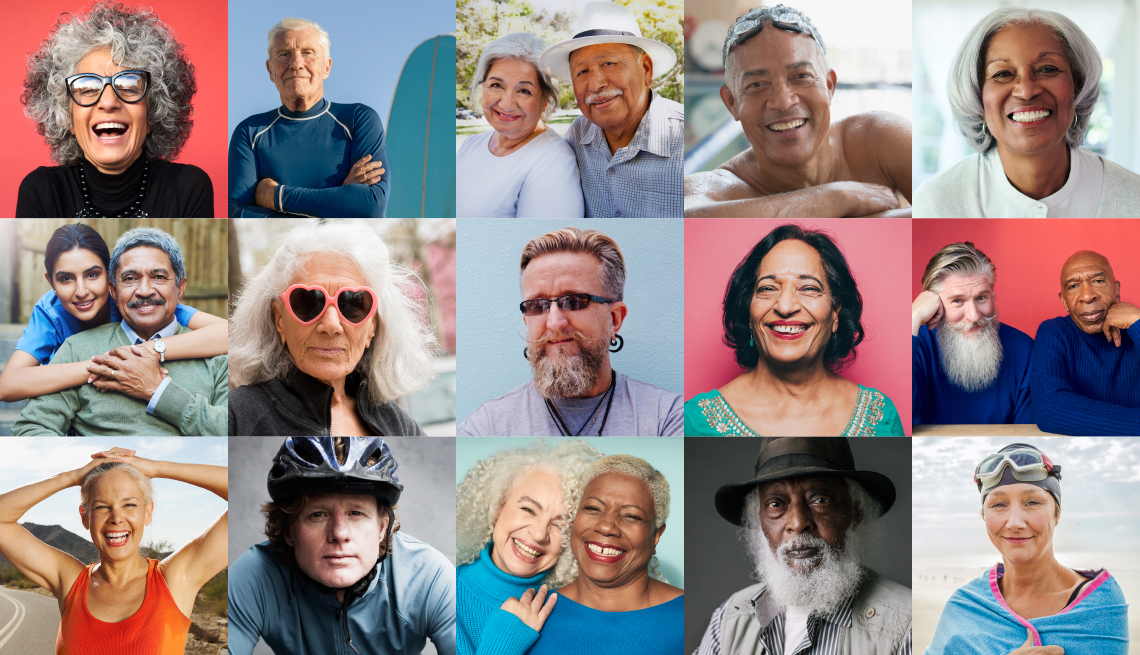 En español | To fight ageism and illustrate the active lifestyles of adults age 50-plus, AARP has joined with Getty Images in launching a collection of more than 1,400 stock photos available for a fee to media outlets, ad agencies and other firms.

The Disrupt Aging Collection features photos of older Americans as vibrant and engaged, some of whom are singing, skiing, swimming in the sea, traveling abroad, playing team sports and hoisting adult beverages with their friends at the beach.

The collaboration came about because new research by AARP finds adults 50 and older are often missing in action in online media images. And when older folks are featured in online photos, they are more apt to be cast in a negative light than people 49 or younger.

The photo collection was launched at Advertising Week in New York City, which runs through Thursday. The conference is expected to draw 98,000 people who work in marketing, advertising, media, technology and design.

Reflecting the reality of aging

"This stereotype-shattering collection reflects the reality of what aging looks like today. The collection shows the 50-plus in the workplace, traveling, entertaining and living active, healthy lives,” says AARP's Martha Boudreau, an executive vice president and its chief communications and marketing officer.

Today nearly 110 million Americans are 50-plus. They generate $7.6 trillion in economic activity annually, and by 2032, the demographic group is expected to drive more than half the U.S. gross domestic product, AARP says.

"It's definitely time for the creative industries to update their mind-set about the 50-plus demographic,” Boudreau adds. “This age group drives our economy and makes new demands on product development and marketing in virtually every industry sector."

Getty Images, a global firm based in Seattle, licenses photos through its web sites, gettyimages.com and istock.com.

"We understand that visuals can significantly impact how people think and act, as well as whether potential consumers develop emotional connections with brands,” says Rebecca Swift, Getty Images’ global head of creative insights.

Armed with AARP's insights, she says the firm has developed guidelines for its contributing photographers. The guidelines emphasize the need for imagery highlighting positive themes such as independence, dignity, empowerment, multigenerational relationships and connectivity, Swift says.

According to new research by AARP, adults 50-plus are under-represented in online media images, and when older Americans are shown, they often appear with gray hair and rarely are shown using tech devices.

Such depictions distort the reality of what older Americans look like and how they live, the study, titled “Media Image Landscape: Age Representation in Online Images,” says.

Among the study's key findings:

The study examined a random sample of 1,116 images downloaded from professional and semiprofessional domains and social distributions for brands and thought leaders, defined as having at least 1 million followers. The media sources consisted of digital and social content on news sites, blogs, Facebook, Instagram and Twitter.

When it comes to hair color, data shows 31 percent of adults 50 and up have colored their hair in the past six months. That suggests adults with gray or salt-and-pepper hair are over-represented in online images.

When it comes to technology, other research shows that adults 50-plus will spend upward of $84 billion on tech products by 2030. But just 5 percent of the images showed this demographic group using a tech product — and when they are featured with a tech device, it typically shows a younger person teaching an elder how to use it.

The study also found people who are 50-plus are presented in online imagery as dependent and disconnected from society at large. Seven in 10 images show them alone, with only a partner, or with a medical professional.