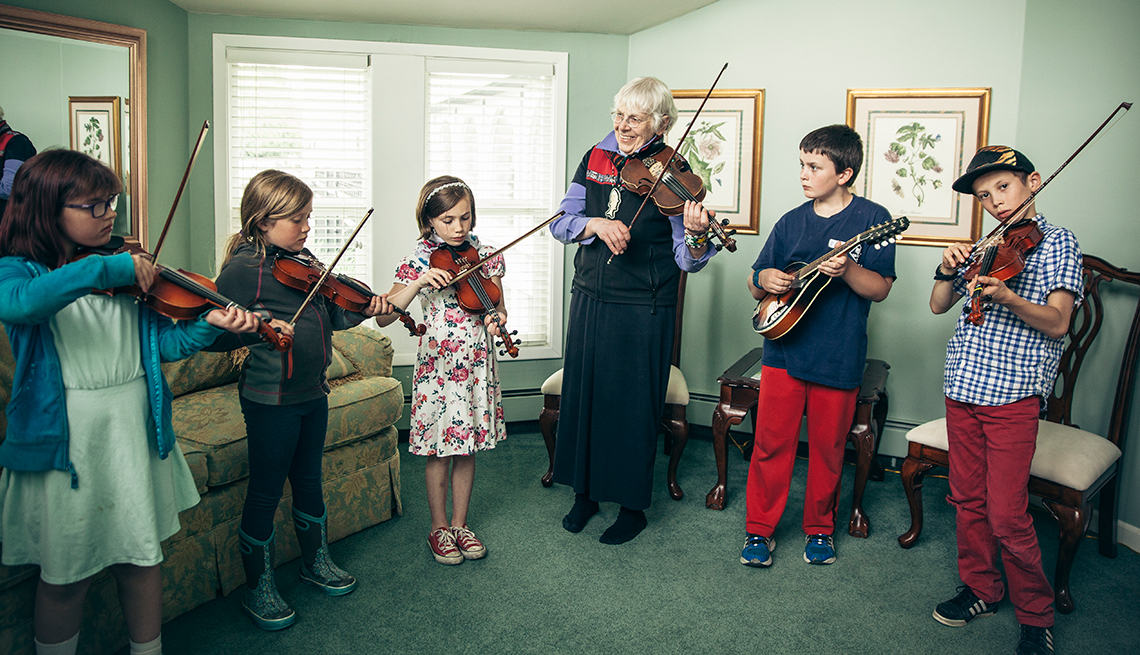 The Rev. Belle Mickelson, 68, with student musicians in Cordova, Alaska.

"As we get older," Marc Freedman said, "we want to be part of something larger than ourselves."

To harness this yearning, he and hundreds of fellow boomers gathered earlier this year in a San Francisco convention hotel a few miles from the Haight-Ashbury neighborhood, where the Summer of Love helped ignite the '60s counterculture half a century ago. They were plotting a different social revolution for a different time.

When they were young, boomers defied their elders on everything from civil rights, gender equality, gay liberation and Vietnam to sex, drugs and rock 'n' roll. Now, as they become elders themselves, some are feeling tugged again toward activism.

Freedman's national nonprofit group, Encore.org, which held the conference, promotes "second acts for the greater good." Next month it will launch Generation to Generation, a program that wants to mobilize a tsunami of older Americans to work in youth-serving organizations as volunteers, part-time staffers or stipend recipients.

Freedman and others believe that the demographic moment is ripe for such intergenerational activism. As any self-respecting boomer will tell you, there's never before been so many older adults with so much gas left in their tanks. At the same time, a growing number of children and youth are living in poverty. Rates of childhood poverty in the United States now exceed rates of elder poverty by a sizable margin and are among the highest of any of the world's economically advanced nations.

Cross-generational volunteering is not a new concept. It draws its inspiration from the late John W. Gardner, a civic activist who exhorted fellow citizens to find "breathtaking opportunities disguised as insoluble problems." Two decades ago, in his early 80s, he and Freedman helped launch what is now AARP Experience Corps, a program that engages older adults as tutors for at-risk public school students. Today it is just one among scores of intergenerational initiatives across the country.

An organization with a similar mission, Jumpstart for Children, started in 1993 as a program that paid college students a small stipend to work as teacher's aides in preschools in disadvantaged communities. But in recent years it has been recruiting older adults. "Because they're more mature, they know how to foster a confidence in the children and a feeling of being cared for," said Ray Ramirez, director of early-childhood education at Proyecto Pastoral, which uses Jumpstart volunteers in its Los Angeles preschool programs.

The granddaddy of such initiatives, Foster Grandparents, was created a half century ago as part of the U.S. government's Senior Corps program. Research has shown that its benefits flow not just to at-risk children but to the older volunteers who work with them in schools, hospitals, juvenile correction facilities and day care centers.

"When you see kids running to greet their older volunteers, and when you see the faces of the older adults light up, you understand how much the generations can do for each other," said Lester Strong, a former AARP Foundation vice president and CEO of Experience Corps, who attended the Encore conference.

Of course, programs like these cannot by themselves solve the next generation's upward-mobility challenges. "The scale is too vast, but we are at a promising demographic moment if we can marry the energy of older adults with the energy of the young," said Donna Butts, executive director of Generations United, who accepted an award at the Encore conference for her nonprofit's work. 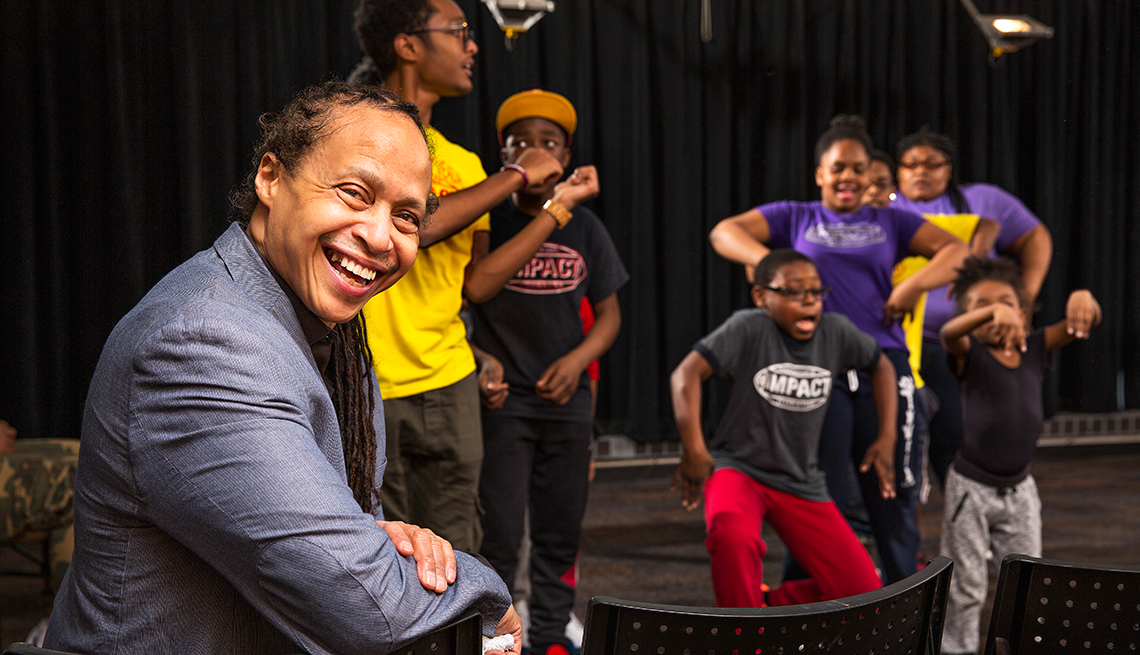 Jamal Joseph, 63, during a rehearsal this summer with performers from the IMPACT Repertory Theatre in Harlem.

The Power of Community

At the San Francisco conference, more than 400 activists shared tradecraft about how to build programs like these into a coordinated nationwide movement. Most attendees were boomers, and they came with their generational élan at full throttle.

Robert Egger, founder of LA Kitchen (and before that, DC Central Kitchen), which provides food-service training to young adults aging out of foster care and older men and women coming out of prison, spoke about what happens when young and old who have been through hard times help one another find a path forward. "A great nonprofit doesn't fix problems; it reveals the power of a community to solve them," he said.

The Rev. Belle Mickelson, who founded a traveling music program for children in remote Alaskan villages, and Jamal Joseph, who created a theater program for youth in Harlem, were among the half dozen recipients of Encore's annual Purpose Prize, given to older adults who find innovative ways to serve the public good. (Starting this year, AARP will administer the prize.) More than a few conference-goers had lumps in their throats as Joseph, a former Black Panther who did two stints in prison, described the journey from "pain to power" that led him to found IMPACT Repertory Theatre, which teaches leadership skills as well as creative arts.

Veterans of intergenerational volunteer efforts cautioned, however, that the movement faces some uphill battles. John Gomperts, head of America's Promise Alliance, another nonprofit that promotes civic activism on behalf of youth, asked during one of the workshops: "If these programs are such an awesome idea — and they are — how come we don't have even more of them?"

One obstacle is the ageist stereotype that older adults have little to contribute. In her address to the conference, AARP CEO Jo Ann Jenkins called on the 10,000 boomers who will turn 65 every day between now and 2030 to demonstrate with their social activism that "aging isn't a problem, any more than living is."

Other conference-goers noted that there can be institutional hurdles to overcome. Not all youth-serving organizations have easy on-ramps for volunteers. Some will have to institute costly background checks. Others may be wary of allowing volunteers to parachute into lives of vulnerable children, many of whom already experience a lot of churn at home and in school.

Then there's the matter of volunteerism trends. The national rate has been ticking down for a decade, from a modern high of 28.8 percent of all adults in 2005 to 24.9 percent in 2015, according to Bureau of Labor Statistics data. The falloff has occurred among all age groups. A 2014 AARP survey found a similar trend, which it attributed to a drop in affiliation with religious and service organizations, traditional mainstays of do-gooder activity.

Along with a decline in volunteering, there's been a scaleback in public investments that favor the young. An ancient proverb says a society becomes great when old men plant trees whose shade they know they will never sit in. For most of our history, America has been a nation of planters. Lately, not so much. Public investments that promote economic opportunity for future generations — in education, infrastructure, basic research — have been declining as a share of the federal budget. 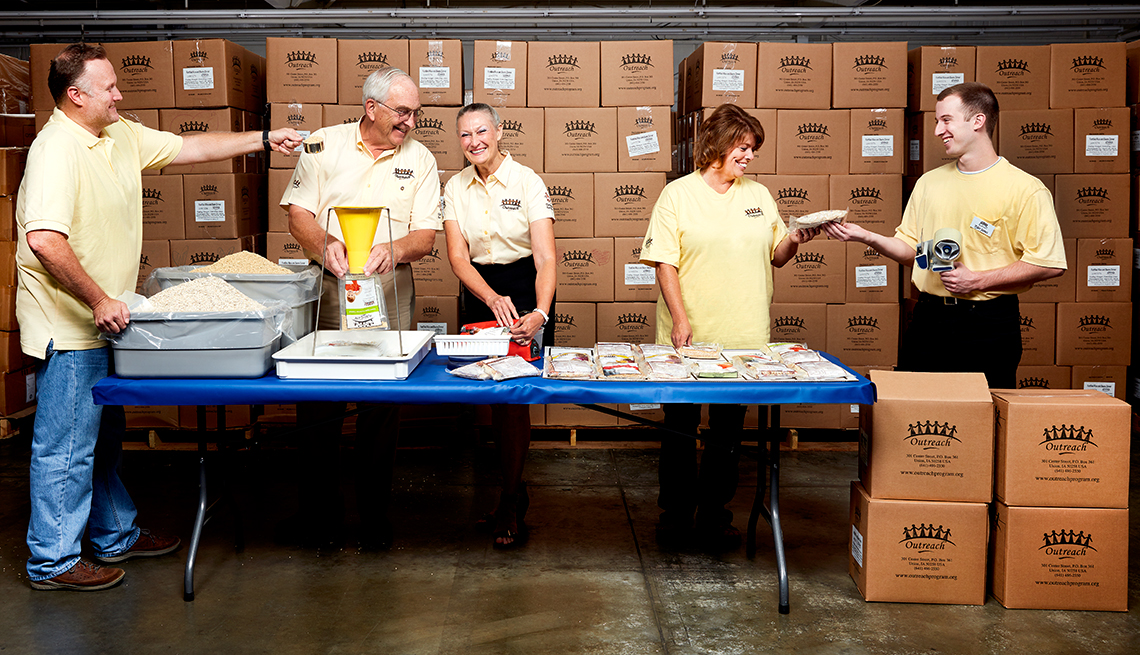 An Antidote to Divisiveness

Perhaps the most daunting hurdle, and a reason that intergenerational harmony is more critical than ever, is what some have dubbed the "gray-brown divide." "Our older population is mostly white, and our younger population has become increasingly nonwhite, and they don't often have a lot of interaction with each other," said Butts.

The generational divide has a political dimension, too. Older adults are now the most conservative age cohort in the electorate; younger adults, the most liberal. These fissures raise a difficult question: Will the human instinct to give something back in later life still kick in when young and old don't look, think or vote alike? The rapidly diversifying America of the early 21st century is conducting that social experiment right now.

On the positive side, the public isn't spoiling for a generation war. Back in the '60s, the young had a finger of protest — often the middle one — thrust in the faces of the old. By contrast, today's young put their elders on a pedestal. According to a new nationwide survey conducted for Encore.org, 9 in 10 adults between the ages of 18 and 35 say that older Americans are superior to the young in their moral values, their work ethic and the respect they show for others.

The public is also optimistic about intergenerational relations. In the survey, two-thirds said that as long as Americans remember that we all have obligations to one another and to future generations, the growing diversity of the population will be a source of national strength.

The activists who gathered in San Francisco hope these good vibrations can catapult intergenerational social activism into a robust national movement — one child, one adult and one community at a time. They see it as an antidote to the divisiveness of modern politics and an affirmation of what's best about traditional American values. And they believe it can satisfy the thirst for a purposeful life that typically intensifies with age.

Doris Williams, 68, could not agree more. For the past three years, she has received a stipend of $2.65 per hour to work as a teacher's aide at Jumpstart programs in South Los Angeles. "You are giving them something for a lifetime," she said, "planting a seed that can go on forever. And they are giving you a reason to get up and go in the morning."