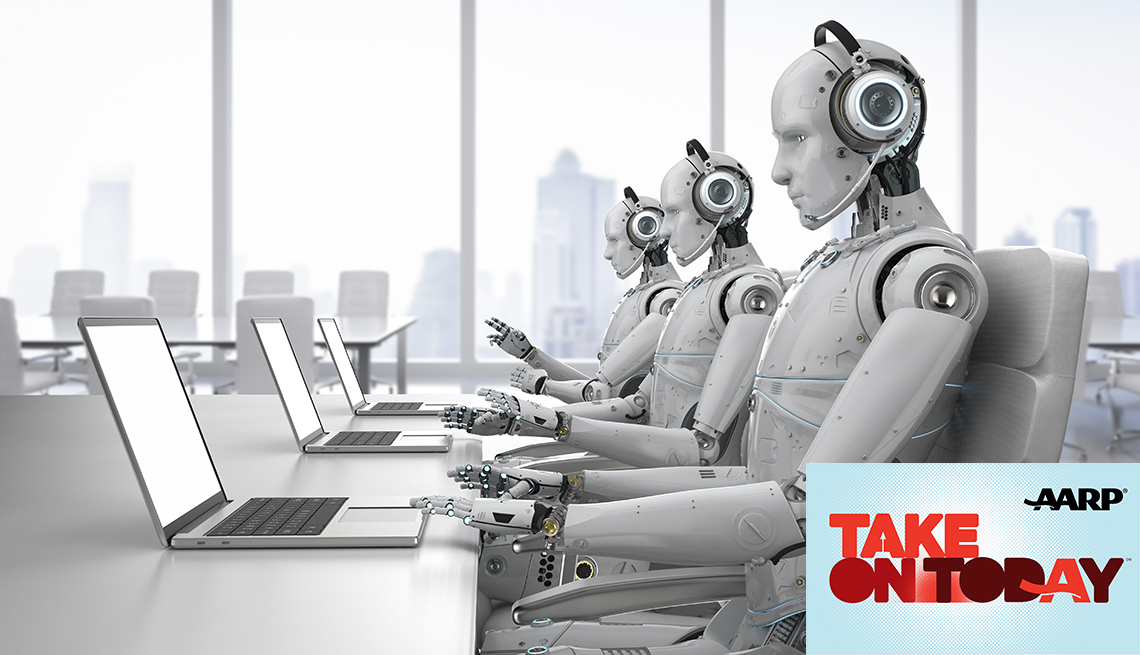 Robocalls have become an epidemic of sorts. Last year an estimated 48 billion robocalls came into the United States, and according to a recent AARP survey, nearly half of US adults said they receive seven or more robocalls per week. Robocall technology has made mass communication more efficient for legitimate purposes, but the technology has also made it easier and cheaper for con artists to reach millions with their fraud schemes.

Kathy Stokes, from the AARP Fraud Watch Network, breaks down the difference between legitimate robocalls and attempts at outright theft.

Kathy Stokes: Robotechnology itself is perfectly legal and it's used for legitimate reasons. If you have a kid in school you're going to get a call on the phone that says the school has been closed or delayed for weather, that's a robocall. If the airline calls you because your flight has been delayed, again, it's a robocall. Entirely legitimate use of the technology.

The problem is that scammers are using it for illegitimate purposes, and they're calling thousands of people at a time with a pre-recorded messages, trying to get them to take an action that will end up having them give over their personal information, or even their money.

Bob Edwards: Scammers often use caller ID, spoofing to mask their true location, making it appear that they're calling from a legitimate or local number to raise the odds that you'll pick up. The goal of scammers using this tactic is to present a phone number that is trusted, so recipients answer the phone. Research shows it works.

Kathy Stokes: I was kind of surprised that people tend to get that the caller ID information that pops up on your phone isn't necessarily who's really calling. That's something called spoofing. But we're still picking up the phone call if the call looks kind of familiar to us. 59% of us are going to pick up the phone if it's from our area code. I think it's 44% will pick it up if it's an area code from where family or friends live. A third of us are going to pick it up if it's the area code plus the prefix of our own phone, we're going to pick that number up. Scammers know that, so they use the spoofing technology to fake the number so we're more inclined to pick it up.

Bob Edwards: Don't expect robocall scams to go away anytime soon, because scammers are raking in big bucks. The Federal Trade Commission says telephone scams cost US consumers $429 million last year. However, there are some warning signs that will help you be on guard for automated scams.

Kathy Stokes: Typically it's going to be a scammer if they use tactics of fear and intimidation. They may use tactics to try to get you to pick up because you've just won the lottery, but frankly, we learned in our own research, that it's much more successful if you scare somebody. So, example, "We're calling from the Social Security Administration, your Social Security account has been compromised and your benefits are being cut off. You need to call right away." That's one of them. Another one, "This is the Internal Revenue Service, you owe back taxes. Pay immediately or face immediate arrest."

Bob Edwards: But with a little work on your part, there are things you can do to turn that flood of unsolicited calls seeking to rip you off into a trickle.

Kathy Stokes: Another surprising finding to me is that only about half of the people in our survey, and it's nationally representative, so half the people in this country have not put their phone numbers on the national do not call registry. I think a lot of people know what it is, or they've heard about it before, but they think, "Oh, nothing's going to work," well, it actually does. You go to donotcall.gov, you put your landline in there, you put your mobile phone in there, and that tells legal telemarketers that they cannot call you. You'll stop getting calls where you haven't already expressly said that it's okay for somebody to call you. If it cuts down on the call volume generally, then the calls that are coming through are more likely to be identifiable as scams. So get your numbers on the do not call registry.

Bob Edwards: The Fraud Watch Network also recommends exploring free or low-cost call blocking apps, and urges consumers to report all scam calls to the proper authorities. For a complete list of do's and don'ts regarding illegal and scam robocalls, visit aarp.org/fraudwatchnetwork. And don't wait to add your number to the national do not call registry. Adding your number will not put a stop to fraudulent calls, but it will make them easier to recognize, since most legitimate telemarketers do not call numbers on the registry. You can take this quick step at donotcall.gov.

Hearing loss affects about a quarter of Americans age 55 to 64, and a third of those 60 to 74. Yet, 80% of people who would benefit from a hearing aid, don't use one. Cost, vanity, denial, inadequate technology, wishful thinking that hearing loss can someday be reversed maybe some of the reasons why.

Well, that wishful thinking just might pay off. Researchers at St. Jude Children's Research Hospital announced that they regenerated auditory hair cells in mice by manipulating certain genes, and now a five-year clinical trial is underway to regenerate hair cells. At Indiana University, researchers have grown inner ear tissues from stem cells, and a 2017 paper published in Nature showed that genetic editing could prevent progressive hearing loss in mice. Similar procedures may one day be used for people.

While promising the notion of a permanent auditory fix is still years away, but technology advances are making hearing aids more versatile, adaptable, and affordable, so don't discount them just yet. But that sound you hear, that's progress. Visit the AARP Hearing Center for more resources and information about how hearing aids can improve your life, at aarp.org/hearing.

Foot pain is not a normal part of aging, podiatrists say, and yet about a quarter of people over 45 suffer from it. Other than injury, weight gain, a sedentary lifestyle, or poor blood flow are common culprits for foot pain. And yes, it can even be something as simple as wearing ill fitting shoes, which up to three-quarters of the population is prone to do. While generally not life-threatening, foot pain often is the triggering event that leads to other more serious problems, like knee, hip and back pain, and ultimately to falls, loss of mobility, or worse.

Baseball slugger Joe DiMaggio found out the hard way that a troublesome heel spur and a failed injury wouldn't just end his iconic career, it would leave him almost immobile well into his retirement. And yet, while most foot problems can be solved with non-surgical solutions, some of the other maladies mentioned can't be. So, just as you'd go to the dentist for a toothache, it's just and important to see a podiatrist if you're suffering foot pain. Taking that step could make all the difference.

You're either one of those people, or you're not. I'm talking about talkers, who know just what to say to score a great bargain. Everybody loves a discount, but not everyone likes to haggle. So how do you overcome the, what is it? Fear, shame, reluctance, to get the price you really want to pay for something? Expert hagglers all agree it starts with starting a conversation. Whether you're at a local yard sale or a car dealership, the rapport you establish with the seller can be an instant barrier breaker to successful negotiating. But for someone who's reluctant, even that can be an uncomfortable place to be.

But here's an idea for those who shy away from face-to-face bargain shopping; go online. If the website you're on offers a live chat feature, establish a connection with your customer service rep, and then ask if the price is negotiable, or if they at least price match. Believe it or not, the rep might offer you a discount just for asking. Or, if you're more of a phone person, call the site's toll-free number. And don't give up. If the first phone rep says no, call back. Maybe the next one will say yes. Remember, you have nothing to lose, and a nice discount to gain.

For more, visit aarp.org/podcast. Become a subscriber, and be sure to rate our podcast on Apple Podcast, Google Play, Stitcher, and other podcast apps. Thanks for listening, I'm Bob Edwards.

An estimated 48 billion robocalls came into the United States last year, and according to a recent AARP survey, nearly half of U.S. adults receive seven or more robocalls per week. Tune in to hear how to fight back against the flood of annoying robocalls. Visit aarp.org/fraudwatchnetwork for more information on protecting yourself from scams.

How to Listen and Subscribe to 'Take on Today' Podcast