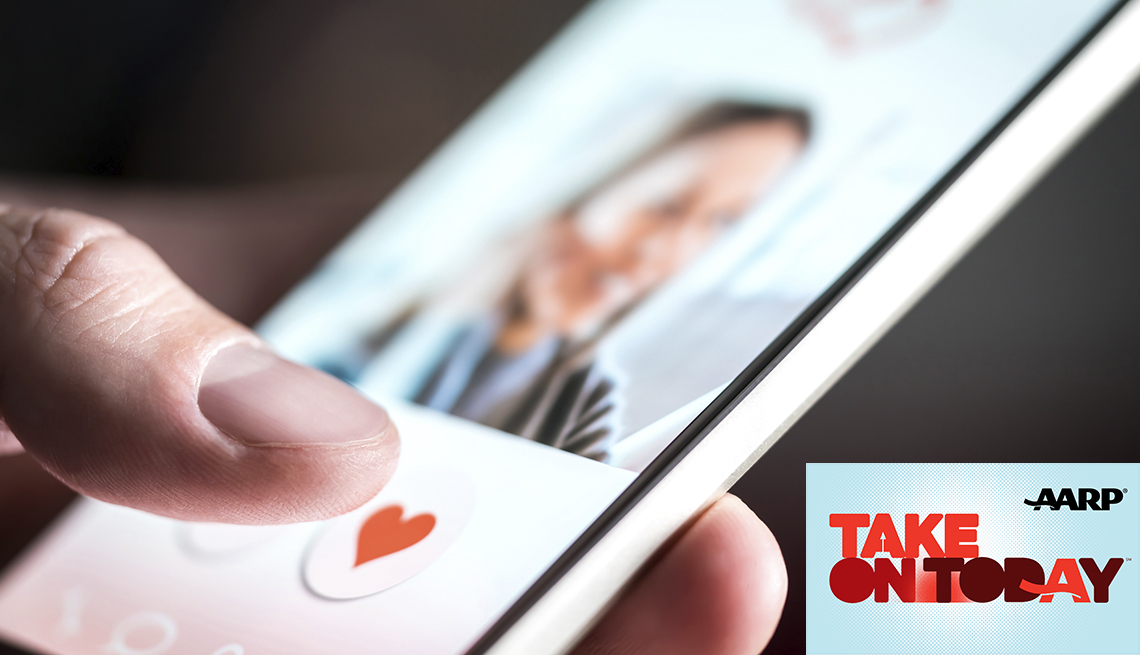 Consider this, Match.com, one of the most popular dating sites, says people age 50 and older represent its fastest growing share of users. They're often the most vulnerable.

In today's dating world millions of Americans are using match making websites, mobile apps, and social networking sites in hope of finding love or companionship. However, scammers are quite adept at building online relationships, pulling on heart strings, and patiently developing a bond of trust that's ultimately costly both emotionally and financially.

So, while there can be a major downside to discovering romantic bliss online, plenty of people do find that special someone. The trick is to be smart, vigilant, and wary. And remember if an online acquaintance you've never met in person asks you for money it's probably a scam, not a match made in heaven. Kathy Stokes from the AARP Fraud Watch Network is with us to today to share how you can protect yourself from these scammers. Welcome.

Bob Edwards: AARP has a new survey on online relationship scams. What did the survey find?

Kathy Stokes: Well we did find what you were just saying, that U.S. adults are forging new relationships online, both friendships and romantic ones. The survey found that almost a third of adults say they have developed a relationship with someone that first started online. We also know that scammers go where there's opportunity, and so they are following us online to meet us and look for ways to target us and take our money.

Bob Edwards: So how widespread is this problem?

Kathy Stokes: Well, we know what you said with according to the FBI the big jump from 2012-2016, and that only tells part of the story because many people never even report this. So that $220 million figure is probably pretty low in terms of what's actually happening out there. In our survey we found that 27% of U.S. adults say they or someone they know have been the target or victim of an online relationship scam, and more than half of the victims say they suffered financial losses.

Bob Edwards: How do the scammers operate?

Kathy Stokes: They set up fake profiles on dating sites and dating apps. They also message targets on social media or even through e-mail. They either make up fake names and bios or they assume the identity of a real person. Targets and victims aren't even necessarily out there on a dating site or a dating app. They're just out on social media or they get an e-mail from somebody and it just sort of arises, and they just sort of fall into a relationship that they didn't even expect.

Bob Edwards: I can just imagine the photos.

Kathy Stokes: Well you know one of the most common uses, from what we can gather, is military personnel photos. People just assume that that's who that person is and that they're safe to talk to.

Kathy Stokes: Yeah, there are. It's definitely a red flag if the person wants to leave the site that you're on and go to e-mail or instant messaging, if they profess love too quickly, if they claim to be that they're from the United States but they're traveling abroad or they're on military deployment, if they plan to visit but then they cancel at the last minute because something unforeseen has come up, and then the big one: They ask for money. This doesn't necessarily happen in days or weeks. These cons can go on for months. They build that trust and then the money starts leaking out.

Bob Edwards: How can people protect themselves?

Kathy Stokes: When you're engaging in an online relationships there are some steps to take to make sure that the person that you're talking to really checks out. One that's my favorite is that Google has this tool, it's at images.google.com. You can take the photo of the person that you're talking to that's on their online profile and actually load it into there and see if it shows up anywhere else under somebody else's name. Then you definitely know that that person is a scammer. You also want to be wary of flirtatious or overly complimentary e-mails. You can actually copy and paste the content of a message and put it in a browser and see if it shows up somewhere else because there are some websites out there that are devoted to just shining a light on these scams, so you might see that that's being used all over the place to target people. And take it slowly. Ask more questions than you answer. Listen for things that might suggest ... inconsistencies that maybe this person isn't being on the up and up.

Bob Edwards: There's got to be some great lines in there like plays for sympathy, that sort of thing.

Kathy Stokes: Oh, definitely. We had an experience where a woman fell into a relationship with someone over many, many months. She actually offered to help him when he was in a situation and he declined. Then some months later, tells a big sob story about how this deal in Norway that he's working on is going south and starts asking for help. Over eight payments she makes to him by wire transfer, each one was at $50,000 ... and you know, she was waiting for him to show up on Christmas and he never did. That's when she figured out that it was a scam.

Bob Edwards: "If I could just get this operation."

Bob Edwards: What makes someone more vulnerable to these types of scams?

Kathy Stokes: We know from this from our own survey, but also what we've learned when we look at other scams and fraud, is that if you have a negative experience in your life, the loss of a loved one, a job loss, or a financial setback, or if you have feelings of loneliness or social isolation, it tends to make you more vulnerable to these scammers.

Bob Edwards: You mentioned some of the stories that people use. Are there others that people could learn from?

Kathy Stokes: Yeah. So AARP operates a Fraud Watch Network helpline. So we have staff and trained counselors that available to anybody, not just AARP members, if they want to find out if something that they think might be legitimate is actually a scam, or if they've fallen victim, they can find help and get support. We learned just very recently that a daughter of a mom who was online dating, she was single, met someone and fell in love with him, and he asked for a loan of $10,000. She gave him the loan. He promised to pay it back. And sure enough, he sent a check for $10,000. She waited on it for a little bit, and then when she deposited it, it bounced. When the daughter called she thought that maybe her mom was starting to suspect something, but she still wasn't admitting that it was a scam.

Bob Edwards: Thank you so much.

For more resources and tips to protect you and your family from online relationship scams, visit AARP.org/fraudwatchnetwork. You can also call the AARP Fraud Watch Network helpline that Kathy discussed at 1-877-908-3360.

If your take on booking vacation rentals from websites and apps feels suspiciously like looking for love on an internet dating site, you're not alone. To be sure there is definitely some trepidation involved and a whole lot of trust.

Are the photos accurate? Do the descriptions tell the full story? Is there open and honest communication?

But for travelers who enjoy weaving themselves into the fabric of a neighborhood or don't enjoy the cookie cutter approach of many hotel chains, home vacation rentals are an ideal option. Like anything else you purchase, buyer beware. And be smart. Read the fine print. Rather than trust the owner's description, use Google Maps to see the actual location of the home. Read the reviews from past tenants. And ask questions. If an owner is evasive or simply won't respond, consider it a red flag and move on. And remember, no matter the price, never send payment directly to an owner especially if you are booking through a reputable site or app. They are the intermediaries for a reason, to keep you safe. You can find more information whether it be vacation ideas, tips on being safe, and planning on a budget as well as member benefits at AARP.org/travel.

AARP The Magazine held its 18th Annual Movies for Grownups Awards in Beverly Hills. The awards celebrate 2018's standout films with unique appeal to movie lovers with a grown up state of mind. They also recognize the inspiring artists who make them.

Tune in to watch the Movies for Grownups Awards on Friday, February 15th at 9:00 PM Eastern on PBS. You can also watch online the following day at PBS.org/moviesforgrownups and PBS apps.

For more, visit AARP.org/podcast. Become a subscriber, and be sure to rate our podcast on Apple Podcast, Google Play, Stitcher, and other Podcast apps.

Thanks for listening. I'm Bob Edwards.

Millions of Americans see online dating as a chance to find love or companionship, while scammers see an opportunity to make a profit. Tune in to learn how to protect your money and your heart. For more resources and tips to protect you and your family from online relationship scams, visit AARP's Fraud Watch Network.