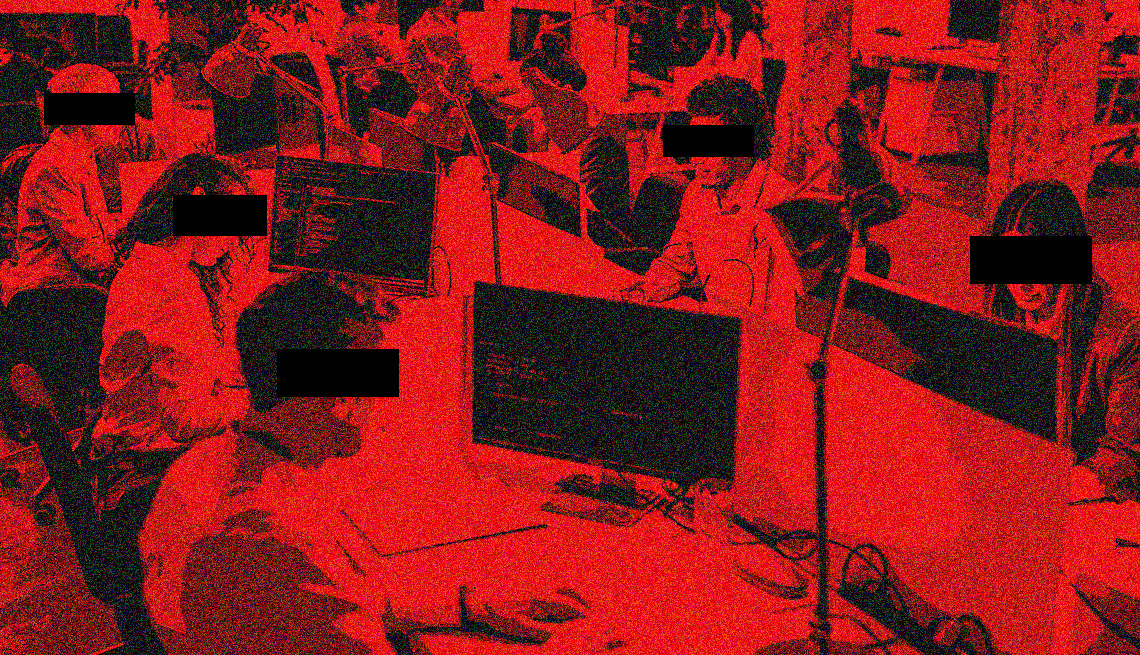 Before the days of the internet, the shady phone call offering you an irresistible investment opportunity likely came from a large suburban office in the U.S., with dozens of “salespeople” sitting side by side, glued to their landlines, the din made up of their pushy pitches. The goals were simple: Bond quickly with the client, then create a sense of urgency: If you don’t act now, you’ll lose the chance to make thousands of dollars!

Today, so-called boiler rooms (named that because the original illicit call centers were often set up in building basements) remain arguably the top purveyor of consumer fraud. They’re the ones bombarding your phones, email accounts, social media feeds and text screens with false pitches. And they still use those same high-pressure sales techniques. But technology has supercharged their scamming capabilities.

At the Beverly Hills office of Metals.com, a precious metals company that the federal government shut down in 2020 for defrauding older Americans out of $185 million, as many as 200 people sat in front of brand-new Apple computers, fitted out with headsets and an automatic dialing system that made calling hundreds of potential victims a day seamless, according to a former employee of the company who spoke to AARP on the condition of anonymity.

“You would just log in to the computer, you would turn your phone on ‘green,’ and it just automatically starts dialing for the next nine to 10 hours of your day,” the employee says. “The office was ridiculously loud.”

Boiler rooms are set up by a variety of actors. Some are former boiler room employees themselves; others used to be legitimate securities professionals who were previously accused of breaking the law.

A modern boiler room can also be a much cheaper, simpler operation. “People can do this from their homes if they want to,” says Joe Borg, head of the Alabama Securities Commission. “A boiler room that has 50 people in 50 different locations, to me, is still a boiler room.” And location isn’t an issue: Boiler rooms dialing into your home often are based in Southeast Asia, Eastern Europe, India, Nigeria or a Caribbean island. All you need is a computer with an internet connection. Thanks to Voice over Internet Protocol, calling costs are low. You can spoof a phone number to look like it’s coming from the next town over, even if you’re actually 10,000 miles away.

Last year, the Securities and Exchange Commission sued an online entertainment and streaming company called Vuuzle and its founder, Ronald Flynn, for orchestrating a $14 million fraudulent stock scheme. Flynn, an American citizen, is charged with running a boiler room operation. His workers were mostly in the Philippines; he monitored his sales employees for their English pronunciation, according to court filings.

Technology has made boiler room sales easier in other ways. “Now they’re armed with additional information before they make the call,” Borg says. As noted, they can mine the dark web, the internet or social media for nearly anything there is to know about a person. Crooks can precisely target their desired demographic, placing ads on social media visible only to those who they think are vulnerable to their scam, picking their age range, political views or location. Just like any company that does online advertising, they know who clicked on what link, what they are passionate about. They find customers who are already primed for their pitches.

And that pitch can come at any time. “We’ve moved to an age where we have emails, and that allows you to drop a fraud request into somebody’s inbox from anywhere in the world, 24/7,” says Greg Ruppert, executive vice president of the Financial Industry Regulatory Authority (FINRA). Thanks to cellphones, scammers can reach you any place at almost any time. “The access that criminals now have to you in terms of time is pretty much unlimited.”

When a boiler room crook actually gets through to a potential customer, that employee usually reads from a script prepared by his or her superiors. It can be very detailed, or it can be more of a set of talking points. The scripts might include quotes about the stock markets or politics from legitimate news sources, although often taken out of context.

“Usually, they would change the script about every week or two, because there were always new headlines,” says the former​ Metals.com scammer.

The more sophisticated operations have two tiers of salespeople: the “openers,” or “fronters,” and the “closers.” The opener will make the initial call; once a potential client is hooked and the opener has established that he or she is good for the money, the client is transferred to the closer, someone with more experience who conveys a sense of authority.

Openers are usually plucked straight out of college or from a different sales background. In the past, they would be recruited through newspaper job ads; now it’s through mainstream online job boards. “You just hire them to read scripts and handle telephone calls,” says Steve Baker, investigator at the Better Business Bureau and former official at the Federal Trade Commission. They might not even know what the scam is. “[The higher-ups] keep them isolated from the operations part of it,” Baker adds.

In contrast, closers know the ins and outs of the business and often strike out on their own. “Senior managers or shift supervisors will leave and set up identical scams,” Baker says.

At Metals.com, the morning meetings had loud music and rousing speeches to hype up the “sales force” before the workday. The payoff was dangled in front of their eyes. “You would literally have to park your Honda Civic, your Kia, your Toyota next to their Rolls-Royces, their Ferraris,” says the former salesperson. “It was the most money-driven group of people I’ve ever been around.”

Crooks Launder the Proceeds of Their Crimes in Countless Ways

With billions of identifiers up for grabs, good cybersecurity is a must

Google Voice scams are among new nuisances that threaten consumers