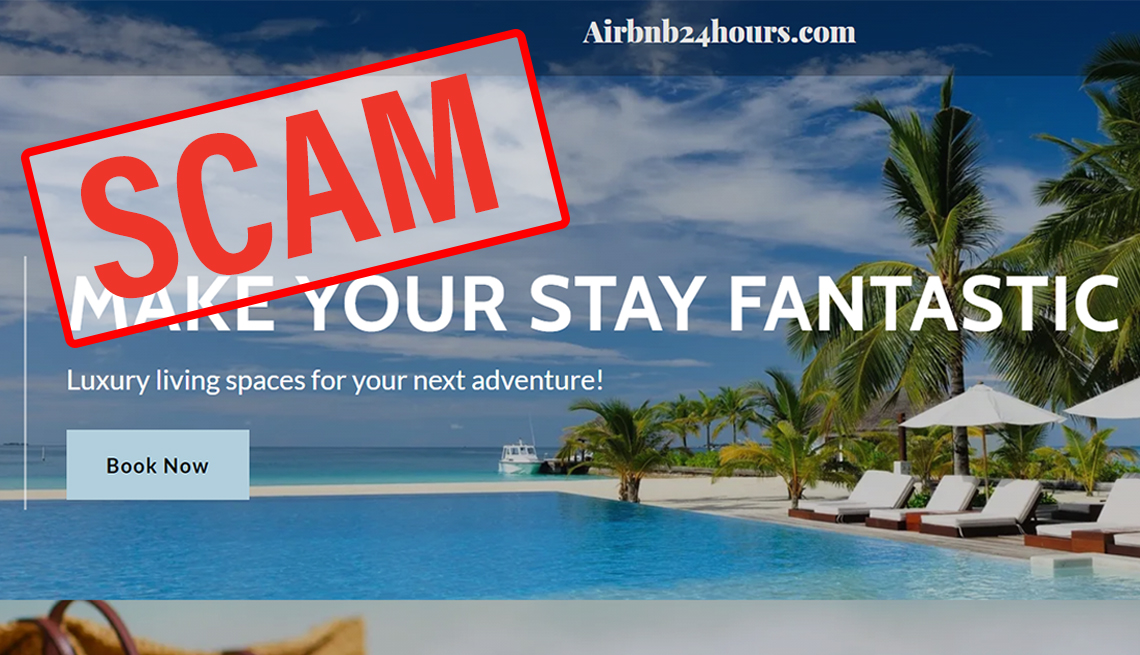 "We work hard to educate the public on the dangers of these malicious, third-party (web)sites and we appreciate that AARP is doing the same."

Phony coupon for Airbnb offers a discount in Mexican pesos. When converted, 1,450 pesos is about $73 U.S. dollars.
BrandShield/AARP

"Scams, fraud and impersonation have grown significantly. We see spikes in different industries since the pandemic started, in fake websites, fake social-media pages and posts. It's definitely something that has increased a lot."

But looks deceive. The photo appears on Airbnb24hours.com, a website the real Airbnb says is fake.

After a cybersecurity firm alerted AARP to the impostor site, it sought comment from Airbnb officials, who acknowledged this week that the website was bogus and said: “Unfortunately, scam artists sometimes use the public's trust in our brand to try to commit fraud.”

Deception is the goal

Ben Breit, Airbnb's global trust communications lead, went on to say that the firm partners with vendors to monitor fake sites and act against the “bad actors who seek to dupe consumers into thinking they're transacting with Airbnb.” He declined, however, to say how many sham sites had been detected.

Today if you visit Airbnb24hours.com — and we don't recommend it — first you likely will see an online warning: “Deceptive site ahead. Attackers on airbnb24hours.com may trick you into doing something dangerous.” The specified dangers include installing software on your device or wresting passwords or credit card numbers from you.

Begun in 2008 in San Francisco, Airbnb has more than 4 million hosts and 5.6 million listings, Breit says, and its revenue comes from charging property owners and guests a fee for its booking services.

On its website, the company cautions consumers about scams and says some arise in fraudulent emails sent from addresses ending in @bnb.com or @reservation-airbnb.com. The fake emails may have links to web pages that masquerade as Airbnb, and the company advises against clicking on any suspicious links.

AARP learned about Airbnb24hours.com from BrandShield, a firm that is headquartered in Israel and hunts down online threats for companies such as Levi's and New Balance. The cybersecurity firm also provided AARP with another impostor site for Airbnb and a phony Airbnb coupon, both of which the firm confirmed were fraudulent.

BrandShield CEO Yoav Keren, 49, says his firm does not work for Airbnb but has other travel industry clients. Fraudsters, he says, have been deceiving consumers on Twitter and Instagram by pretending they are airline agents or creating fake listings for airline and booking sites.

Keren believes cybercrime has risen since the pandemic spurred more reliance on e-commerce. In the U.S., online retail sales stood at $791.7 billion in 2020, or 14 percent of all retail sales, according to a United Nations estimate last May. That's up from 11 percent in 2019 and 9.9 percent in 2018.

Amid the growth, Keren says, “cybercriminals are just booming at the same level."

As reported by AARP, in recent months cybercrooks have targeted retail giants including Amazon and Costco; fundraiser GoFundMe; the United Nations and even priests, pastors and rabbis. “You can see very, very sophisticated scams coming from different places in the world,” according to Keren, whose firm uses machine learning and other tools as it crawls the web in search of fakes. Yet because of how the internet is structured, he cautions, it remains extremely hard to pinpoint the culprit to blame for the scam. For example, a person in China can buy a domain name ending in .com, pay an internet host in the Netherlands and target consumers in Brazil.

Airbnb urges guests not to provide their email addresses before a booking is accepted and to scrutinize emails claiming to be from the company.

Airbnb warns of five common scams, which are not unique to its platform.

1. Advance-fee scam: Someone offers to pay you or give you something if you pay through a service outside of Airbnb.

2. Phishing scam: Someone sends an email or link that appears to be from Airbnb or another trusted site. Such messages try to deceive you into providing confidential information such as passwords.

Phishing messages may contain malicious software to gain access to your computer to gather your personal information, including passwords, the company says.

3. Travel scam: Someone offers you a great deal on a listing if you pay or send a deposit with a wire transfer. After receiving your money, the other party doesn't provide the reservation advertised.

4. Overpayment scam: Someone offers to pay a property owner (or manager) more than the price of a reservation, and then asks for cash to cover the difference.

5. Third-party booking scam: Someone offers to reserve and pay for an Airbnb listing through a third-party website or service, often claiming to have an Airbnb coupon or discount. Typically, these reservations are paid for with stolen credit cards.

Airbnb offers cybersecurity tips that are important regardless of the company with which you're doing business.

If you have any doubt about an email's authenticity, log in to your Airbnb account and go from there, the company says.

Moreover, report fake websites to Airbnb and if you interacted with a fraudulent site or are otherwise concerned about your account's security, contact it here.

At BrandShield, Keren says travelers have become conditioned to shop online for special deals and last-minute bargains, but he prefers dealing with hotels and airlines on websites he trusts are truly theirs. Though he might miss out on a discount, the peace of mind he's bought is worth it.