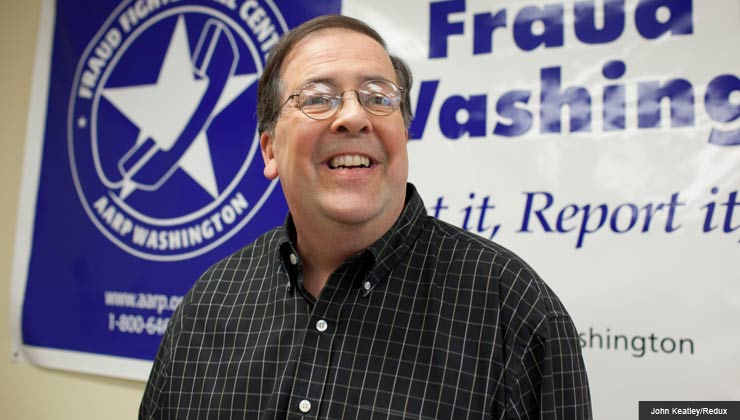 Doug Shadel, co-author of the study that found differences between victims and non-victims of fraud, urges people to avoid risky sales situations and emotional persuasion tactics.

Kathleen, a retired bookkeeper, received a letter last year announcing she had won the Jamaican national lottery, along with what looked like a check for $3.5 million. She called the phone number given and was told she'd receive the prize if she wired money to cover various fees. Over several weeks, she sent three $500 wire transfers.

Then Kathleen, 87, who lives in a senior residential facility in North Bend and who didn't want her last name used, began receiving weekly letters urging her to send more money. She also got daily calls from a young man who threatened to come in person to collect.

Frightened, she went to a Western Union office to wire an additional $500. But workers there alerted the residential center staff, and she grudgingly canceled the payment. Kathleen, who suffers from cognitive impairment, is still confused about what happened.

Kathleen fits the profile of a fraud victim emerging from the AARP Foundation's new National Fraud Victim Study, which shows significant differences between known victims of consumer fraud and the general population. The study's goal was to identify the characteristics of people at higher risk of falling for fraud schemes, thus enabling law enforcement agencies and consumer protection groups to better target their prosecution and prevention efforts.

The study found fraud victims tend to be older, with an average age of 68. Even if they previously lost money to fraudsters, victims were more likely to keep exposing themselves to risky situations, like free lunch seminars. They're also less likely to take preventive steps, like signing up for the national Do Not Call list to discourage telemarketing calls. About a third of the more than 2,200 people studied were identified as fraud victims by law enforcement agencies.

"Victims are much more likely to read every piece of junk mail, go to free lunch seminars, and enter their name in drawings to win a free prize," said Doug Shadel, AARP Washington state director and co-author of the study. "Those are warning signs they could be exposing themselves to dangers they don't realize are there."

There also are clear differences between victims of different types of fraud. Those who lost money in investment scams generally were male, married, with more education and income and an average age of 69. Those hit by lottery scams tended to be female, older (average age 72) and single, with less education and income.

Another key finding is that most fraud victims, particularly older ones, don't admit they were conned or report the crime to authorities. Only 37 percent of people older than 55 identified by law enforcement agenices as victims acknowledged the fraud, and just 25 percent reported it. Shadel said this suggests fraud may be far more common than previously thought.

Law enforcement officials say this type of profile information on fraud victims is badly needed. "By better understanding the actions that put people at risk and general characteristics that victims share, we are all better positioned to protect ourselves and our loved ones," said Washington Attorney General Rob McKenna, R.

Telemarketing fraud is an estimated $40 billion industry that victimizes about 12 percent of adults every year. Many scams now are perpetrated over the Internet and through email.

The Federal Trade Commission reported (PDF) that of the 1.3 million consumer complaints it received in 2010, identity theft, lotteries and sweepstakes, and impostor scams — such as when someone poses as a relative or friend in trouble and calls and asks for emergency money — were among the most common.

Shadel said Americans are more vulnerable to fraud in a bad economy like the current one, due to fears about unemployment, home foreclosures, and investment losses. Indeed, Charles Harwood, deputy director of the FTC's Bureau of Consumer Protection, said his agency has focused its civil enforcement efforts for the past year on schemes that bilk desperate people out of their last dollars by offering them phony credit assistance or work-at-home opportunities.

To avoid becoming a fraud victim, Shadel urges people to avoid getting involved in risky sales situations and emotional persuasion tactics. He offers these tips:

You may also like: Take a pop quiz on scams. >>

Harris Meyer is a freelance writer based in Yakima, Wash.