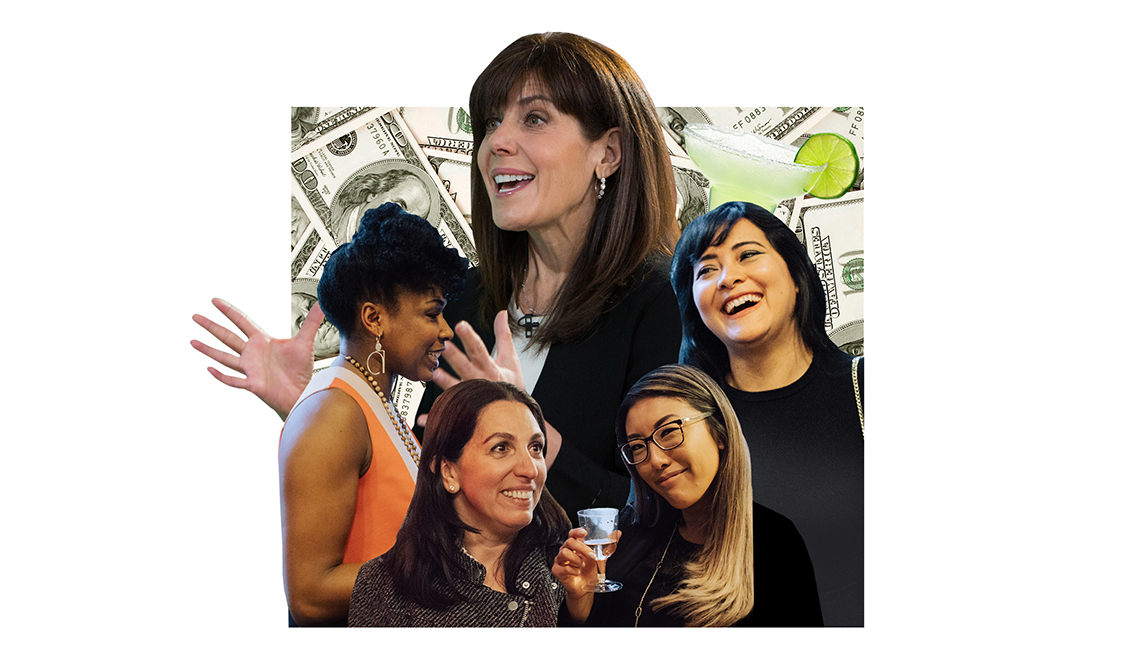 A dozen women, most of us strangers to one another, sat in a bar in Nashville, Tennessee, drinks in hand. The women had responded to a shout-out on my HerMoney podcast: “Let’s get candid and talk about money. I’ll buy the first round.”

It was a varied bunch — married and divorced, gay and straight, early 30s to 60-plus. They included a lawyer, some corporate types and a tattoo artist. “Here’s how this goes,” I explained, passing around a bag filled with strips of paper. “Everyone pulls a question, and then we just … start … talking.”

A wave of nervous laughter went around. It always does. Since I started hosting these gatherings — I call them HerMoney happy hours — early last year, I’ve learned to expect this. We’d rather talk about almost anything besides our finances. But I’ve also learned that these conversations make women feel more powerful and less alone. A few participants have called them revolutionary.

“My biggest financial fear is …” read Jeanne Briggs, 49, a PepsiCo sales director, who had the dubious honor of going first. She took a deep breath. “It’s the fear of running out of money in retirement. My husband is unemployed — he has been for a year,” she told us. “We had an emergency cushion. We’ve used it.” (He’s since found work, she reports happily.)

Other women revealed their own fears. One had married a man who revealed a boatload of debt just before their wedding. Angela Prestil, 54, an executive at the Credit Union National Association, was concerned that her wife wouldn’t engage with their money: “If something happened to me, she wouldn’t know what to do.”

Then Prestil read the question she’d drawn: “What do you want to do with your money that you feel like you can’t?” “Travel,” she said wistfully. Her prior partner, she explained, was financially irresponsible, and Prestil had reacted by becoming a heavy-duty saver, maybe too heavy duty. The table erupted with suggestions: See a planner. Use a retirement calculator. Open a separate travel fund.

The conversation flowed freely as we moved on to other topics: giving kids too little money versus too much, how money makes us feel and whether we’re too risk averse. By the time we wrapped up, the women were exchanging numbers and making plans to meet up without me.

That wasn’t unusual. Participants tell me they rarely talk about money in their day-to-day lives. But once you open the tap on any forbidden topic, you’re suddenly thirsty for more.

And, importantly, these gatherings seem to provide validation: that we’re not alone, that we’re not doing it all wrong, that we’ll be OK. “We all wanted that affirmation,” said Rickie Hall, 62, chief information officer of Nashville-based SMS Holdings. “Did you get it?” I asked her. “Absolutely,” she replied.