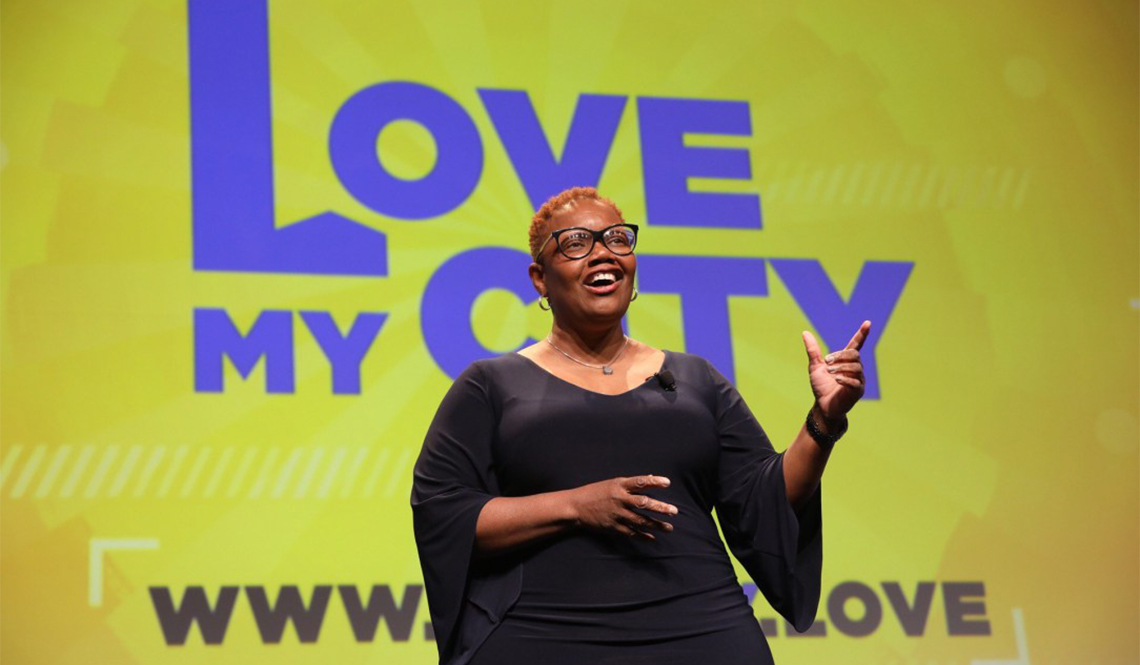 Karen Freeman-Wilson, the mayor of Gary, Indiana, and the 2019 president of the National League of Cities at an event for the "Love My City" initiative. "Whether you are a local leader, a resident, or a corporate partner, we want you to celebrate with us," she explained. "The first step to getting involved is easy — just go to 'mycity.love' and fill out a brief form."

“We understand that citizens are inherently skeptical about government,” noted Karen Freeman-Wilson, the two-term mayor of Gary, Indiana, at the 2018 Cities of Service Engaged Cities Award Summit. “So how do you remove that skepticism?” The answer, she explained, is to make citizens part of the city’s planning and problem-solving process.

COMING ATTRACTION: Take a video tour of Gary, Indiana, at the end of this article 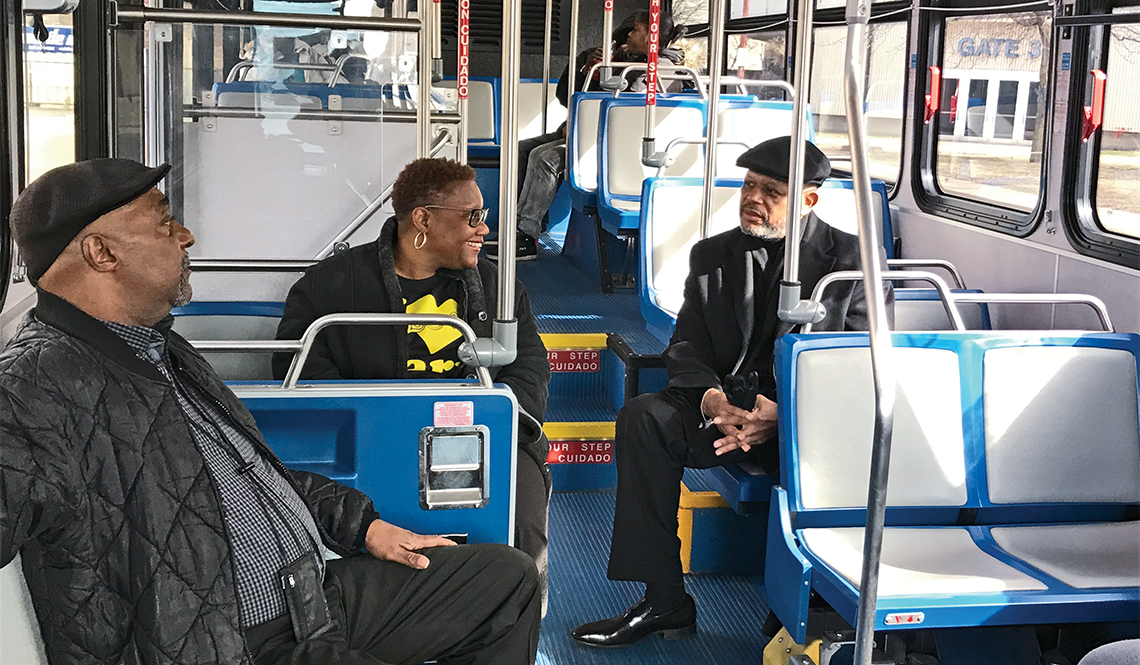 Mayor Karen Freeman-Wilson chats with a passenger while riding one of the city’s new (launched in 2018) rapid transit buses.

Founded in 1906 as a company town by U.S. Steel, Gary, Indiana, is among the nation's "Legacy Cities," which is a term used to describe, according to the Legacy Cities Initiative, "older, industrial urban areas that have experienced significant population and job loss, resulting in high residential vacancy and diminished service capacity and resources."

Freeman-Wilson is the 2019 president of the National League of Cities (NLC), a resource and advocacy organization for America's cities, villages and towns, representing more than 200 million people nationwide. A new NLC effort launched by Freeman-Wilson is the "Love My City" initiative to provide city leaders with, as she describes, "the tools they need to engender love between residents and the communities where they live."  The following four priorities make up the initiative: helping city leaders tackle the housing crisis; uplifting legacy cities; creating communities for all generations; and, encouraging civic engagement.

"The emotional bonds people create with their communities also have a powerful impact on economic prosperity," she notes. "In fact, according to research from the Knight Foundation and Gallup, the stronger the attachment of residents to their communities, the higher the gross domestic product growth. That’s what Love My City is all about."

Following are Freeman-Wilson's answers to AARP's questions about the initiative and NLC's work to create "communities for all generations."

1. What was the inspiration and impetus for establishing “Love My City” as your presidential platform at the National League of Cities?

I ran for mayor of Gary because I love my city and its citizens. Much of what I've accomplished is because of the love and support I received from the community throughout my life. One of the key individuals in this community support system was Mayor Richard Gordon Hatcher, who led our city during my childhood and teenage years. His legacy was the inspiration for my public service.

From my observations of Mayor Hatcher, and from my own experiences, it has always been my position that true leaders lead with love. This is especially true for city leaders. Our citizens need to know that we are committed to delivering good government, and that we care about them as people. We want to know about their hopes and aspirations and how we can support their achievement. When we give citizens our best, there’s an intrinsic value, a sense of satisfaction that we receive as leaders.

The Love My City message allows the National League of Cities to humanize local leaders as accessible people who care about the residents we serve. Citizens are always appreciative when they see a true effort to meet their needs. In a time when citizens are bombarded by divisive discourse and are skeptical of government leaders, the message of love outshines negativity.

Cutting Right to the Chase 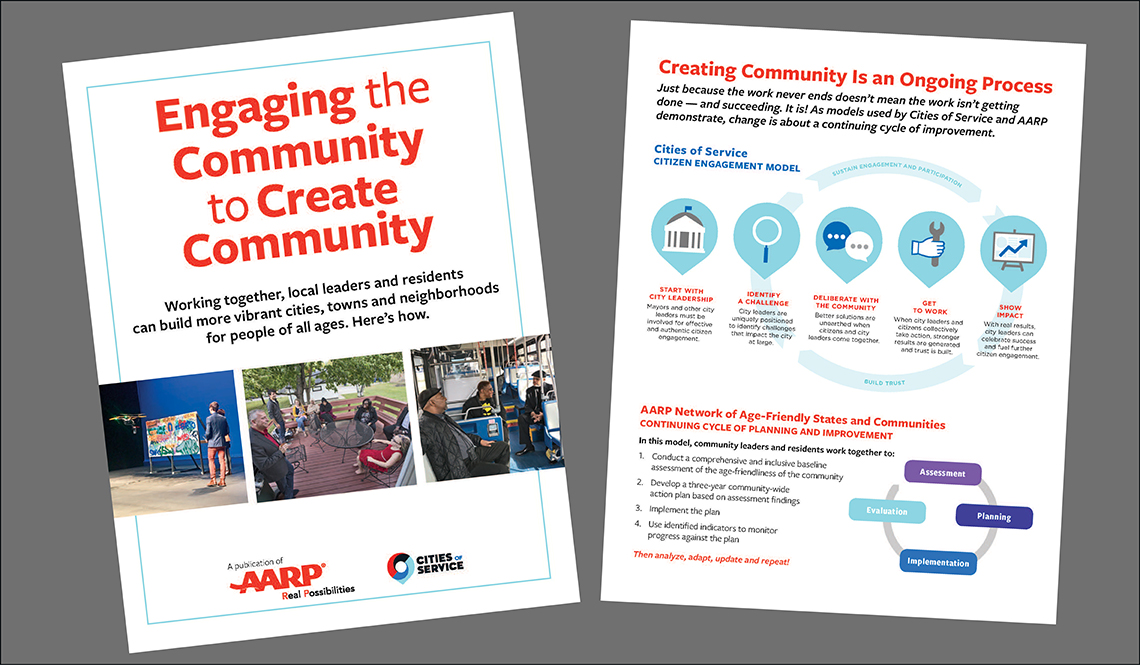 Click on the image to order or download this free, award-winning publication from AARP and Cities of Service.

Mayor Karen Freeman-Wilson, as quoted on page 2 of Engaging the Community to Create a Community:

“I started cutting grass as a way to get out in the community and to really send a message. I would see these lawns where you had two neighbors, one on either side of a vacant or abandoned house. The neighbors would keep their properties pristine, but they wouldn’t cut the grass of the house in the middle. I’d say, ‘Gee, if you cut this grass in the middle, it would make your property look better.’ After seeing the city’s mayor mow the lawn herself, the neighbors generally follow suit. As one man told me, ‘Mayor, if you cut it, then I’m going to maintain it that way.’ ”

2. In your opinion, what are the benefits of creating communities for all generations? What sort of opportunities does such an initiative open up for residents?

When we work to create communities for all generations, it delivers a better product to all citizens. In Gary, we have active programming for our youth through the Youth Services Bureau. This includes our summer job programs, our feeding program and our partnership with the National League of Cities to connect children to nature.

We've twice hosted a Senior Summit and Health Fair for our “Experienced Class.” We regularly host job fairs for citizens of all ages in City Hall. This is especially important in a community like ours with a high poverty rate. We have an active block club initiative, Love My Block, which allows us to connect with citizens of all generations regularly. All of these initiatives work together to make us a city for all generations.

The more ways we connect with citizens, the more likely they are to volunteer, offer suggestions, and see themselves as a part of the image-building and problem-solving team for the city.

3. What tools and resources can communities use to increase civic engagement  —and why is community engagement so important?

So many tools are available to promote civic engagement among citizens. One-on-one and small group engagement always tops the list. In Gary, we have monthly community forums during which citizens can raise their concerns and learn about volunteer opportunities.

I make a point to host and volunteer for community cleanups, which allow me to serve as an example and engage other citizen volunteers. Every other week, I host “15 Minutes with the Mayor.” Residents can sign up to come in and talk to me about whatever is on their mind.

Social media and other technologies have become useful tools to communicate with and hear from citizens. At the same time, we need to be careful about displacing traditional forms of media, such as newspapers, radio and newsletters because not all citizens are active on social media.

We developed an initiative called "Good News Gary” to promote positive news about the city and its progress by using an e-blast, podcast and television show. The use of other technologies are increasingly useful with citizen engagement, too. We use a Gary 311 app so citizens can advise us of their need for city services. We also use an electronic newsletter, “Next Week in Gary,” to inform the public about events and activities.

The more ways we connect with citizens, the more likely they are to volunteer, offer suggestions, and see themselves as a part of the image-building and problem-solving team for the city.

A Century in Business 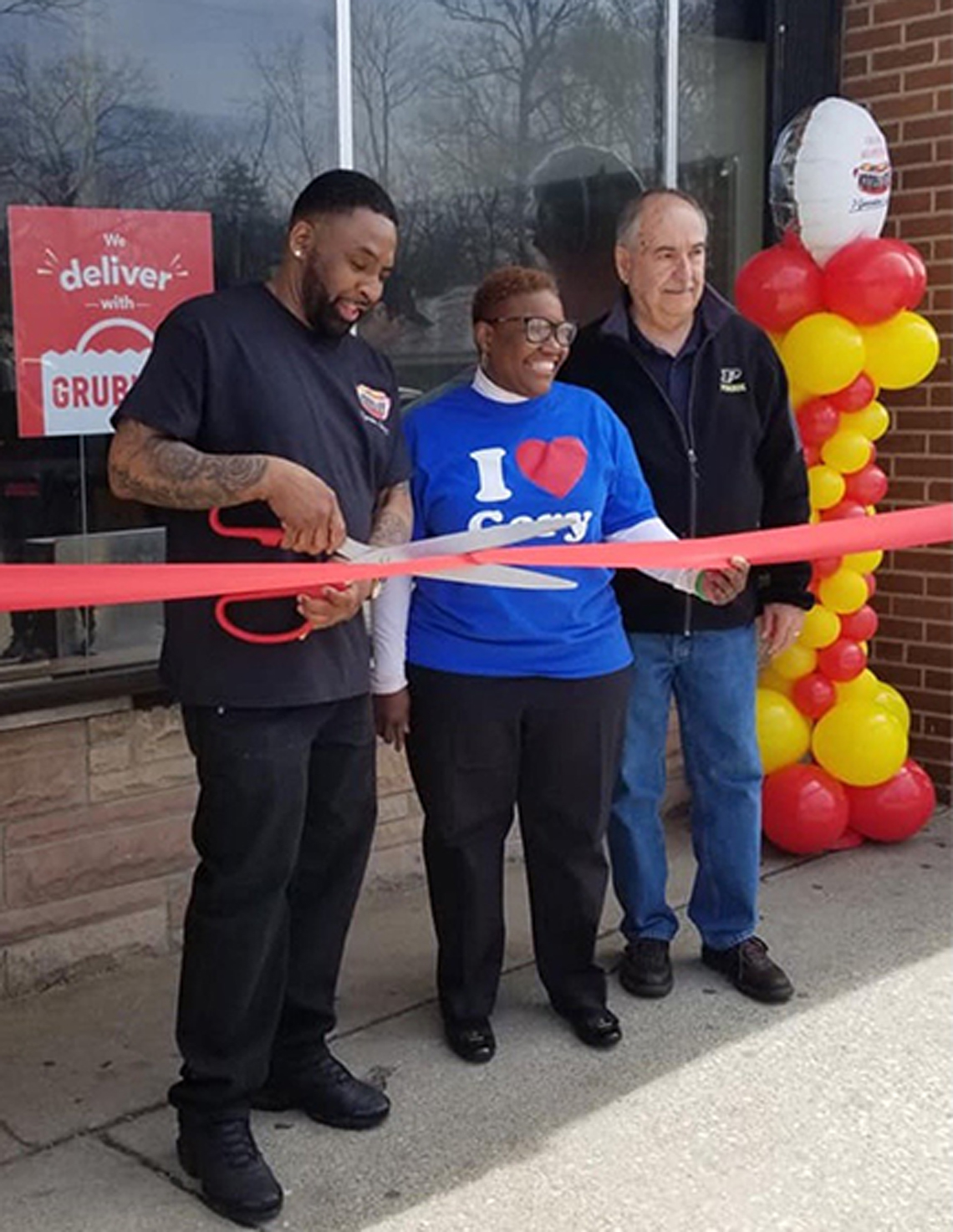 Mayor Karen Freeman-Wilson celebrates the incoming and outgoing owners of a Gary, Indiana, eatery founded in 1920.

Posting on Twitter (she's at @KarenAboutGary) about this ribbon-cutting, Mayor Karen Freeman-Wilson wrote: "Another restaurant has continued in the great city of Gary! Congrats to Jimmy on acquiring and maintaining Koney King ... Congrats to Paul on 50 years in business."

4. Legacy Cities face unique challenges but also have unique assets. Through your leadership of NLC and also as the mayor of a legacy city, what are some of the promising assets that you observe legacy cities having?

It is both an honor and a challenge to lead a legacy city.

It’s an honor because people around the globe recall Gary’s contributions to steel and manufacturing. We all remember when Gary had one of the best educational systems in the country and every day we see vestiges of the beautiful architecture built when the city was bustling.

At the same time, it’s a challenge to inspire new investment to create a renaissance in our city. This challenge allows us to draw on the assets that remain from our past — factors including our location in the population center of North America, our proximity to Chicago (the third largest economy in the United States) and the confluence of rail, waterways, air travel and highways. The challenge also allows us to be creative in the way we develop opportunities for our citizens.

Legacy cities are special because of their historic contributions to our country. But I believe legacy residents are the people who make our city truly special. These citizens have chosen to remain in our city through hardships, exhibiting their belief in the future of our community. They almost take on the role of cheerleaders who cheer for the resurgence of our city. It’s a joy to work for them.

5. Housing can be one of the most vexing issues to address at the local level — particularly to ensure that there is an appropriate, accessible, and affordable housing stock to allow older adults to live independently in their communities as they age. How are you and the National League of Cities working to advance the discussion on this important issue?

Housing is a challenge at the local level for a variety of reasons — affordability, vacancy, accessibility, to name just a few. The National League of Cities has chosen to support cities in addressing these concerns through our research and tools as well as workshops and advocacy at the federal level.

As part of the Love My City initiative, NLC established a National Housing Task Force led by Washington, D.C., Mayor Muriel Bowser and comprised of 20 local officials and two state municipal league executive directors. The task force identified five areas of focus for a report that will include best practices and policy recommendations. The focus areas are community-focused approaches, land use, regional and holistic planning, federal resources, and local housing tools.

The housing task force and the many other efforts at NLC will equip local leaders with the ability to develop tailored solutions to the housing crisis in their community. The task force will release its report to the public this July. I look forward to sharing it with communities across the country then.

Editor's Note: When the National League of Cities housing report is released we’ll provide a link via a postscript to this article.

VIDEO: This is Gary

Learn about some of the work AARP Indiana and the city of Gary, Indiana, have been doing together to make the community more livable for people of all ages.