For eight years, Thomas Smallwood got around relatively well for a man with no legs. Poor circulation had led Smallwood, 63 at the time, to a difficult choice: his legs or his life. He chose the latter. You don't need legs to be a man, he thought. The man makes the legs.

Or in his case, the arms. Until age 71, Smallwood used his arms to amble around his home. But the stairs — five to the front door, 13 once inside — were the problem. "I had to go up the steps on my nubs," says Smallwood. "If I wanted to go outside, somebody had to carry me out."

Over time, the steps turned from a challenge into an insurmountable obstacle. Smallwood got sick; he couldn't get out of bed. Then came the hospital stay and the determination that he could no longer safely live in his South Philadelphia home. Smallwood moved to a nursing home, where he stayed for two years.

"I didn't like it at first," Smallwood says. "I wasn't used to being cooped up. In the nursing home you can't go out like you would if you was home."

Over time Smallwood settled in, but he never lost his will to live on his own again. After all, he could still bathe himself, cook, get himself out of bed on his own. All he needed was a living space that was wheelchair-friendly. In 2008, he qualified to move into NewCourtland Square, a community especially designed to help older people transition out of nursing homes and back to independent living. He seized the opportunity.

"I go anywhere I want. I can ride the bus," says Smallwood. This includes visiting his friends and family in South Philadelphia. "They call it 'independent.'

"Yes, I am independent." 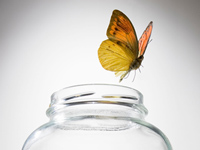 Smallwood was among as many as 12 percent of nursing home residents — 168,000 out of the 1.4 million — designated "low-need," meaning that the assistance that they do need could conceivably be delivered in their own homes or in assisted living. And according to a recent November 2010 pilot study by researchers at Cornell University, more than half of that low-need population could transition back into the community with the right social supports.

"People just assume that a nursing home is a one-way street," says Rhoda Meador, associate director of outreach and extension at Cornell's College of Human Ecologyand author of the study. "But many practitioners don't accept that."

More research is needed to find better ways to determine who really needs to be in a nursing home and who doesn't, Meador says. In her study, Meador found that out of 130 low-need people who social workers believed could live back at home or in assisted living with the right support, 74 were able to safely transition out — a 57 percent success rate. This included nine out of 11 of the people who needed 24-hour care. In one case, family members were willing to provide round-the-clock care in order for their loved one to return home.

The biggest obstacles to overcome were complex medical conditions, lack of family support and the inability to find suitable housing. For example, someone who couldn't get out of bed or a chair by themselves, or a person on oxygen therapy known to still be smoking, would not qualify for community living because of the safety risks.

Many of the participants in Meador's study, called Project Home, likely would have remained institutionalized without the program simply for lack of someone advocating for their return home. For instance, Project Home social workers were able to expedite the construction of a ramp at the home of one participant who had been told it would take six months before the home would be wheelchair-accessible. Eldercare experts say having social workers assigned to shortening nursing home stays — something they say is rare — is a crucial component in returning people to independent living.

"The problem is that the health care system is really fragmented," says Curran Gaughan, social worker with St. Paul's Program of All-Inclusive Care for the Elderly — or PACE — in San Diego. PACE provides social services, on-site medical care, adult day care and home care services to people over age 55 who otherwise would require nursing home care. "If someone doesn't have a real advocate on their side who's putting all the pieces together, it's going to be so hard to develop the system for how [living at home] is going to work."

An advocate can make the difference. At St. Paul's PACE, Gaughan was able to shorten an older person's nursing home stay to just one week after a shoulder injury. Gaughan arranged for Mike Hanson, 62, who is diabetic and also recovering from a stroke, to have a paid caregiver pick up groceries, clean and do laundry once a week. St. Paul's own transportation service brought Hanson to and from St. Paul's, where he receives physical therapy twice a week.

"They make sure the dietitian meets with me and I see the doctor probably a couple of times a month," Hanson says. "The diabetes is under control. I can't say enough about the medical service I get."

And when Hanson had to spend another week in a nursing home after an angina episode, he wasn't afraid that he'd never get out. He knew Gaughan had a plan for returning him home.

"Our goal is to prevent people from staying in nursing homes any longer than they need to," Gaughan says. With Hanson, "we set up additional home care services for him once he went back home, so we knew he'd be taken care of. That really helped the transition happen a lot quicker than it would usually."

NewCourtland, where Thomas Smallwood lives, provides accessible housing to people who otherwise would have to remain in long-term care. Often, someone suffering an injury or stroke is sent to a nursing home for rehabilitation. Then a social worker determines that the person's home — Philadelphia is famous for its narrow, multilevel row houses — is no longer safe.

This is a common scenario, according to Beth Cwiklinski, director of the NewCourtland Life Program. "Accessible, affordable, safe housing is the biggest issue, because they couldn't return to that row home that had 13 steps to get into the house," Cwiklinski says.

Or even worse, after an extended hospital and nursing home stay, an older person cannot return home because there is simply no more home. The patient hasn't, or was unable to, pay the rent and is evicted — a harsh reality considering people want to spend their twilight years in their own homes. A recent AARP poll of people age 45 and older shows that nearly three-quarters of respondents want to remain in their own homes as they age, and that desire increases as people age.

"I've had plenty of people say that they would simply just rather be dead then be in a nursing home," says Gaughan. "It's very sad. Most of our people have developed a real routine in their lives. They know where everything is in their home and they know their neighbors. To be taken out of that routine — it's more difficult for an elder person to handle that kind of change."

Fortunately, a movement is afoot to keep older people independent as long as possible. NewCourtland and St. Paul's are two independent examples, but there's also political momentum based on the theory that paying for community supports could be cheaper than paying for nursing home care.

The Money Follows the Person program, funded by the Deficit Reduction Act of 2005 and 2010's health care reform law, aims to move qualified Medicaid recipients out of nursing homes and back into the community. As of June 2010, 8,500 people have been able to move out of nursing homes, according to an assessment by Mathematica Policy Research. Approximately one-third of those people were over age 65.

Finances play a huge part in why people remain in nursing homes, says Senior Researcher Carol Irvin, who wrote the Mathematica report. Medicaid spends a lot more money on paying for nursing homes than for home- or community-based programs, which the program is not required to cover. If publicly funded, services such as home health aides are usually paid through state-specific waiver programs.

"Many believe it would be more effective, even more cost-effective, for Medicaid programs to serve more people in the community rather than in nursing homes and other types of institutions," says Irvin.

Money Follows the Person aims to figure out whether there is a cost savings, but the data hasn't been compiled yet. In California, Gaughan says programs like St. Paul's PACE, funded by Medi-Cal and Medicare, have been shown to save money over the long term.

"Like when a bird gets locked up it can't fly — that's how it was for me," Smallwood says. "So when I got a chance to get here, I felt free. I've been happy ever since."

Cynthia Ramnarace writes about health and families. She lives in New York.