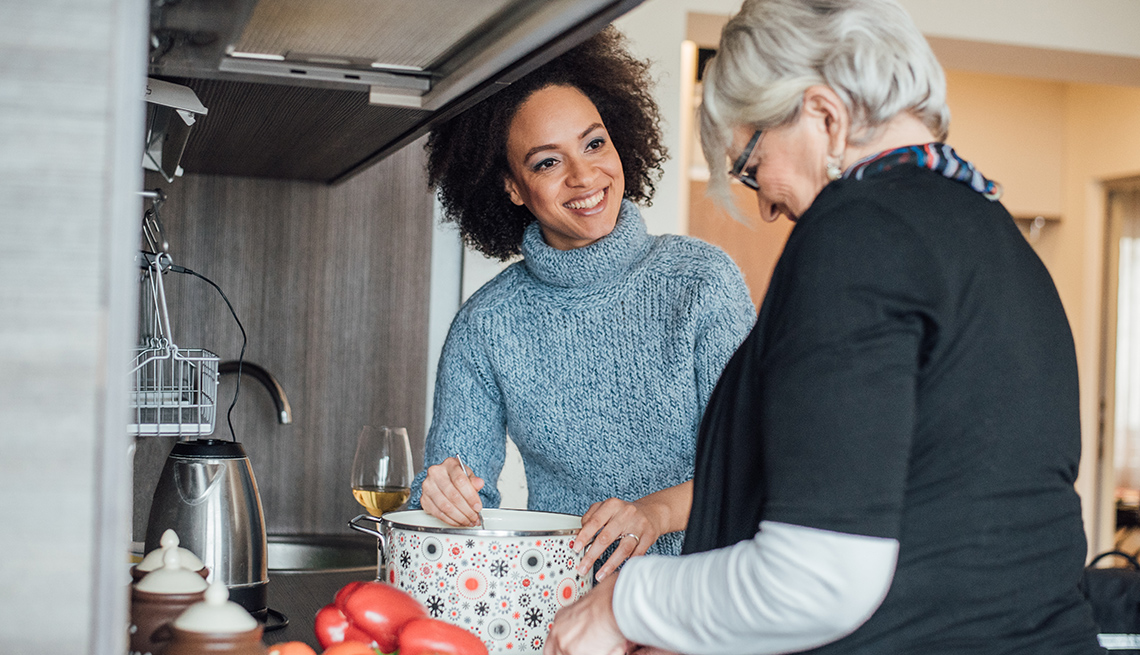 En español | Jackie Stromberg loves her apartment in San Francisco’s Richmond District. It’s in a nice neighborhood west of the Golden Gate Bridge, and she can walk to the bank and a fruit stand she likes, and to a supermarket that stays open late.

Even here, however, Stromberg, who is single, was beginning to feel rootless. She had lost her mother, uncle, aunt and two closest friends, one after another. Nearing 70, she was planning her retirement.

“I was really close to leaving,” she says.

But Stromberg’s beloved apartment has one other important feature: an extra room. So she became one of a small but growing number of seniors to offer space in their homes for rent, in her case through a San Francisco nonprofit that matches older residents with younger tenants.

“This has enabled me to stay,” says Stromberg, who gushes about her new roommate, a 27-year-old who works for the city helping disabled people, and who arrived in June.

“My family, almost everyone’s gone. I don’t have any friends anymore,” says Stromberg, a cheerful former hotel bartender. “At 70, I don’t need a new friend, but we are friendly. We have a rapport with each other. We like each other’s sense of humor. I love to hear about his work. We’ve done really well.”

For seniors, so-called intergenerational home sharing means additional income to help them stay in their homes, companionship, and help with maintenance and chores.

“For some people, staying where they are makes sense, and if having a roommate helps them do that, that’s great,” says Jennifer Molinsky, a senior research associate at Harvard’s Joint Center for Housing Studies who focuses on older adult housing.

It’s also at least a partial solution to the problem of spiraling housing costs for young professionals and students; it’s no coincidence that the idea is taking off particularly in high-priced cities such as San Francisco, Boston and New York.

The number of people over 65 living with nonrelatives has doubled in the last 10 years, census figures show, to about 921,000.

Still, that’s fewer than 2 percent, and population trends show lots of room for more. Twenty-one million adults age 65 and older live alone. Nearly half that number spend 30 percent of their incomes or more on housing.

“There is a critical number of people being displaced or struggling to remain in their homes,” says Karen Coppock, director of the nonprofit Home Match San Francisco. “And isolation is becoming more and more prevalent. Home sharing fits squarely into that. So it’s definitely trending.”

Home Match is one of at least 39 organizations around the country that connect older homeowners with younger tenants, according to the National Shared Housing Resource Center, which provides a directory of them. There’s now even an online start-up called Nesterly that does this in Boston and Columbus, Ohio, with plans to expand into other cities.

The hosts typically set the rent amounts. Odd Couples Housing in St. Louis recommends a range of $350 to $500 a month; Nesterly, up to $700 a month in Boston and $500 a month in Columbus, with discounts for tenants who agree to help around the house. That company also charges a one-time matching fee of from $95 to $195, depending on the length of stay, and gets 2.5 percent of the rent in exchange for handling those payments.

Abby Schult took on a tenant — an accountant going back to school for a graduate degree — through Odd Couples in her 1,750-square-foot Cape Cod-style house in the Forest Park section of St. Louis. The woman pays an amount that just about covers the utilities, “which is a nice thing,” says Schult, 73, a retired actress and casting director. The tenant also helps occasionally with the cleaning, takes out the trash, and feeds the cat when Schult is traveling, she says.

The vetting process is extensive for most of these home sharing programs and includes checking financial, criminal and sex offender records of both host and tenant. Each has to fill out a compatibility form that Coppock likens to a dating application.

It was “way more intense than previous screening processes” he’d been through, says Michael Sokoloff, a music therapist who found a room last year with a 65-year-old homeowner in San Francisco after the building where he lived went through a foreclosure and the new owners evicted all the tenants.

Owners also can set rules such as whether overnight guests are allowed and who gets which shelves in the refrigerator.

Most pairs describe their relationship as friendly rather than friendships. Sokoloff says he and the homeowner where he lives — she asked that her name not be used — share an interest in art; he took her to see a Monet exhibit, for example. And he’s hit it off with her cat, “who has been very kind in sharing her living space with me, too, with the help of Temptation treats from time to time.”

Stromberg says her tenant helps her with the technology that Stromberg concedes she doesn’t always understand, and she occasionally cooks him dinner. “It’s a perfect balance,” she says.

But home sharing isn’t for everyone. Some homeowners realize they like their own space, says Coppock. “For other people, the need to stay at home and stay in your home outweighs the need for privacy.”

Of Home Watch San Francisco’s 171 matches since 2016, only two ended badly, she says, though other pairs broke up when tenants got new jobs or wanted to move in with a significant other.

“We don’t try to convince people to home-share,” Coppock says. “We try to make it easier for the ones who already want to.”

The biggest advantage, says John Levis, 77-year-old cofounder and chairman of Odd Couples, is that casual companionship. Homeowners “finally have someone in the house who can explain to them how to use their smart TV or their computer and gets them sort of moving.”

His model mostly places graduate students from Washington University in St. Louis with seniors who live nearby; there are plans to expand to other college areas, including Raleigh-Durham, North Carolina.

“If you pair two seniors and it doesn’t work out, you’re going to have a displaced person,” he says. “The more we thought about it, the more sense it made” to focus on the older-younger matches.

So far, Stromberg couldn’t be happier about it.