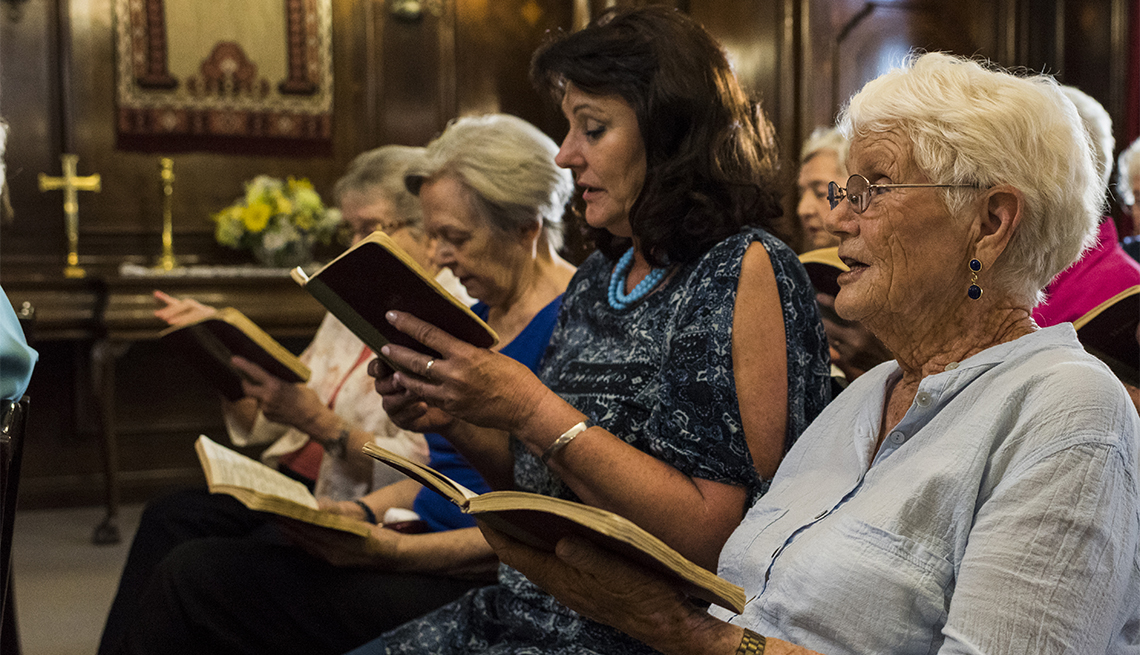 En español | There may be more to praying with your fellow congregants than meets the eye. New research has found that active religious participation can influence your mental health and well-being.

For decades scientists have investigated the link between religion and health. Now a new large study of more than 6,000 adults age 50 and older and living in Ireland has found that individuals who regularly attend religious services have fewer depressive symptoms than those who consider religion important but who don't worship frequently.

The results were based on self-reported interviews about depression and religious attendance, with data collected in four waves from 2009 to 2016 for The Irish Longitudinal Study on Ageing (TILDA) at Trinity College Dublin.

One possible explanation for the later-in-life boost that worship seems to bring, says study lead author Joanna Orr, a doctoral candidate in the School of Medicine at Trinity, is that worshipping with others and the “increased social and emotional support from one's religious social networks” can combat the isolation of living alone.

Orr's study, published in Research on Aging in July, found that social connectiveness was one of the most important predictors of mental health and well-being in those she studied. Congregants who valued their religion but did not regularly attend services had poorer mental health.

There are also some possible nonsocial, psychological benefits of regularly attending worship services, including an increased ability to cope with stress, Orr notes.

Harold G. Koenig, M.D., professor of psychiatry and behavioral sciences in the Duke Center for Aging and Human Development at the Duke University School of Medicine in Durham, North Carolina, agrees. As he puts it, “There are not a lot of things that do what religion does,” adding that research on religious involvement shows links to mental as well as physical health, including “cardiovascular and immune function.”

Koenig also believes that attending regular worship services helps boost positive emotions and neutralizes negative ones — and that this may influence longevity, possibly by lowering stress.

Recent studies have borne this out. In 2016 a study published in JAMA Internal Medicine found that women who went to religious services more than once a week had a 33 percent lower risk of death than those who didn't.

In 2017 in a study published in PLOS One, lead author Marino Bruce, director of the program for research on faith and health in the Center for Research on Men's Health at Vanderbilt University in Nashville, found that attending regular worship services led to a reduction in the body's stress responses as measured by things like cortisol levels, stress hormones and changes in immune function.

His team also found that more frequent churchgoers (more than once a week) had a 55 percent reduction in mortality compared with nonchurchgoers.

Christopher Ellison, dean's distinguished professor in the Department of Sociology at the University of Texas at San Antonio, said it's possible that regular attendance at religious services may have other key benefits not measured in the study — such as a “more robust prayer life” or “greater reassurance about the afterlife.” If so, these factors could be even more important to well-being than the benefit of social connectedness that religious services bring, he notes.

While experts say much more research is needed, those who attend church frequently have their own ideas about the gifts of doing so.

Diane Holbrook, a widow who is almost 88, has belonged to the United Church of Santa Fe in New Mexico since 2004, participating there in everything from yoga classes, pot luck dinners and climate control discussions to book, meditation, and prayer groups. Beyond attending Sunday service, she notes, “I'm doing a lot of things I would not ordinarily be doing. Certainly, part of my key to a long life is I have a belief about the world and it is positive in spite of what is going on. I also belong to a church community that keeps me active and among friends. The church is stimulating mentally and physically."