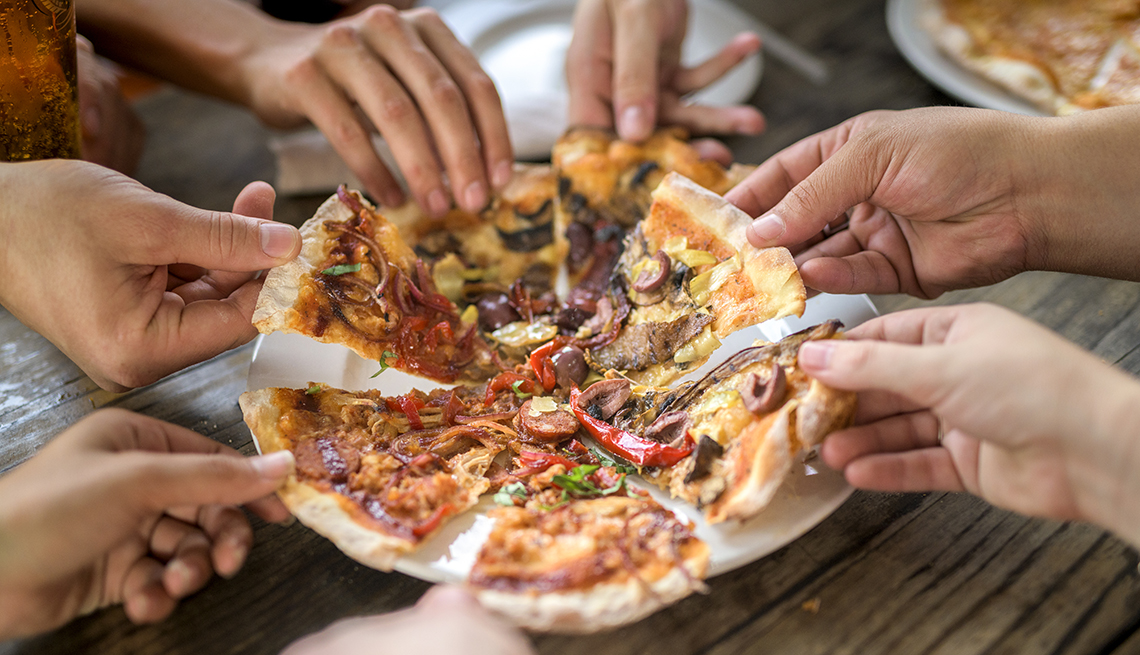 En español | It's personal. That's what most of us assume when we think about weight. Oh, if only I hadn't had that doughnut this morning. Why didn't I ask the waiter not to bring the breadbasket at lunch. And why didn't I get out to take a walk at lunch? But as it turns out, your weight isn't only about you; it's also about your friends, family and coworkers.

A well-known 2007 study done by Nicholas Christakis, then at Harvard University, and James Fowler of the University of Pennsylvania found that if you have a close friend who is obese, your chances of becoming so as well increase by 57 percent, and if your spouse is obese, your chances are 37 percent. While the reasons for those surprising results may be complex, research proving the close relationship between friends and weight keeps accumulating.

A more recent study discovered that our friends influence our eating habits not only when we are together but when we are not. Traci Mann, founder of the Health and Eating Lab at the University of Minnesota, explained the experiment this way: Researchers put three friends into a room together and brought in a tray of freshly baked chocolate chip cookies. Two of the participants had been told ahead of time not to eat the cookies. So what did the third friend do? The same. But here's the interesting twist. Afterward, the friends were put into three different rooms, each with a plate of the cookies, and the third friend still resisted them. Mann's explanation for this mimicking of self-control? “People conform to groups and learn their habits from other people."

"We typically seek out people who are similar to us,” says Angela Murad, wellness dietitian at the Mayo Clinic Healthy Living program. “And we find that our patients really struggle with social activities that involve eating.” That's partly because we are usually not being active when we dine out, she says, and meals often include alcohol, which is high in calories and diminishes our awareness of how much we are consuming.

When it comes to losing weight, the company you keep continues to makes a difference. According to a 2016 study by a Baylor University researcher, heavier people were more likely to successfully lose weight if their social circle included slimmer buddies.

In other words, bad habits may be contagious, but good habits can be, too. Here’s how to use that fact to your advantage.

Prepare for meals with friends, family and colleagues

“We have to set ourselves up for success, so the main thing we tell people who are trying to lose weight is to plan ahead,” says Staci Lupberger, wellness and weight-loss programs manager at the University of Colorado Anschutz Health and Wellness Center. “Visualize what the menu or buffet table is going to look like and what choices you are going to make. You can even pull up the menu online ahead of time so you already have an idea of what to order.” But what happens if you feel pressure to eat like those around you? “In a lot of our programs, we talk about assertive communication — speaking up for oneself — and how to practice those habits,” Lupberger says. “If it's a family situation — say, you have in-laws who are great cooks and might be insulted if you don't eat their food — be pleasant, thank them, but say you'd prefer to stick to the healthier options. Once a person starts feeling better and losing weight, it helps them deal with those situations better."

It could be a Meetup group that walks three times a week or a healthy-eating program organized by a local hospital or WW (the new name for Weight Watchers). “There are many support groups available online,” says Malissa Wood, M.D., codirector of the Corrigan Women's Heart Health program at Massachusetts General Hospital and coauthor of Thinfluence, “and it's a lot easier to accomplish something if you have support than it is to do it alone.”

Along with the contagious aspect of healthy or unhealthy eating, multiple studies have exhorted the benefits of group exercise. One 2018 university study found that physically healthy adults who walked in groups were more likely to stick with the activity than those who walked alone. What's more, a 2017 study published in the Journal of the American Osteopathic Association showed that people who exercised in groups had greater improvements in both physical and emotional health than those who worked out alone. And evidently, the age of your cohort matters, too. Indeed, a study last year from the University of British Columbia found that older adults are more likely to stick with an exercise program if they can participate with people near their age (gender didn't seem to make a difference).

Come up with alternate activities — or alternate friends

“If you find that with certain friends, you are always eating out,” says Murad, “be an influencer and suggest other ways of being social rather than going out to eat.” That may mean visiting a museum, going to a concert or walking in the park. If you want time to sit down together, suggest getting tea or coffee, instead of a meal. It may also be useful to make some new friends or, as Lupberger says, to “shift your support system to people who also want to be physically active and to eat healthily."

Don't be shy about bringing your own food

“The default for most office environments is high-carb, simple-sugar, high-fat snacks, so we talk to people about bringing in fruit, whole-grain snacks and other healthier options to work and kind of set the tone,” Lupberger says. And if you are going to a friend's house, say, for a football game, offer to bring healthier options like vegetables and hummus, Murad suggests, and limit yourself to smaller portions of the not-so-nutritious options.

Wood advises “changing some of the dynamics” of eating: “You've heard of the French paradox? The French eat cheese and drink wine, but guess what else they do? They mindfully eat. In the U.S. everyone's in a hurry. So turn off telephones, don't eat while surfing the internet or sitting in front of the television, and make meals a sacred time.” To apply this idea to your get-togethers involving food, try inviting just a few friends over; serving smaller, healthier portions; and simply letting the conversation roll.