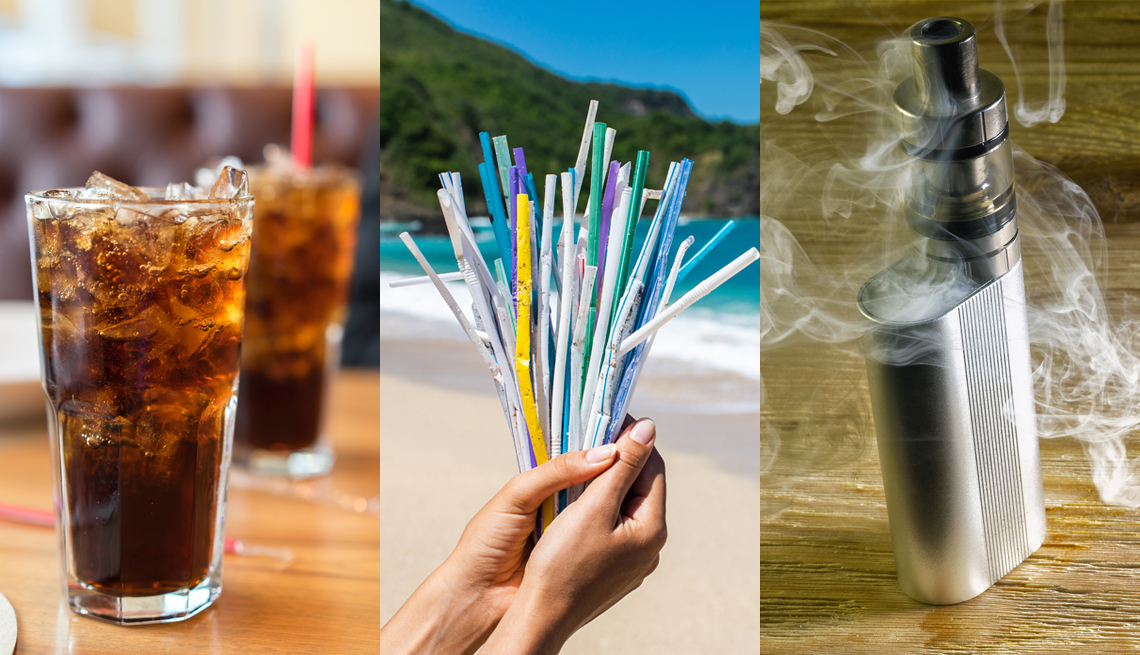 En español | Some trends from the past decade will easily carry over to the next (silver hair and stylish flats, we're looking at you). But others are best left behind.

Judging by the number of avocado toast photos shared on social media, one might assume the days of low-fat diets are over. But the craze that peaked in the 1990s is still around. A recent Gallup poll found that more than half of Americans try to avoid fat in their diet.

"There was an unanticipated consequence” to the low-fat movement, says Alice Lichtenstein, a professor of nutrition science and policy at Tufts University and director of the school's Cardiovascular Nutrition Laboratory.

"When fat was taken out of products, it was replaced with refined carbohydrates,” which many health experts blame for the country's obesity epidemic, she explains.

"I don't know how we're going to get rid of that low-fat message, but it's something that should be left behind,” Lichtenstein says.

When electronic cigarettes (e-cigarettes) were first introduced, they were promoted as a smoking cessation tool and a safe alternative to traditional cigarettes, which cause more than 480,000 deaths each year in the U.S.

But over the last decade, Americans have learned e-cigarettes are not harmless.

Vaping (the term used to describe e-cigarette use) has so far been linked to more than 2,500 hospitalizations and 54 deaths for lung injury, the Centers for Disease Control and Prevention (CDC) reports. It has also hooked a new generation on nicotine, while showing little evidence that e-cigarettes help adult smokers quit.

There are proven and safe methods for quitting smoking, however, including nicotine replacement therapy and federally approved medications. Public health experts still urge anyone who wants to stop smoking to talk to a doctor, nurse or trained counselor to figure out the best strategy.

A small tool once ubiquitous to our grab-and-go culture is becoming more uncommon.

Plastic straws are being phased out in many areas of the country, thanks to efforts led by local lawmakers and big businesses, including Starbucks. The bans are part of a bigger push to cut down on all the single-use plastic that's piling up in landfills and polluting wildlife and waterways.

Americans generated 35.4 million tons of plastic waste and sent 26.8 million tons of it to the landfill in 2017, the Environmental Protection Agency (EPA) reports. Plastic straws are part of that statistic; they're also one of the most littered plastic items, which means they end up in rivers, streams and oceans, the agency says.

Many coffee shops and restaurants now offer paper or compostable straws as an alternative to plastic; trendy restaurants and bars have turned to metal options.

Interested in curbing your use? Order your next drink straw-free. If you find you need one, pack your own reusable straw — there are lots of glass and metal options, some with their own carrying case.

You read that right: We're kissing the darling vegetable of the decade “goodbye” as we ring in 2020. That's not to say you shouldn't eat kale, because you should. It's packed with vitamins and nutrients. But so are a number of other leafy greens, including collards, mustard greens and bok choy.

These vegetables tend to be available fresh throughout the year in most grocery stores. You can also find high-quality frozen options, which are great for adding into soups and stews, says nutrition expert Lichtenstein.

Not a fan of the varieties mentioned thus far? Keep exploring. There's no shortage of nutrient-dense vegetables out there.

"[People] shouldn't feel guilty and they shouldn't just give up. There are so many others that are equivalent and just as good for you. The important thing is they get eaten,” Lichtenstein adds.

Another trend that's “probably best to leave behind” is coconut oil, Lichtenstein argues.

Once hailed for its health benefits, the latest evidence says there is “no well-established advantage” to coconut oil and that a lot of its health claims “have not been substantiated,” Lichtenstein explains. And because coconut oil is high in saturated fat, “there really are signals of disadvantages,” she adds.

While the nutrition label on the back of food packaging is heavily regulated, the front of boxes and bags remain the Wild West for messaging. Products are littered with language claiming a food is “natural,” “sugar-free,” “heart-healthy” and “a good source of vitamins.”

The problem with these labels, says Lichtenstein, is they can make a food seem healthier than it is.

"Something can be very low in sugar and saturated fat, but that doesn't necessarily mean it's good for you if it's really high in sodium,” she points out.

Instead of relying on misleading front-of-package labels, choose foods based on the nutrition facts panel and ingredient list, located on the back of the box or bag, experts say. And opt for whole, unprocessed foods whenever possible.

Between 30 and 40 percent of the country's food supply gets wasted each year, U.S. Department of Agriculture (USDA) data show. Recent efforts to rein in food waste have ramped up with campaigns calling on consumers to opt for “ugly” fruits and vegetables, and to get creative with their leftovers.

However, the best way to reduce food waste is “not to create it in the first place,” the USDA says. Consumers are encouraged to shop smart, plan out meals and buy only what is needed.

If you have a fridge full of limp-looking vegetables, throw them into a pot of stock for a quick and easy soup. And treat “sell by” and “use by” dates as guidelines. Expired food can cause illness, but too many people throw out food that is still good because of confusing labels, a Harvard study found.

Finally, consider composting food scraps to cut down on the amount of food that winds up in the garbage. When food breaks down in the landfill, it releases methane, “a potent greenhouse gas,” the EPA reports.

Study after study show that sugar-sweetened beverages can sour health goals, tacking on unnecessary calories and packing on unwanted pounds. Fortunately, there are plenty of alternatives to traditional juices and sodas.

A booming sparkling water industry offers carbonated options for those who crave fizz. Gadgets that infuse natural fruit into water are a good option for people who want flavor.

If you're a current soda drinker and are looking to cut back, try a zero-calorie version, which offers a “clear advantage” when consumed in moderation, Lichtenstein says.

A Harvard study found that drinking one artificially sweetened beverage per day instead of a sugary one lowered the risk of premature death.

Trips to the doctor's office

Telemedicine is changing the way doctors and patients check in for a checkup.

Insurance claims for telehealth services grew 53 percent from 2016 to 2017, according to the American Medical Association, and experts expect the field will continue to advance.

If you have difficulty accessing traditional medical care, ask your provider if remote visits are a possibility. More than 75 percent of U.S. hospitals are connecting with patients and consulting physicians through technology, the American Hospital Association reports.

Gone are the days of dull and dry veggie burgers. Thick, juicy, meat-like (but meat-free) patties have exploded on the market, and the top brands have landed spots on fast-food and restaurant menus.

But nutrition expert Lichtenstein says consumers should exercise some caution before digging into a plate piled high with meat substitutes. The product has some benefits over beef, including a lower carbon footprint. But the faux burgers are highly processed and high in sodium, Lichtenstein points out. They also have about the same number of calories as a beef burger, scientists report.

"We can't just look at one individual aspect of the food. Yes, from a sustainability perspective there are likely advantages of plant-based foods, but that doesn't mean that all plant-based foods are healthier or better than the other option,” Lichtenstein says.