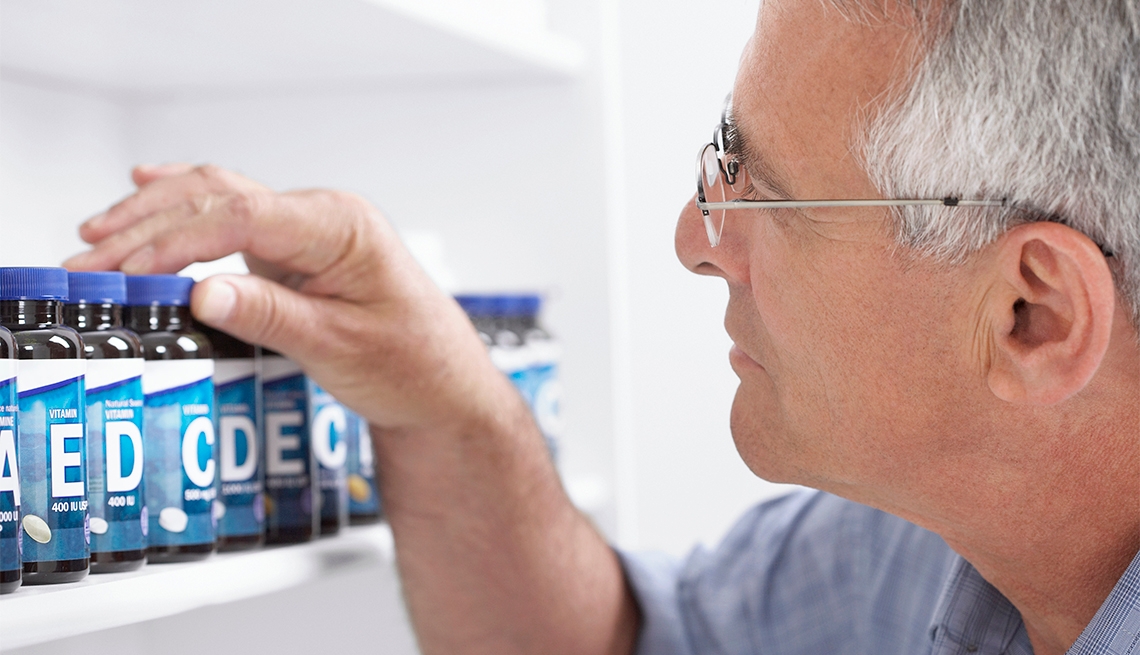 AARP's Brain Health and Dietary Supplements Survey, released today, shows that Americans age 50 and older are wolfing down the biggest slice of the very large brain-health supplements market, one expected to reach $5.8 billion in sales by 2023.

The survey, which sheds light on the both supplement buying behavior and the possible motivations behind it, also reveals some major misconceptions — for one, that supplements are regulated by the government for things like purity of their ingredients or validity of their claims.

The results also show that effectiveness of supplements for boosting memory or brain power is a major concern of those who regularly purchase them — a concern that appears to be more than valid, according to a separate report from AARP's Global Council on Brain Health, also released today. Here's a closer look at who's taking which vitamin, herb or nutraceutical and why.

Survey results show that members of the Greatest and Silent generations are the most likely to be buyers of all supplements, and of those for brain health in particular.

More than three-quarters of adults over age 74 take some sort of vitamin or dietary supplement, as do almost 70 percent of boomers (those between 55 and 73). “The older people are, the more likely they are to turn to supplements because they begin to develop concerns about their health, especially conditions such as dementia,” says Tod Cooperman, president and founder of ConsumerLab.com, an independent evaluator of dietary supplements.

AARP's survey backs that up: It shows that more than a quarter of Americans ages 50 to 73 are regularly taking supplements for their brain health, and that this figure rises to 36 percent for those over 74.

The most popular supplements adults take for memory enhancement, according to the survey, are omega-3, turmeric/curcumin and green tea.

Three-fourths of respondents were extremely or somewhat concerned about the effectiveness of the ingredients in such supplements — and with good cause, it seems. Though more than 75 percent of those surveyed said they think supplements can help maintain and improve brain health, and though nearly half think they can help prevent and reverse dementia, there's no scientific evidence to support such beliefs, according to an exhaustive look at recent studies by the AARP Global Council for Brain Health.

AARP's survey found that almost 70 percent of adults who report eating healthfully most days of the week also take some sort of vitamin or dietary supplement. “This may be because these are people who tend to be more conscious of their health in general,” says Cooperman.

What's more, adults who say they eat the recommended amount of fruits and veggies every day reported better brain health, regardless of whether they take supplements.

"There may be something protective about getting nutrients from food — for example, they're better absorbed by the body — rather than supplements,” Cooperman says.

Seventy percent of survey responders were very or somewhat concerned about supplements’ safety, and three-fourths were worried about purity of ingredients. This is a very valid concern, says Cooperman. While about half of the people surveyed believe that vitamins and minerals are regulated by the U.S. Food and Drug Administration (FDA), and almost 40 percent believe that supplements like herbs are, they're not.

"People assume that there's more oversight by the FDA than there really is,” Cooperman says. Under current law, dietary supplements are considered food, not drugs. That means they aren't put through the same strict safety and effectiveness requirements that both prescription and over-the-counter drugs are.

As a result, they're considered safe until proven otherwise. The FDA can't stop a company from making a certain supplement until it has proof that it causes harm. “The FDA doesn't regulate these companies, so there's no way to make sure that a product contains what's listed on the label, in the right dosage — and some products even have ingredients that aren't listed,” Cooperman says.

If you're considering taking a supplement, “put as much time into it as you would shopping for a car,” stresses Cooperman. Take the following steps to make sure you're safe: