Glenner Town Square offers comfort for those with cognitive decline 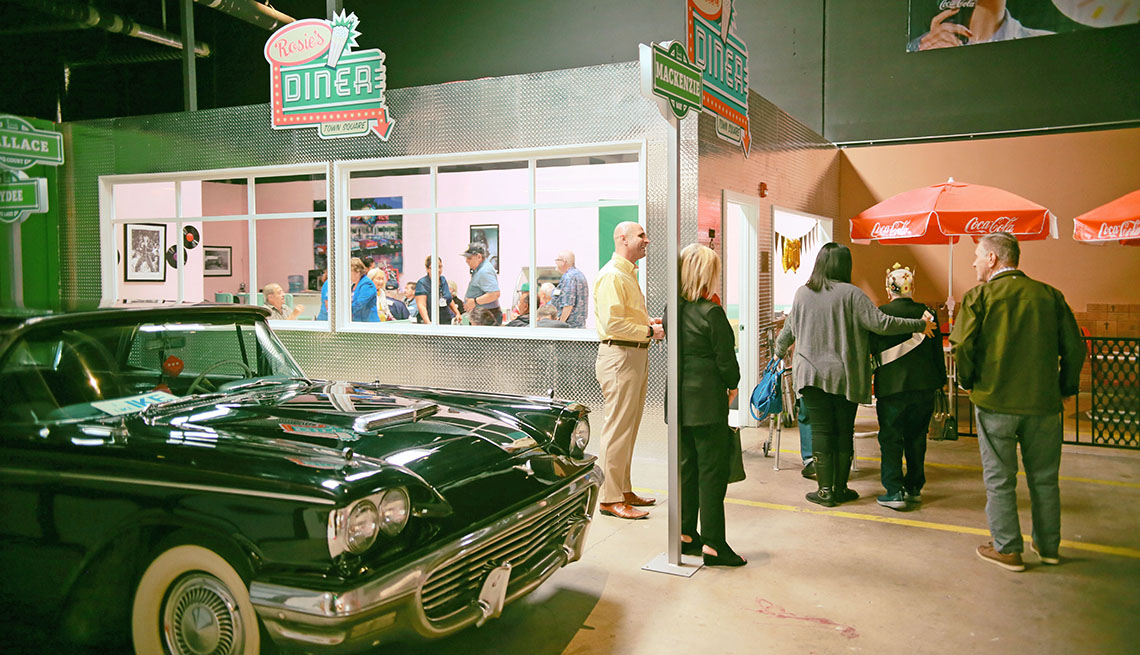 Teresa Pascual celebrates her 100th birthday at Rosie's Diner, where people with dementia can gather for a dose of reminiscence therapy.
Sandy Huffaker
By:
Jennifer Wolff
AARP
December 07, 2018

Mary Patterson bounds through the entryway of Glenner Town Square with a giant smile. Since Mary’s shoulder surgery in 2014, she hasn’t been the same. She forgets anything five minutes after you tell her, says her husband, Ray. Normally sweet and even-keeled, Mary, 87, is now “like two people” — one the woman he’s loved for most of his life, and the other an angry, sad and lost soul who sometimes fails to recognize her husband.

“It’s hard. Very hard,” says Ray, 81, who cares for Mary full time. But since Glenner Town Square, a state-of-the-art dementia day care facility, opened in August, Patterson says he’s been able to take care of the bills again, read books, breathe. And when Mary comes home from Glenner, she is in a better mood and easier to be with. “She doesn’t have her memory back,” he says. “But there’s a difference.”

Located in an industrial building along a nondescript boulevard in Chula Vista, Calif., just south of San Diego, Glenner Town Square is a 9,000-square-foot indoor rendition of small-town USA, where Eisenhower is still president, Buddy Holly sings over the PA system and old movies like Rear Window play in 15-minute clips in the movie theater. An American flag with 48 stars flies outside city hall, near the shiny black 1959 Ford Thunderbird and across from Rosie’s Diner, where pictures of Elvis, Audrey Hepburn and James Dean hang from walls the color of cotton candy.

A growing form of care

The creators of Glenner Town Square hope to revolutionize dementia care through the use of reminiscence therapy, a palliative treatment for patients who have cognitive decline but whose long-term memory remains at least somewhat intact. Glenner Town Square is designed to capture the years between 1953 and 1961, when the average dementia patient was between ages 10 and 30 — the time of life during which, research indicates, many of our strongest memories are formed. Senior Helpers, a national organization that provides Glenner’s trained caregivers, is working with George G. Glenner Alzheimer’s Family Centers to create another Town Square outside Baltimore. The goal is to build 100 more Town Squares nationwide by 2021. 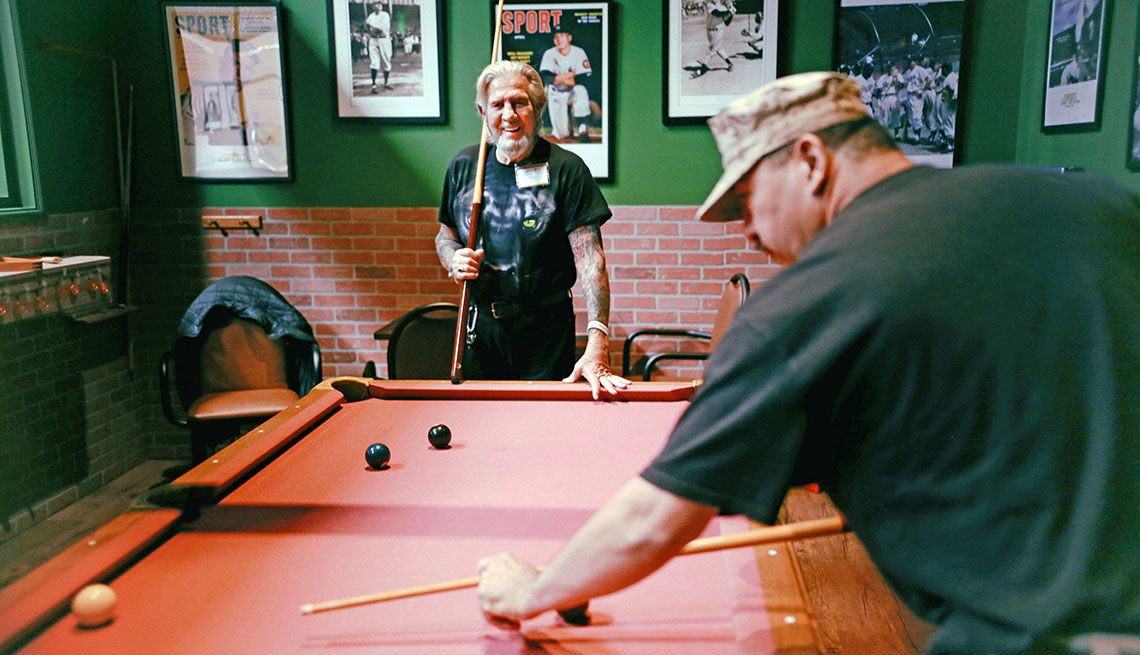 Each of the 14 storefronts within the Town Square represents an iconic place that participants might have visited in their past — the library, the bar, the barbershop, even the opera house. Guests are guided from one nostalgic scene to another in groups of five, staying in each for about 45 minutes, not unlike a high school schedule. Aides play cards with them, help them paint, tell stories and, in one particularly poignant moment recently, had them copy inspiring messages on Halloween cards for sick children at a nearby hospital, and sign them with “I love you.”

A respite for caregivers

The concept of reminiscence-therapy villages grew outside Amsterdam with a small “town” that’s actually an assisted living facility called Hogewey. A report in the Journal of Dementia Care noted that residents of Hogewey settle easily and, as a result, may need less medication than those living in traditional homes.

Glenner is different in that its participants (don’t call them patients) go home at the end of the day. “We’re creating an extra step between being at home and being in assisted living,” says Scott Tarde, CEO of George G. Glenner Alzheimer’s Family Centers, which operates two traditional dementia care centers in the San Diego area in addition to Glenner Town Square.

And research indicates that reminiscence therapy helps those with Alzheimer’s and other forms of cognitive disease feel better in the moment, often calming their agitation, a painful hallmark of the condition. It can also, according to some research, bolster cognitive ability and reduce depression.

“When I first heard about reminiscence therapy about 10 years ago, I was skeptical,” says neurologist Richard Isaacson, director of the Alzheimer’s Prevention Clinic at Weill Cornell Medicine and NewYork-Presbyterian in Manhattan. “But my mind has changed. Being in this kind of comfortable and safe environment where you are offered a structured way to remember the past may boost chemicals in the brain without side effects, and that boost could have a ripple effect. It means you could sleep better, and if you sleep better, you’re more well-rested, and memories are consolidated during sleep so you might have better cognition. This doesn’t reverse Alzheimer’s, but it does have a symptomatic benefit that extends long beyond the hours a patient spends inside a place like this.”

Have questions about caregiving for a loved one? Try our Caregiving Q&A Tool

Caregivers — husbands, wives  and  children — benefit as much from Glenner Town Square’s setup as the participants. Take, for instance, Joey Tennison, a 37-year-old San Diego deputy sheriff whose mother, Susie, moved into the home he shares with his wife early last year. “It strains every aspect of your life, but it’s brought our family closer,” Joey says, recalling the days when he would be at work and his mother would call 20 times in one hour, asking the same questions.

He enrolled Susie, 70, in Glenner when it opened in August, happily paying the $85 a day ($425 a week) for care from 8:45 a.m. to 5:15 p.m. While that’s some 20 percent higher than the average cost of adult day care, Joey — who has visited several nursing homes and assisted living facilities — says it’s well worth it. Private care averages around $20 an hour nationwide, so he sees Glenner as providing  a savings . Plus, Joey says, “This is not just a bunch of old people sitting around a table,” like he’s seen in many other homes.

Susie had a tough time during her first days at Glenner: She was agitated and uncomfortable and called home constantly, Joey remembers. And yet, he says, she seemed comforted by the portraits of Eisenhower and Roosevelt on the  wall,  and the music. “I don’t think she thinks she’s in the ’50s,” he says. “But it all feels familiar to her — and safe.” To ease Susie’s agitation, Glenner caregivers tapped into what they knew about her — she used to be an accountant, so they printed spreadsheets for her to fill out and gave her a desk to work at.

“I’m not saying my mother is getting better,” Joey says. “But she has a purpose now. She even asked us to buy her new dresses because she wants to look good. She got her dignity back.”

Jennifer Wolff is a National Magazine Award nominee who specializes in health reporting.

The Next Wave of Brain Research