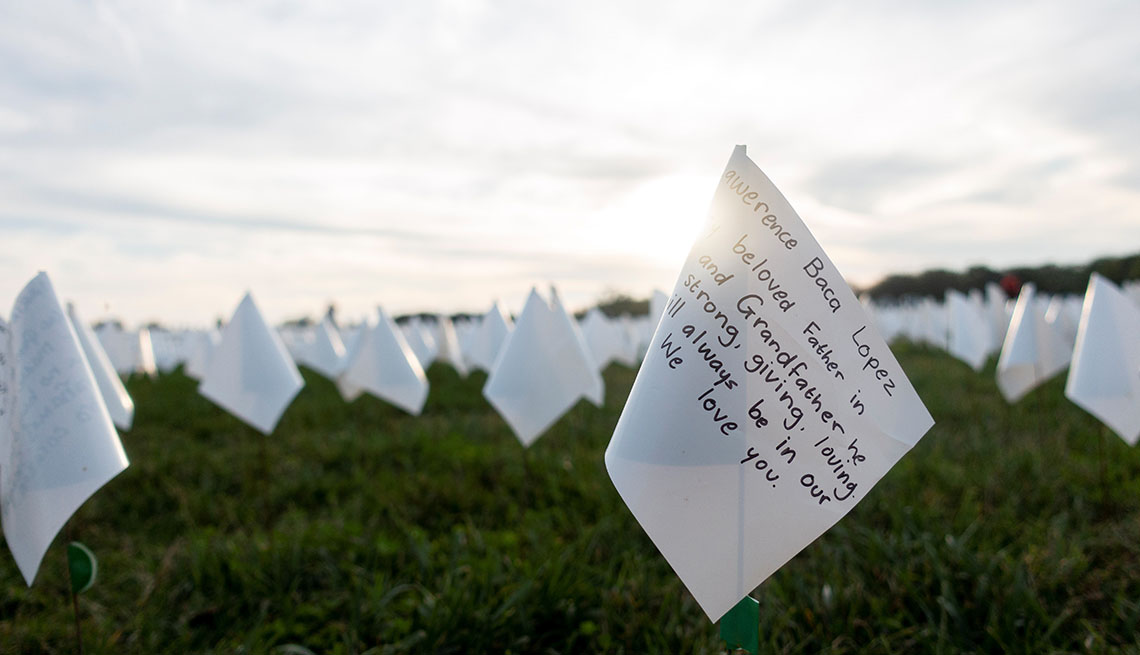 “I remember it like it was yesterday,” James Gasperino, M.D., says of a grim night in March 2020, just weeks after the first case of COVID-19 was identified in the U.S.

Critically ill patients flooded the Brooklyn Hospital Center, where he works, coming in one after another. “And the extremes of respiratory failure were so much more than I had ever seen,” recalls Gasperino, the hospital’s chair of the Department of Medicine, associate chief medical officer and chief of critical care services. “I’m saying to myself, ‘If this doesn’t plateau, we’re going to be overrun.’”

The first wave of the coronavirus outbreak did eventually plateau in New York and elsewhere that spring, but only after more than 100,000 Americans lost their lives to COVID-19. Two years and several waves later, 900,000 more have been added to that tally, for a total of 1 million — roughly the population of San Jose, California, the country’s 10th-largest city.​​

That’s 1 million “empty chairs around the dinner table,” President Joe Biden said in a statement recognizing the once-unthinkable figure. “Each leaving behind a family, a community, and a ﻿Nation forever changed because of this pandemic.”

Indeed, another heartbreaking number accompanies this tragic milestone: 9 million. That’s how many Americans have lost a grandparent, parent, sibling, spouse or child to COVID-19, researchers estimate.

While people of all ages have perished from COVID-19, the vast majority of deaths have been among America’s older population. Adults 65 and older make up about 75 percent of COVID-19 deaths. Add 50- to 64-year-olds, and the percentage shoots up to 92.8.

People living and working in nursing homes and long-term care centers have been hit especially hard by the disease, known to attack the lungs and other organs in the body. More than 200,000 residents and staff members in these facilities have died from COVID-19, federal data shows. This number makes up over 20 percent of all COVID-19 deaths in the U.S., though at one point the share was closer to half, the Kaiser Family Foundation reports.

Data collected throughout the pandemic highlights other vulnerable groups, as well. More men than women have succumbed to a coronavirus infection, and people with common medical conditions like obesity, diabetes and cardiovascular disease have died at higher rates than their peers. What’s more, Blacks, Hispanics and American Indian/Alaska Natives have shouldered a disproportionate burden of deaths from the disease, as have communities with higher levels of poverty.

“This pandemic left an irreplaceable hole in our country, and underserved communities, communities of color, and frontline workers have frequently carried the heaviest burden, underscoring the inequities that we must address as we move forward,” U.S. Health and Human Services Secretary Xavier Becerra said.

Surges and variants drive up deaths

In the early days of the pandemic, physician and health economist Christopher Murray, M.D., never thought the U.S. would pass the 1 million mark. But he says initial restrictions put in place to slow the spread of the virus were eased too soon, and a winter surge that hit before the vaccines were widely available, followed by the rise of more virulent variants, most notably delta, made matters worse. “And that really led to far more deaths than we had ever thought we would see,” says Murray, professor and chair of health metrics sciences at the University of Washington and director of the Institute for Health Metrics and Evaluation.

While reaching 1 million deaths in just 27 months seems unfathomable, it would have happened much sooner without vaccines. A recent report from the Commonwealth Fund found that the shots have prevented more than 2 million coronavirus deaths. The latest data shows that unvaccinated people are about 10 times more likely to die from COVID-19 than their vaccinated peers.

The omicron wave has since receded, but experts caution that the pandemic isn’t over, and older adults, especially, need to remain vigilant.

Subvariants of omicron are causing a bump in infections; hospitalizations are also starting to tick up, and hundreds of Americans are still dying each day, though experts don’t expect deaths will spike to the degree they did during the omicron and delta surges. Murray’s health metrics institute predicts the U.S. will see an additional 20,000 deaths from COVID-19 by September.

“People who are older and have lots of comorbidities are always going to be at higher risk for death” from COVID-19, Gasperino points out, referring to the presence of two or more underlying medical conditions. “So they have to take the more serious precautions and stricter precautions.”

Staying up to date with the vaccines is key. Health officials encourage all adults to get a booster shot if they haven’t already. Adults 50 and older are currently eligible for a second booster shot.

Wearing a high-quality mask, such as an N95, in crowded indoor settings is another important protective step, since these so-called respirators are highly effective at blocking virus-sized particles when worn correctly — even if others around you aren’t wearing a mask.

“The evidence on masks is really very compelling,” Murray says. “You can protect yourself quite a bit by wearing a mask, and they should be in everybody’s tool kit if they are worried about risk in the future.”

Keeping yourself as healthy as possible is also important, Gasperino adds, since conditions like obesity, diabetes and heart disease increase an individual’s risks of severe illness.

COVID-19 was the third-leading cause of death in the U.S. in both 2020 and 2021, but Murray says it’s unlikely the disease will rank so high in 2022. Vaccinations and prior infections have provided a large swath of the population with what Murray calls “immune memory,” meaning that if the body encounters the virus, it’s better able to quickly recognize it and fight it off.

About 66 percent of the U.S. population is fully vaccinated, though less than half of the eligible population has received a booster. And a new report from the Centers for Disease Control and Prevention suggests that close to 60 percent of Americans likely had COVID-19 at some point.

This level of defense, combined with highly effective and more accessible treatments, “means we should not see the degree of death we did in the first two years of the pandemic,” Murray says, though there’s always the risk that another, more dangerous variant could emerge and threaten progress.

“I think we’re at a better place now to treat a lot of the complications related to COVID. I think we have a lot more understanding of the disease process and the different groups that are at higher risk for bad outcomes,” Gasperino adds.

Still, as the pandemic persists, Biden called on Americans to “not grow numb to such sorrow.”

“We must remain vigilant against this pandemic and do everything we can to save as many lives as possible," he said. ﻿

Rachel Nania writes about health care and health policy for AARP. Previously she was a reporter and editor for WTOP Radio in Washington, D.C. A recipient of a Gracie Award and a regional Edward R. Murrow Award, she also participated in a dementia fellowship with the National Press Foundation.​​​​

What to do before and after the extra COVID shot

How Long Does a Booster Shot Last?

Another dose may not be needed yet﻿

FDA Limits Use of J&J Vaccine

But some adults can still get the shot