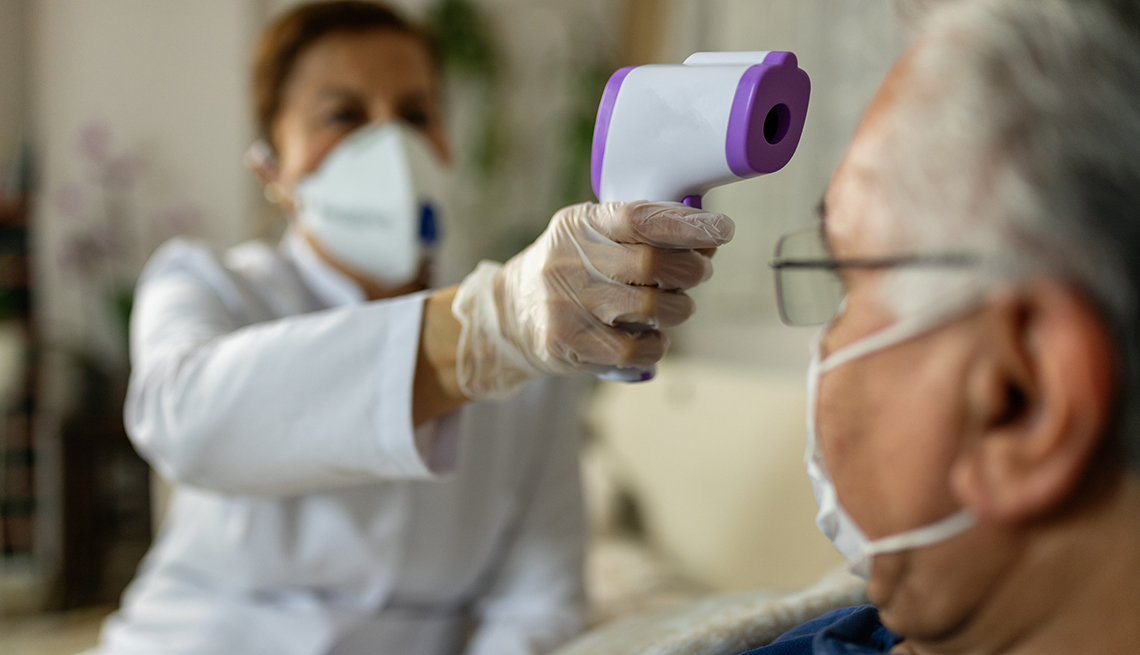 En español | With summer in the rearview mirror, health experts are ramping up their plea for Americans to get the flu shot this fall in an effort to ease the impact of two respiratory illnesses circulating at the same time — an event some have dubbed a “twindemic.”

What the fall and winter will look like — with influenza activity at its peak and Americans still contending with COVID-19 — “remains unknown,” says Costi Sifri, M.D., professor of medicine and director of hospital epidemiology at the University of Virginia. When the coronavirus outbreak started in the U.S., last year's flu season was wrapping up. “So we didn't see how these two viruses or multiple viruses could interact with each other,” he says.

On the one hand, public health interventions meant to slow the spread of the coronavirus (masks, physical distancing and the cancellation of large gatherings) could make this year's flu season relatively mild, since the two viruses are thought to spread in similar ways.

Countries in the Southern Hemisphere, including Australia and New Zealand, have reported lower levels of flu activity so far this year, but experts caution that doesn't mean the same will hold true in the U.S. “Those countries have had a significant amount of success in social distancing,” which probably helped to weaken flu activity, Sifri says. “Whether we have that experience here is not clear to me.”

One way to improve the chances: the influenza vaccine. Though a flu shot will not prevent a coronavirus infection, experts stress it can help ward off a potentially disastrous winter.

Because the two illnesses (flu and COVID-19) are caused by different viruses, experts say it is possible to get infected by both at the same time or sequentially — one right after the other. The effects of a coinfection are still being studied, but early reports show it can be dangerous.

Severe cases of flu or COVID-19 on their own can lead to a life-threatening lung injury, called acute respiratory distress syndrome (ARDS), where fluid leaks into the lungs and breathing becomes difficult. A coinfection with flu and COVID-19 would likely mean “the severity of respiratory failure would be greater,” says Michael Matthay, M.D., professor of medicine at the University of California San Francisco and an expert on treating patients with ARDS. “Or having two illnesses in a row that affected the lungs would make the respiratory failure more severe."

That's where the flu shot comes in. Even if the influenza vaccine fails to prevent the flu (it's between 40 percent and 60 percent effective, according to the Centers for Disease Control and Prevention [CDC]), it reduces the severity of illness in people who get it — meaning it protects flu patients from severe respiratory failure “for the most part,” Matthay says.

"We have a tool for the flu that we don't have right now for COVID,” UVA's Sifri says, referring to the influenza vaccine's ability to soften the blow of a coinfection. “It provides benefits even beyond just preventing flu.”

It's important to keep in mind that the flu is more than a bad winter cold for many Americans. During the 2018-2019 season, it was responsible for an estimated 490,600 hospitalizations and 34,200 deaths, according to the CDC. In previous years, numbers have been even higher. The 2017-2018 season, for example, saw 810,000 influenza-related hospitalizations and 61,000 influenza-associated deaths.

"So, you know, you could imagine that could be an additional strain to hospitals that are already potentially strained during COVID and may become even more so during fall and winter months, as there's competition for hospital beds” as well as health care personnel and equipment, Sifri says.

CDC Director Robert Redfield, M.D., says both illnesses “have demonstrated they can stress our health system.” Since the beginning of March, nearly 370,000 Americans have been hospitalized with coronavirus infections, according to data from the COVID Tracking Project. That is why Redfield is advocating “more than ever” for Americans to get the flu vaccine this fall — “so that maybe you won't get the flu at all, and if you do get the flu, you won't end up in the hospital. And if you do end up in the hospital, you won't end up in the intensive care unit and on a ventilator,” Redfield says.

Older adults and people with underlying health conditions are at increased risk for hospitalization from both flu and COVID-19. A high-dose vaccine that contains four times the amount of antigen and provides greater protection from the flu is recommended for people 65 and older.

"Every American really has the opportunity to have a real impact on making sure that we have the medical capacity that we need for those individuals who may require hospitalization,” Redfield adds.

A high number of flu cases could also contribute to coronavirus testing delays. Flu and COVID-19 share similar (though not all) symptoms, meaning “almost everybody that presents with flu-like illness will, by definition, have a COVID-like illness,” Sifri says — and a diagnosis won't be clear without a test. (Differentiating the two illnesses is important for many reasons, including treatment. There are antiviral drugs that can treat the flu; some treatments have received emergency use authorizations to treat COVID, but so far no drugs have received official approval from the U.S. Food and Drug Administration.)

Over the summer, a nationwide coronavirus testing backlog led to longer-than-recommended wait times for results, and experts worry it could happen again if millions of flu patients are thrown into the mix. “Right now, we have a well-publicized constraint to testing capacity in the nation. So if we have a very heavy flu season, that'll just exacerbate that problem,” Sifri says.

"Powerful weapons,” such as masks, physical distancing and the flu vaccine, can help relieve stress on the testing system, Redfield says. The CDC is also developing a single test that can differentiate between flu and COVID-19 and is distributing it to health departments around the country. Rapid coronavirus tests that help doctors quickly determine whether a patient has COVID-19 are also gaining traction.

Over 45 percent of adults in the U.S. received flu shots during the 2018-2019 season. The CDC's Redfield wants to see that number closer to 65 percent this year, and says older adults play an important role in making sure younger populations — their children and grandchildren — get vaccinated. The flu shot is recommended for people 6 months and older, with rare exceptions.

"We really do need the grandparents in this nation to help reinforce in their children the important medical advancements of vaccination,” Redfield says, adding that the U.S. has ramped up production of the flu shot to about 190 million doses to account for more people seeking protection this year. The CDC usually purchases about 500,000 doses for uninsured adults; this year, the agency ordered 9.3 million.

"Just minor changes in the acceptance of this vaccine can make huge differences in the clinical burden that we have,” Redfield says.

Where's the best place to get a flu shot? Doctors’ offices, pharmacies, supermarkets and health departments will offer them this year. Americans who typically receive their vaccine at work may need to make arrangements to get it elsewhere; VaccineFinder.org can help you locate a safe and convenient location. Just be sure to follow proper precautions when venturing into public, the CDC warns: Wear a mask, wash your hands often and avoid close contact with others.