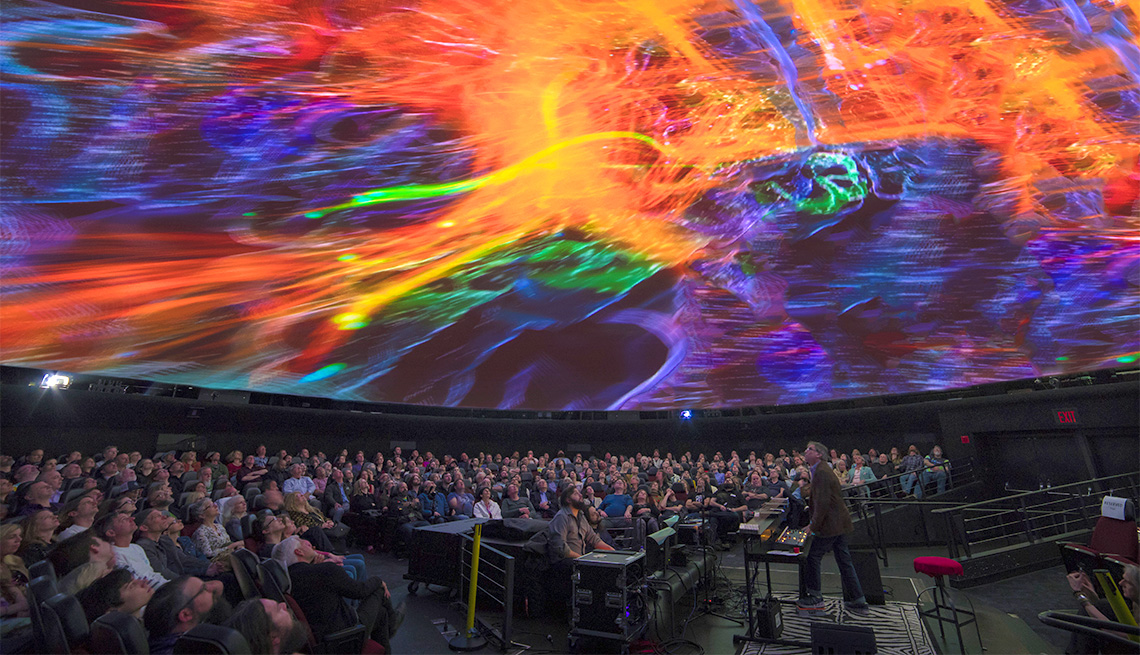 This is Grateful Dead Drummer Mickey Hart's brain on ... music.

This message boots up every morning on Mickey Hart’s computer screen. But it’s not like the guy needs a reminder. Hart, the longtime drummer for the Grateful Dead, has made rhythm and its many applications his lifelong business. At 74, Hart — who still wears size 32 Levi’s — has not only stayed young by playing percussion, he has spent the last many years exploring how it may help prevent the aging of the human brain.

“Rhythm is connection,” he says. “It’s everything. It’s life”

Just how connected is easy to see once you’ve had a look at the inside of Hart’s brain. During a recent series of performances of his multimedia presentation at New York's American Museum of Natural History, the pulsating image of Hart’s cranium spanned the huge dome of Hayden Planetarium, illustrating how different parts of his sensory system light up and vibrate when exposed to various musical stimuli.

Hart’s demonstrations are entertainment for sure. But his message runs deeper: rhythm and vibration heal the brain. Dementia, he says, is the “loss of rhythm.” And he, along with notables who collaborated on the event — University of California at San Francisco neuroscientist Adam Gazzaley and opera singer Renée Fleming (who lent her soprano to the event’s musical track) — are all at work searching for pathways that can bypass obstacles to function and cognition. Hart has also worked with Dr. Connie Tomaino, who runs the Institute for Music and Neurologic Function, on music as a therapeutic tool for brain function.

Gazzaley is currently conducting clinical trials with healthy older adults to show how a regular regimen of digital rhythm can enhance attention and memory in people with cognitive impairment. Hart has been working with Gazzaley on what will be a downloadable app, their goal to develop a game that challenges one’s rhythmic ability, with the hope of building new neuropathways in the brain. “What we’re talking about here is a deeper and longer immersive experience which can actually harness the brain’s plasticity to change the way it functions,” says Gazzaley.

Taking up an instrument as a child, and playing through adulthood is one proven way to protect one’s brain. But learning later in life is helpful, too. Hart shares the story of his unlikely best friend, Walter Cronkite, who was 73 when he became a Deadhead, and also started playing the drums. In July of 2009, as Cronkite lay dying from complications of cerebrovascular disease, Hart handed him a hand drum. “He could no longer speak, but he could play,” Hart says, tears in his eyes. “He used to ask, ‘When we do we know we have found our groove?’ Well, he found it.”