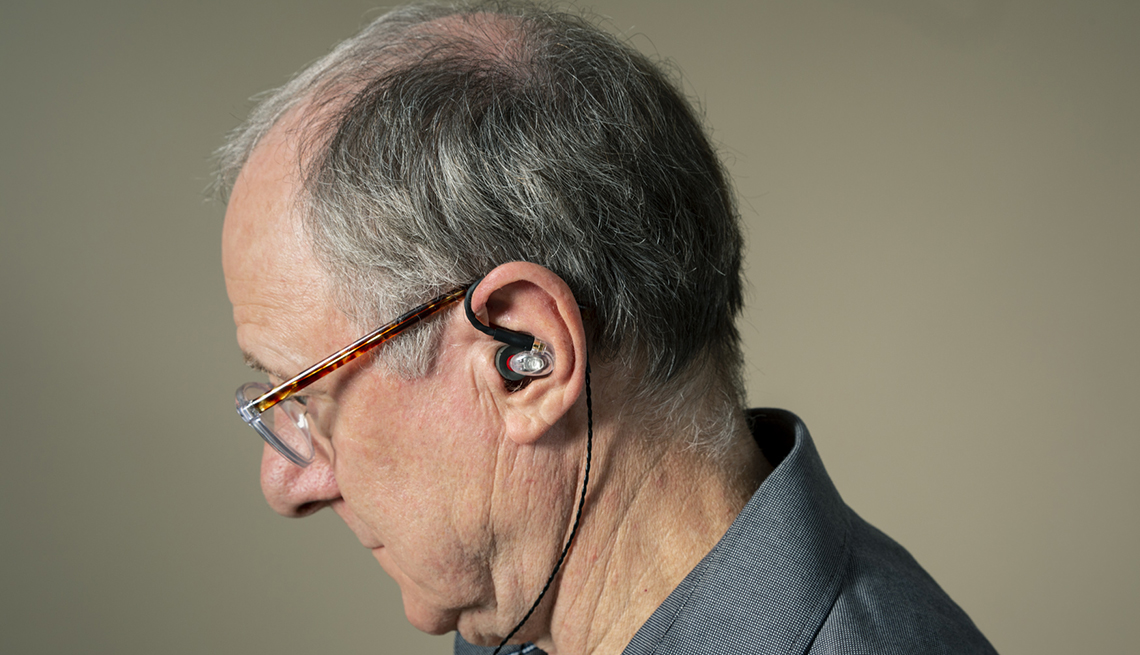 A sound-therapy system helps Nick Stein deal with his tinnitus.

En español | LIKE SNOWFLAKES or fingerprints, the phantom noises that are heard by the 50 million American adults with tinnitus are unique. Some sufferers are tortured by constant buzzing; others, by hissing or ringing. For Los Angeles independent TV producer Nick Stein, 65, it’s a monotonous, high-pitched whistle that started after a night working in the studio in 2005. “When it’s really loud, it’s really horrible,” he says.

Stein’s mindfulness meditation practice helped him keep his severe tinnitus in perspective, but it wasn’t enough for him. In 2017, he began using a sound-therapy system that pipes the same high-pitched squealing tone he hears all day into his ears at night, via earbuds that he wears while he sleeps.

“Doubling the sound seems crazy, but the brain is plastic — it slowly becomes habituated so you notice the sound less and less,” Stein notes. “After three months my tinnitus receded into the background. I go back to the system periodically to stay habituated. It really helps.”

Stein used a device called the Levo System, which is adjusted before first use to play a tone that closely matches the pitch and texture of a tinnitus sufferer’s unique phantom sound. “I worked with my audiologist so the sound mimicked my tinnitus exactly,” Stein says. Research shows that this type of sound therapy helps people react less to their tinnitus and can even make the problematic noise fade into the background.

Tinnitus most often results from damage to sound-sensing hairs in the inner ear, which can be caused by sudden or chronic noise exposure or simply by aging. (Some medications, such as painkillers and antibiotics, can also cause tinnitus, although the noises usually stop once the medication is discontinued.) Nerves connected to the hairs go rogue, transmitting a nonexistent sound to the brain, similar to phantom limb syndrome.

Habituation therapies help train the brain to pay less attention to the false signals generated by the ear, explains Stein’s otolaryngologist, Yu-Tung Wong, of Cedars-Sinai Medical Center in Los Angeles. “What you’re trying to do with most tinnitus treatments is to make the sound more tolerable,” Wong recently told CBS News. “It’s very difficult to say that you’re going to make the sound disappear completely.”

Meditation and cognitive behavioral therapy are still the primary options against this as-yet-uncurable condition, according to the American Academy of Otolaryngology. Stein, who produced the series Border Wars for National Geographic and teaches mindfulness meditation to law enforcement officers, says he feels less irritable and more able to focus now that he combines his traditional therapy with occasional Levo treatments.

“Stress and disruptions in my daily routine — like when I travel — seem to make the tinnitus louder again,” he adds. “So I’ll put my earbuds back in for a couple of nights.”

For the visually impaired, everyday tasks such as reading, shopping and socializing just got easier. The OrCam MyEye 2 is a device that clips onto the arm of your eyeglasses; a tiny camera recognizes faces, written words, colors and even cash and transmits the information to a speaker on the unit, which quietly tells you what you’re looking at. Just point your finger and it goes to work.

The 4 million Americans who undergo cataract surgery each year require multiple daily eye drops for up to six weeks after surgery in order to prevent infection and inflammation. But starting in early 2019, surgeons will be able to inject a new FDA-approved drop-free alternative called Dexycu during the procedure, providing long-lasting inflammation protection and cutting out weeks of eye drops.

Several biotechs are working on drugs to restore lost hearing. Frequency Therapeutics is conducting a Phase II clinical trial this year of a drug called FX-322, which “wakes up” a type of stem cell that can repair damaged hair cells in the inner ear. Another therapy, which is still in animal studies, would reestablish synapse connections and functional hearing (allowing for more speech clarity).

On the Horizon: Hearing Loss Prevention

"Noise exposures that create temporary problems — such as diminished hearing or ringing in your ears for a few hours afterward — can cause subthreshold damage to the inner ear. Even though hearing levels seem to return to normal, the damage is permanent, so later in life you may have more difficulty distinguishing sounds. Carry ear protection when you’re going out to a concert or sports event, or even the movies."