When Heartburn Is Linked to Cancer

Acid reflux may be tied to spike in lethal esophageal adenocarcinoma 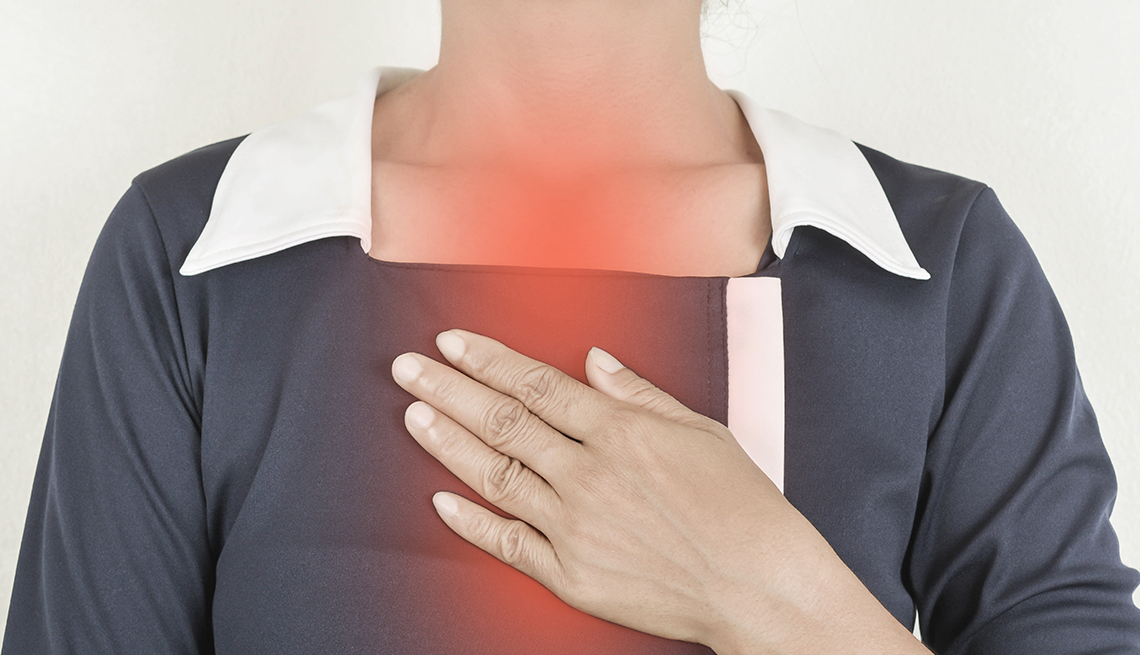 Many people don’t realize that common heartburn symptoms can both lead to and mask something more serious.
Getty Images
By:
Stephen Perrine
AARP
Published Jun 15, 2018

One out of 5 Americans experience heartburn or acid reflux on a weekly basis; 40 percent of us deal with it at least once a month. In many cases, we just blame the hot sauce and take an over-the-counter medicine to remedy it. Perhaps it’s time to think differently.

Esophageal adenocarcinoma — cancer of the lining of the soft tube that delivers food and drink from the mouth to the stomach — has increased sevenfold since the early 1970s, says Paul Oberstein, director of the gastrointestinal medical oncology program at NYU Langone’s Perlmutter Cancer Center in Manhattan. The American Cancer Society estimates that 15,850 Americans will die of esophageal cancer this year. Eighty-five percent of esophageal cancers are found in people 55 and older; roughly four times as many men get the disease as women.

“It’s one of the fastest-growing issues we have in our population,” says David Odell, assistant professor at Northwestern University Feinberg School of Medicine, thoracic surgeon at Northwestern Memorial Hospital and lead investigator on a study of esophageal cancer funded by the American Cancer Society.

The cancer’s increase has paralleled the rise of gastroesophageal reflux disease (GERD), the medical name for when you have bouts of acid reflux two or more times per week. GERD has several causes, led by obesity, a tendency toward large meals and a high-stress lifestyle. But many people don’t realize that common heartburn symptoms can both lead to and mask something more serious.

Chronic heartburn can sometimes lead to a disorder called Barrett’s esophagus, in which the cells of the esophagus, normally squamous cells like those of your skin, begin to change into glandular cells like those of the stomach. “When it’s exposed to stomach acid, the esophagus tries to make itself look more like the stomach,” Odell explains. “Five percent of GERD patients will develop Barrett’s, and 10 percent of those will go on to develop cancer.”

Unfortunately, it’s easy to mistake signs of cancer for simple heartburn. That’s exactly what happened to Ellen Tauscher, 66. Her job may have been more stressful than most: Tauscher was an undersecretary of state in the Obama administration. In 2010, during a particularly stressful time of her life (she was in Geneva, negotiating an arms control treaty with Russia), she began to experience classic symptoms of acid reflux. “I had a pain in my chest after most meals and had difficulty swallowing,” she explains. “I wasn’t sure what I was experiencing. A moment went by, and the tight feeling began to ease. I chalked it up to stress and left it at that.”

But over the next five months, her symptoms increased in both frequency and severity. At times, they rendered eating impossible. When she called her primary physician, he concluded that her symptoms were unusual and asked her to come in the next day.

“If my doctor had told me that day what many patients are told when they first complain of reflux symptoms — take Prilosec for six weeks and see if the symptoms abate — I’d be dead today,” Tauscher says. Instead, he ordered an endoscopy, a procedure in which a thin tube with a light and camera at the end is fed into your digestive tract so the doctor can inspect it. The test revealed that Tauscher’s symptoms were caused by a three-inch-long tumor that had grown nearly three-quarters of the way around the inside of her esophagus.

One reason Tauscher’s cancer was diagnosed so quickly was that she didn’t have a history of GERD. Chronic reflux sufferers aren’t likely to get such immediate care, which is part of the reason esophageal cancer has a five-year survival rate of less than 20 percent. That’s something Oberstein wants to change.

“If someone has heartburn that is not controlled by medication or simple measures like not laying down after eating, it’s critical that they follow up with their doctor or a gastroenterologist,” he says. Your doctor may recommend an endoscopy to see if you have signs of esophageal issues.

Bottom line, says Odell: “If you have reflux, discuss it with your physician to make sure there’s nothing else going on. And if you have difficulty swallowing, see your doctor immediately; it could be the first sign of a tumor.”

Shifting to a healthier diet can reverse GERD and reduce esophageal cancer risk. Focus your eating on:

Some signs may surprise you