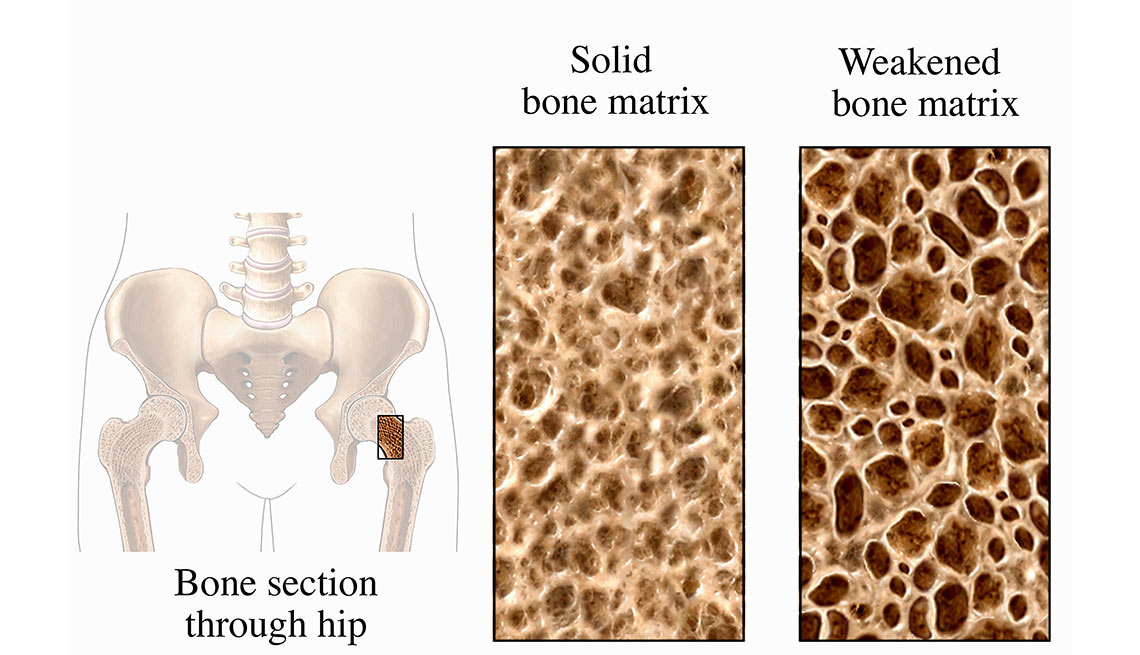 Our study suggests that few women are being evaluated or treated for osteoporosis following a hip fracture.

En español | Approximately 1 in 2 women older than 50 will fracture a bone because of osteoporosis, yet few older women who suffer a hip fracture receive the recommended follow-up of bone density testing or bone-strengthening drugs, a new AARP Public Policy Institute (PPI) study finds.

Based on an analysis of national health insurance claims of nearly 8,000 women 50 and older, fewer than 1 in 5 who break their hip receive either the testing or the drugs, researchers found.

“Our study suggests that surprisingly few women are being evaluated or treated for osteoporosis following a hip fracture and are vulnerable to potentially preventable future bone fractures,” said Lina Walker, PPI vice president for health security.

Those age 80-plus were the least likely to receive either of these recommended services, despite being at the greatest risk for a second fracture. The result of this undertreatment was dramatic: Those who did not get the services were 62 percent more likely to have a second hip fracture, compared with those in their age group who did receive the services.

“This is the important take-home message. The oldest women are the least likely to utilize services, but when they do, they derive the greatest and most immediate benefit,” said lead researcher Catherine Gillespie.

The study found that only 17 percent of women age 50+ underwent either bone density testing or started using osteoporosis drugs within six months of their hip fracture.

This echoes recent reports showing the use of drugs to prevent the thinning and weakening of bones due to osteoporosis has fallen by 50 percent due to fears of rare, but dangerous, side effects, according to the New York Times.

Even patients who have just broken a hip — which puts them at high risk for a second hip fracture — are refusing the drugs, the Times reported. In 2011, only 20 percent of patients discharged from a hospital with a broken hip were given a prescription for one of the drugs, compared with 50 percent in 2002.

Three professional groups — the American Society for Bone and Mineral Research,  National Osteoporosis Foundation and National Bone Health Alliance — recently urged doctors to be more aggressive in treating patients at high risk, and for patients to be more aware of the need for treatment, the Times reported.

For women ages 50 to 79, the AARP study showed testing or bone-strengthening drugs seemed to make little difference in the risk of a second fracture, perhaps because “hip fractures in this age group are still relatively infrequent and, more importantly, we were only able to follow women for an average of 2.6 years” to check for a second fracture, Gillespie said.

Osteoporosis affects nearly 6 million women 50 and older in the U.S., with roughly half experiencing an osteoporosis-related bone fracture during their lifetime. Hip fractures, in particular, often lead to serious health implications: 10 to 20 percent of older adults will die in the year after a hip fracture, and only 40 percent will return to their prior level of independence.

For more information go to http://www.aarp.org/hipfracturestudy.