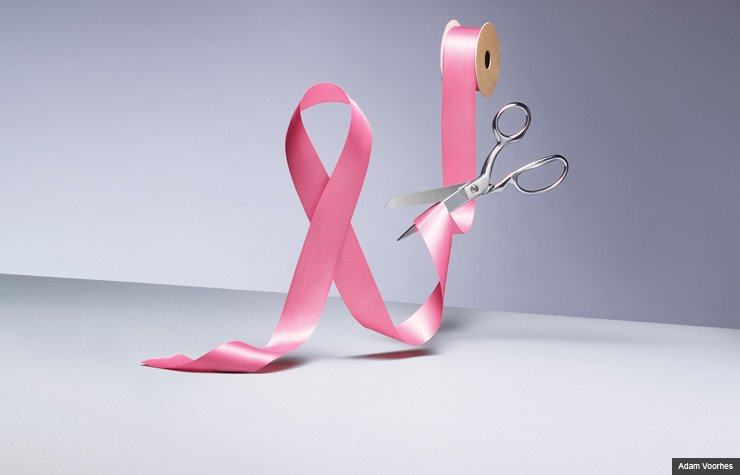 The pink ribbon has been a recognized symbol of breast cancer support and awareness since the early 1990s.

En español | Breast cancer is ubiquitous — and scary. The odds of a woman in the United States developing breast cancer in her lifetime are 1 in 8, according to the American Cancer Society.

But how much do you really know about the disease's risk factors, treatments, and prevention and detection methods? Here, we debunk eight common myths.

Myth 1: If you're at risk, there's not much you can do but watch for signs

Reality: There are some breast cancer risk factors that you have no control over, like your age and family history. But there are lifestyle habits you can embrace that can significantly reduce your odds, including getting more sleep, eating well, exercising regularly and maintaining a healthy weight. "Breast cancer risk is linked to increased levels of estrogen, and fat tissue produces excess amounts of it," says Joseph A. Sparano, M.D., associate chairman at the Department of Oncology at Montefiore Medical Center in the Bronx. (For more about reducing risk factors, see "Fight Back Against Breast Cancer.")

Myth 2: Most breast lumps are cancerous

Reality: "Although it's important for you to see a doctor as soon as possible if you find something unusual in one of your breasts, most breast lumps are not cancerous," says Debbie Saslow, director of breast and gynecologic cancer at the American Cancer Society. And it doesn't mean you have the disease if your doctor orders a biopsy, which is a procedure that typically involves inserting a thin, hollow needle connected to a syringe into a suspicious lump and removing fluid and tissue for further examination. In fact, according to the American Cancer Society, most biopsy results are benign. Still, the only way to know for sure is to remove and test tissue from the suspicious area.

Myth 3: Lumps are the only sign of breast cancer

Reality: Skin irritation or dimpling, nipple pain or having a nipple turn inward, swelling in the armpit, or any change in the size, contour, texture or temperature of the breast can also be a warning sign. A reddish, pitted surface like the skin of an orange could be a symptom of advanced breast cancer. Unusual discharge from the nipple that may be clear, bloody or another color is usually caused by benign conditions but could also be due to cancer.

Myth 4: Needle biopsies can disturb cancer cells and spread them to other parts of the body

Reality: Not true. Despite previous concerns, a 2004 analysis of more than 2,500 breast cancer patients from the Austrian Sentinel Node Biopsy Study Group in Vienna found no tumor cell spreading after a biopsy.

Reality: The National Cancer Institute reports there's no conclusive evidence linking the use of antiperspirants or deodorants and the development of breast cancer. Some studies have shown a possible association. For example, in a 2004 study, parabens — chemicals used as preservatives in some antiperspirants — were found in 18 of 20 breast tumor tissue samples. Still, the study didn't prove that parabens caused the tumors. Other research suggests that aluminum-based compounds that are applied frequently near the breast may be absorbed by the skin and cause estrogen-like effects. Breast cancer risk is linked to increased levels of estrogen.

The bottom line? The jury is still out. Women who are concerned can avoid using antiperspirants if they want, but it would be more useful to focus on addressing known risk factors such as weight gain and obesity, physical inactivity, alcoholic beverages and use of hormone therapy, advises Saslow.

Reality: According to the Susan G. Komen foundation, although there has been some debate, there is no scientific evidence to show that having either saline or silicone breast implants increases a woman's cancer risk. In fact, an analysis that combined the results from 10 studies found no increase in breast cancer risk among women with breast implants. Standard mammograms don't always work as well on these women, however, so additional X-rays are sometimes necessary.

Reality: When evaluating family history, the male side definitely counts. A history of breast cancer in a close male relative (father, brother or uncle) can boost your risk. A history of prostate cancer in one or more immediate relatives (father or brother) may also raise the odds, especially if the prostate cancer was found at a young age. Although the connection between a family history of prostate cancer and breast cancer is unknown, possibilities include shared lifestyle factors or gene mutations. New research also suggests obesity changes the genetic signature (which are genetic regulators of gene expression) in the father's sperm, and that this genetic information is then carried to his daughter's breast tissue before she’s born.

Reality: There is no scientific evidence to support this rumor. It was partly fueled by the self-published 1995 book Dressed to Kill, in which a husband-and-wife medical anthropology team claimed that women who wore tight-fitting bras had a greater chance of developing breast cancer than those who went lingerie-less. In fact, bras do not block the drainage of lymph fluid from the bottom of the breast, as the book claimed.

Holly St. Lifer is a freelance health reporter and writer.