Every time Jim McClure thinks of a job that people who stutter can't do, he meets a stutterer who's doing it well.

They are doctors, lawyers, schoolteachers, college professors and military officers. "We're a very diverse bunch. No two of us stutter the same. Most of us tend to stutter more on our names," says McClure, 67, a former Navy captain who lives in Albuquerque, N.M., and is media relations director for the National Stuttering Association.

With expert speech therapy, people who stutter can overcome their challenges. And like King George VI, in The King's Speech — winner of four Academy Awards including best motion picture — they can reach their full potential.

The film has inspired people to seek help even if therapy did little for them in the past, says Jane Fraser, president of the Stuttering Foundation of America, which provides free online resources to those who stutter and training programs for professionals.

Early intervention for preschoolers often prevents stuttering from becoming chronic. But for adults, the impact of stuttering on their lives and careers can be profound. About 3 million Americans and 1 percent of adults worldwide stutter. Roughly three to four times more men than women are affected.

The science of stuttering

New findings, published last year in the New England Journal of Medicine, describe how stuttering may be inherited. A study led by scientists at the National Institute on Deafness and Other Communication Disorders identified three genes as a potential source of stuttering. 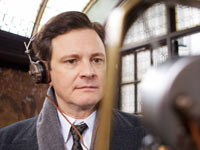 "This really points to sort of an underlying biological cause," says Dennis Drayna, a geneticist involved in the research. Emotional factors such as anxiety and nervousness compound the problem but are not at its root.

Therapy for adults aims to manage this anxiety while focusing on articulation, phrasing and rate of speech. "People of all ages benefit from good therapy," says Nan Bernstein Ratner, chair of the University of Maryland's Department of Hearing and Speech Sciences.

Speech therapists also teach stuttering modification, which is similar to training drivers how to maneuver during skids on ice. "Instinctively, people start to struggle and fight," Ratner explains. "They yank the wheel the wrong way." Expert therapy guides them in steering their way gently through stuttering moments.

Melodic intonation therapy can be effective as well. It uses singing to develop speaking in stroke patients, and it may benefit some stutterers, observes J.M. Balakrishnan, a speech therapist near Berkeley, Calif., and author of Yoga for Stuttering: Unifying the Voice, Breath, Mind and Body to Achieve Fluent Speech. Neurological research shows that one part of the brain controls singing while another area regulates speaking. Producing long, melodic tones helps reconnect the two. "People who stutter don't stutter when they sing," she says.

Strategies that aid one person may not work for another. Elliot Dennis, 68, a former Eastman Kodak field representative who lives in East Norriton, Pa., had a breakthrough upon visiting a stuttering specialist in New York. To reduce tension on his vocal cords, Dennis let out a passive flow of air before uttering the first syllable of a phrase as if it were all he planned to say, and then moving on to the rest. He later joined Toastmasters to practice and build confidence. One time, Dennis adds, "I made a humorous speech about my heart attack." It won top honors in the district.

Humor also helps Lee Reeves, 61, a veterinarian in Plano, Texas. Despite successful treatment after his training, Reeves soon suffered a relapse. "The stuttering came back in spades," he recalls. "I had a very difficult time finding a speech pathologist who knew what to do with me." A researcher suggested starting a Dallas-area support group, just as he had done in college. By reaching out to help others who also stuttered, Reeves says, "I regrounded myself again."

Many adults who stutter had speech therapy in childhood and in their college years. When they consult with a therapist decades later, it's usually for a specific need, says Lisa Scott, director of clinical education at Florida State University. In 2009, a 58-year-old man sought her guidance for giving a toast. "He was really worried that he was going to embarrass his daughter" at her wedding.

A current client has a different hurdle to overcome. The 49-year-old home improvement store manager has been asked to apply for a corporate position. But he declined repeatedly because the promotion would entail doing presentations. "He wants to get past this fear," Scott says, "because he sees how it's holding him back."

In a desensitization process, Scott exposes the man to speaking with strangers around campus and in a shopping mall. Soon he will deliver a five-minute speech about his hobby — saltwater fishing — to three or four of her graduate students and answer questions. The audience will increase for subsequent and longer talks, which will include PowerPoint displays. "With every speech," Scott explains, "we want to get a little bit closer to simulating an actual presentation that he might give for work."

Mary Weadon has made enormous strides in group therapy. "I still stutter, but many people would not even notice it now," says Weadon, 61, of Herndon, Va., a retired special education teacher. "My feelings about stuttering are like small ripples rather than frightening waves."

Her speech therapist instructed the group to counter the shame that burdens many stutterers by advertising their disorder. Weadon decided to order a license plate with "MMMMARY." She displayed it on her car for more than 10 years. More recently, she adds that "in the lobby where The King's Speech was playing, I found myself wishing I was wearing a big button that said, 'I Stutter, Too.' "

Susan Kreimer is a writer in New York and a frequent contributor to the Bulletin.