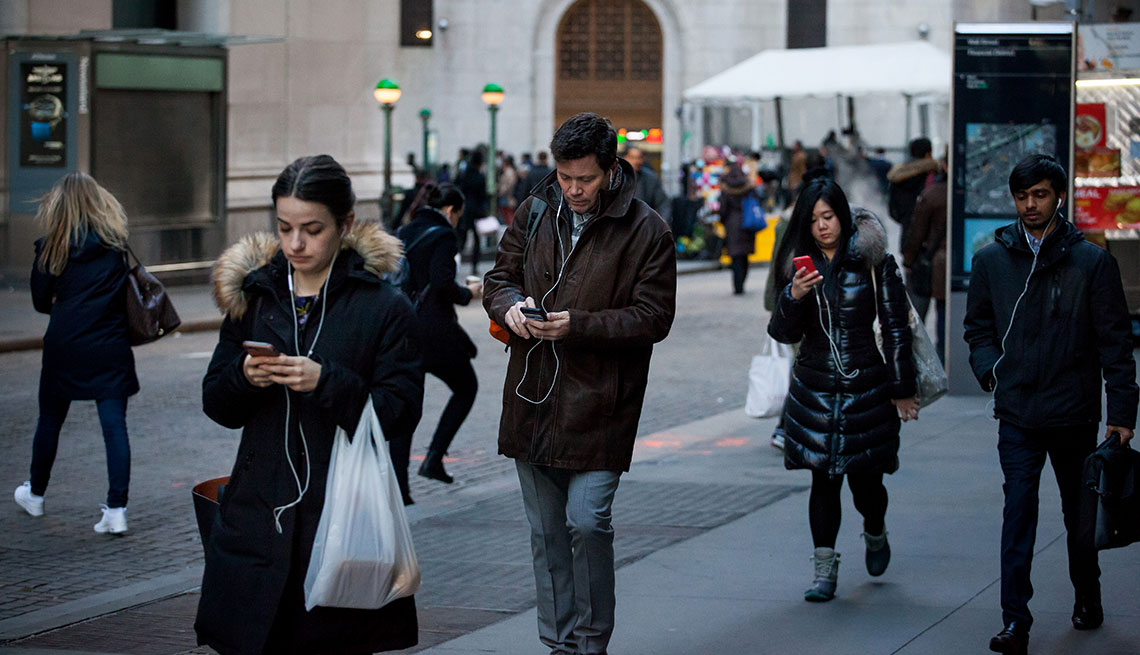 Americans, on average, touch their phones an astounding 2,617 times a day, according to research.
Getty Images
By:
Ken Budd
AARP
November 27, 2017

Yes, your suspicions have been confirmed by science: A growing fixation on video screens large and small, and the constantly changing images and messages these screens provide, may be altering how our brains work. New research is showing that younger brains can process information faster than previous generations, and so they can transition from task to task more easily. And people who grew up in this modern tech era may be even better conditioned for the constant switching. But this research also is revealing a key counter-theme: Older adults may be mentally superior in their ability to focus and learn due to a more resilient and long-lasting attention span.

“I think we’re entering an era where different people of different ages have very different brains,” says Tim Wu, a professor at Columbia Law School and author of The Attention Merchants, about the industry of capturing and selling human attention. “That’s the new generation gap. And some of the advantage goes to older people.”

The prime culprit in hijacking attention spans is the smartphone. Americans, on average, touch their phones an astounding 2,617 times a day, according to market researcher Dscout. Checking phones has become so prevalent that more than 40 percent of consumers said they look at the devices within five minutes of waking up, according to a 2016 survey by Deloitte. Fifty percent said they check them in the middle of the night.

Beyond phones, video screens seem to be inescapable. They’re in our living rooms (TVs) and on our desktops (computers); they’re in taxicabs and elevators; they’re in waiting rooms and stores — even on gas station pumps. And they’re in our hands constantly.

“The brain starts learning how to switch rapidly from one task to another to another,” says William Klemm, senior professor of neuroscience at Texas A&M University and author of Teach Your Kids How to Learn. “It becomes a habit. But this habit conflicts with focused attentiveness.” In a study at Boston College, people in a room with a TV and a computer switched their eyes back and forth every 14 seconds — 120 times in 27.5 minutes. 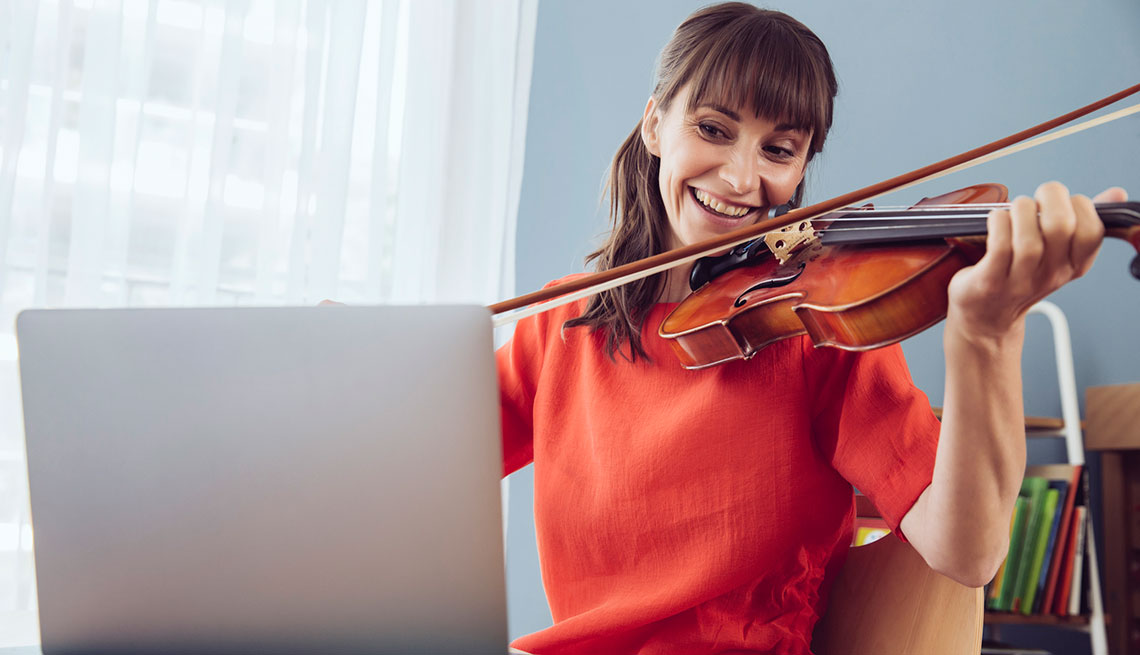 Focusing on a single complex task, such as playing an instrument, improves your ability to focus on other tasks.
Getty Images

As distraction becomes the norm, we start to crave it when it doesn’t exist, which is why so many people check their phone screens even as they walk down the street. In one experiment, 94 percent of Chicago pedestrians using cellphones didn’t see cash hanging from a tree. Just the presence of smartphones — even when they aren’t actively being used — can affect our cognitive performance. When participants in a study at Hokkaido University in Japan performed a task on a computer, those with a phone nearby performed more slowly than those who had a memo pad. Similarly, a single notification on your phone weakens your ability to focus on a task, researchers at Florida State University found. Those notifications may be short, but “they can prompt task-irrelevant thoughts, or mind wandering,” the researchers wrote.

The inability to unplug also creates anxiety. People who continually check their phones report higher stress levels than those who do it less frequently, an American Psychological Association survey reports. Stress, in turn, hurts our ability to concentrate, says Adam Gazzaley, a neurology professor at the University of California, San Francisco, and coauthor of The Distracted Mind.

Because they didn’t grow up with smartphones, older Americans may be better equipped for serious thinking, Wu says. “They are often better trained to be patient with complex tasks,” he says. “They can stand being bored for more than a second. I think the generation that is most at risk are the millennials, who have zero tolerance for boredom.”

This potential advantage in focus can help not only with accomplishing a task but also with learning new things. There’s a certain amount of boredom that comes with learning, and younger workers may have greater difficulty devoting their energies to tedious tasks, says Harvard professor Joe DeGutis, coauthor of a study on sustained attention.

“Individuals in their 50s and 60s are quite adept at motivating themselves to stay focused,” DeGutis says. “This motivated attention can result in — compared with younger adults — less mind wandering.” Another way of looking at it: “We see the merits of sticking with a task until completion,” says Patty Ceglio, HR strategist for CoolWorks, a site that connects many older workers with seasonal jobs.

Bob McCann sees this dynamic play out in his job restoring furniture at Iron Gate Antiques in Bluemont, Va. “Sometimes I’ll work for five hours nonstop,” he says. He attributes his ability to concentrate in part to a 26-year career in the Marines. “One of the first things they teach you is attention to detail.”

“I get a lot of emails, so I will take breaks and check on it, rather than have it beeping and chirping at me every 10 or 15 minutes,” he says. Those distractions, he’s found, affect younger workers more than older workers. “The young kids that I’ve worked with have got the attention span of an ant,” says McCann, who also has worked as an executive at a technology company. “They can’t focus because they’re jumping between things. You can’t be successful if your nose is stuck in your phone all day.”

This doesn’t mean that older adults have all the mental advantages. The processing speed of our brains starts to decline at an early age — around 24, according to a study at Simon Fraser University in British Columbia. And with processing decline comes a diminishing ability to switch from one task to another or manage interruptions. Older adults also struggle to filter out irrelevant information, Gazzaley says, which is why conversations are often challenging in a busy restaurant. But while distractions may be difficult on the brain, focused activity — whether it’s working, gardening, volunteering or going to the gym — can have the opposite effect. In a study by researchers at the University of Texas and the University of Alabama, older adults who stayed busy outperformed their less occupied counterparts on cognitive tests.

Despite his job as a computer science professor at Georgetown University in Washington, D.C., Cal Newport lives a mostly analog life. He reads print newspapers. He turns off his computer at 5 p.m. and doesn’t have social media accounts. By blocking digital distractions, Newport has found time to write four books, earn his Ph.D., write numerous peer-reviewed academic papers and spend summer evenings listening to baseball games on the radio. “A life defined by fragmented attention,” he says, “can produce exhaustion and anxiety.”

That ability to perform deep work — focusing without distraction on a cognitively demanding task — will become an important job skill, Newport says. People also seem happier when performing deep work, he says — writing an important report or creating something with depth, as opposed to a task like answering emails.

“In my experience, people in their 50s and 60s often regain a deep-work ability faster than younger people,” he says. “The big difference is that if you’re older, you spent most of your life without the level of intense and constant distraction — something most young people have never experienced.”

But in the coming years, the demands on our attention spans will likely grow, as technology enters more of our lives, from virtual reality to smart appliances.

“I think the more you primarily consume tiny bits of information, the harder it gets to consume larger pieces of information,” says Wu, who attributes the problem to attention-hungry advertising models. “No one is making money when you’re playing with your grandchildren. The attention merchants want you clicking on pics of your grandkids, not spending time with your grandkids, because then they can advertise to it.”

Avoiding this distracted future — and saving your brain — ultimately starts with you. “It’s important to examine your life and ask, ‘Is this really what I want to do with my mind? And with my time? Will it all just get frittered away?’ ” Wu says. “If you want to take control of your life and your mind, this is where it starts.”

6 Ways to Regain Your Focus

1. Grab a good novel. In a study at Emory University in Atlanta, subjects read at night and underwent fMRI scans of their brain each morning. The scans showed increased connectivity in the part of the brain associated with language. Most interesting to researchers: The neural changes persisted for five days after participants finished the book.

2. Play an instrument. Or meditate. Or write without interruption for 30 minutes. “Focusing on a single complex task improves your ability to focus on other tasks,” says Harvard professor Joe DeGutis. “Making a habit of these activities can result in ‘attentional state training,’ where you are better able to get in a relaxed, focused state for other activities.”

3. Work in the morning. In a study by the Rotman Research Institute, participants ages 60 to 82 performed better on cognitive tasks and were more focused when tested in the morning than in the afternoon.

4. Learn a language. Research at the University of Birmingham in England found that bilingual speakers were better at maintaining focus and attention than monolinguals. Muy bien!

5. Chew gum. In a test involving the recall of random numbers, those who were chewing gum responded more quickly and accurately than those who were not, a study at Cardiff University in Wales found.

6. Volunteer. When older adults volunteered in the Baltimore Experience Corps, a program in which retirees serve as mentors for children, it not only stopped age-related shrinking of the brain, but some brains grew slightly in size, according to research from the Johns Hopkins Bloomberg School of Public Health in Baltimore.