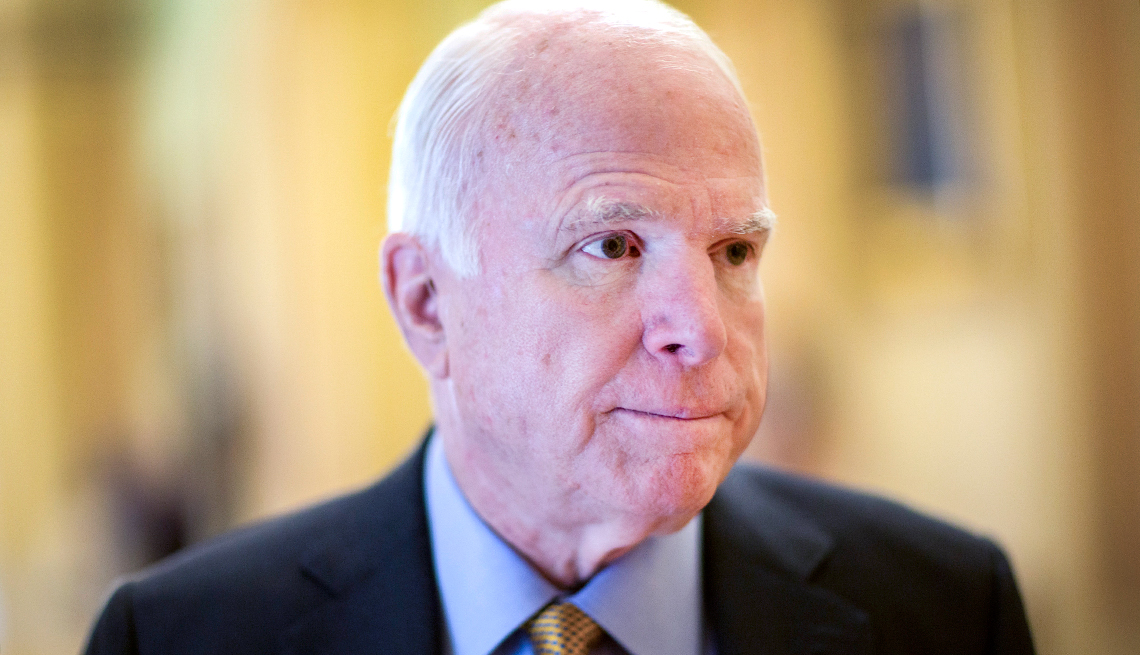 After being operated on to remove a blood clot above his left eye, Sen. John McCain, 80 (R-Ariz.), has been diagnosed with primary glioblastoma, an especially aggressive type of brain tumor. The tumor forms in the tissue of the brain and spinal cord, according to the American Brain Tumor Association (ABTA).

Glioblastoma represents 14.9 percent of all primary brain tumors and 55.4 percent of all gliomas, a general category of brain tumor. It also has the highest number of cases of all malignant tumors, with an estimated 12,390 new cases predicted in 2017. Peak incidences occur from ages 55 to 85 and are rare in people under 40, ABTA Chief Science Officer Nicole Willmarth tells AARP. They also tend to affect more men than women.

According to ABTA, the tumors arise from astrocytes, or the star-shaped cells that make up the supportive tissue of the brain. They reproduce quickly and are supported by a large network of blood vessels, making them highly cancerous.

Because glioblastomas can grow rapidly, the most common symptoms are usually caused by increased pressure in the brain. They can include headache, nausea, vomiting and drowsiness. Depending on the tumor's location, patients may develop a variety of other symptoms, such as weakness on one side of the body, memory and/or speech difficulties, and visual changes.

In McCain's case, the senator and former presidential candidate showed no neurological problems before or after the operation, his doctors told CNN. The clot was discovered during a routine physical exam. Blood clots, however, are not one of the most common symptoms at diagnosis, Willmarth says. McCain also reported feeling fatigued and having brain fog as well as intermittent double vision, which prompted a CT scan.

As with many tumor types, the exact cause of glioblastoma is not known. Treatment may combine several approaches because the tumors contain so many different types of cells. Certain therapies may work for some cells, but others may not be affected at all.

"The first step in treating glioblastoma is a procedure to make a diagnosis, relieve pressure on the brain, and safely remove as much tumor as possible through surgery," according to ABTA's website. "Because glioblastomas have finger-like tentacles, they are very difficult to completely remove. This is particularly true when they are growing near the parts of the brain that control important functions such as language and coordination."

Radiation and chemotherapy may be used to slow the growth of tumors that cannot be removed with surgery. Mayo Clinic doctors who are involved in McCain's care told CNN that a minimally invasive craniotomy was performed. Postsurgical brain scans show that the tissue causing concern has been completely removed, and the senator has shown no neurological problems. He would need to heal from his surgery before beginning radiation.

McCain's condition is the same one suffered by his former colleague Massachusetts Sen. Ted Kennedy, as well as film critic Gene Siskel. Both men died from complications related to the tumor. Median survival is about 15 months, and about 10 percent of patients may live five years or longer, Willmarth says. ABTA offers resources to help patients through their journey, including navigating second opinions, finding clinical trials and treatment options, and supporting caregivers and patients throughout their experience.