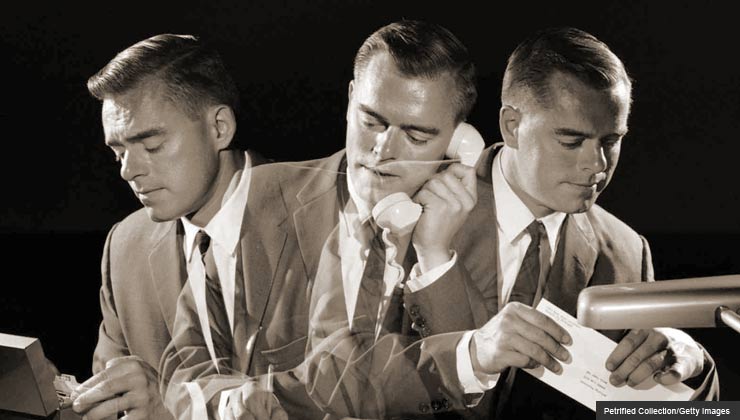 Warning: Don't let anyone interrupt you while you're reading this. Not if you're over 60 and want to remember it, anyway.

Older brains, it turns out, aren't wired to handle interruptions with ease.

That's one of the intriguing findings of a new study that examines how well the brains of different age groups remember and switch back and forth among short-term or working memories when multitasking.

Working memory holds information in the mind for brief intervals, an ability essential to mental functioning. The new research reveals that younger brains switch very quickly between two different neurological networks — one encodes short-term memory, while the other is activated when we need to pay attention to something new.

For older brains, the switch is harder.

The findings, published in the April 11 Proceedings of the National Academy of Sciences, have some important implications in a world where multitasking is seen as an essential skill.

Researchers at the University of California, San Francisco (UCSF) used sophisticated brain-imaging techniques to uncover why the brain responds differently to multitasking — or remembering to complete a task — after a distraction. And they found that something more fundamental than just memory is involved: The brains of aging adults are far less adept at switching between the two neural networks, one for memory and another for attention.

Using magnetic resonance imaging to track blood flow, researchers asked two groups — one whose average age was 24 and another whose ages averaged 69 — to briefly view a nature scene. When a face suddenly popped up, the subjects were asked to determine the age and gender of the face, and then asked to recall the original nature scene.

The brain scans showed that the memory-encoding networks of the younger group fired up again right after the unexpected distraction, quickly refocusing on the nature scene. The brains of the older adults proved more rigid, failing to disengage from the interruption and reestablish the neural connections needed to switch back to focusing on the original memory.

"This study provides the first understanding of the neural brain mechanisms responsible for multitasking and memory in older adults," says the study's senior author, Adam Gazzaley, M.D., director of the UCSF Neuroscience Imaging Center. The research also shows that working memory is very fragile, he says. "Over the course of seconds, one interruption erases memory quality."

The research provides a "biological window" into some of the "inefficiencies" of the aging brain, says Ronald C. Petersen, M.D., neurologist and director of the Mayo Clinic Alzheimer's Disease Research Center.

Work is already under way in Gazzaley's lab to develop brain-training software that might help older adults better cope with interruptions.

Loren Stein is a freelance writer who lives in Washington, D.C.

Multitasking, Memory And Your Brain