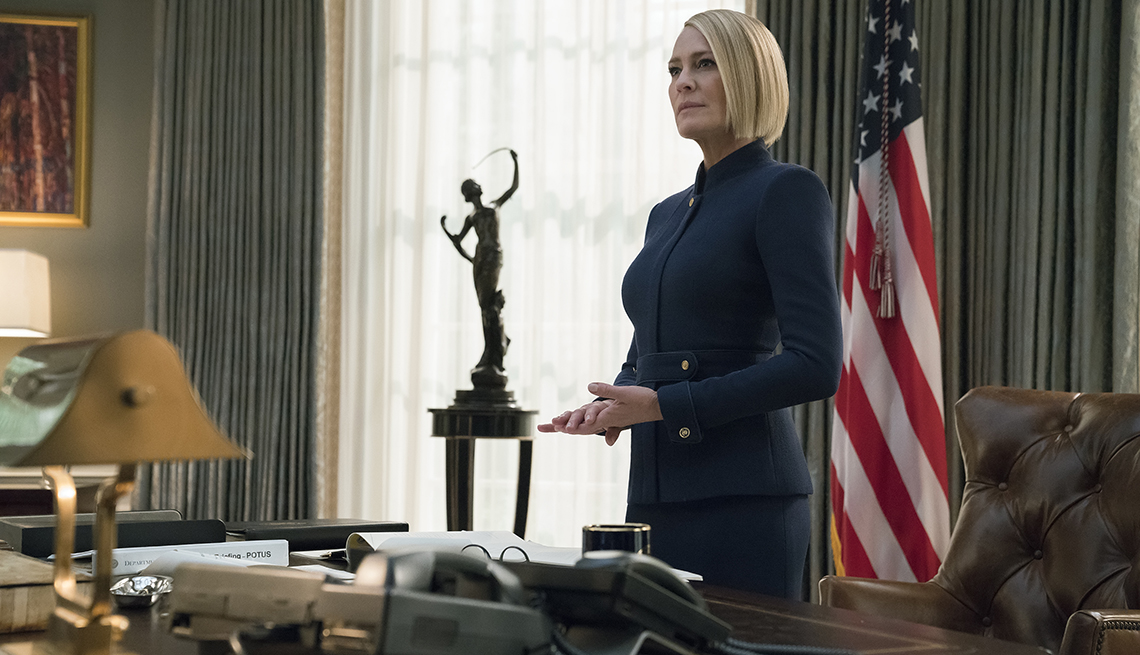 Taking over the Oval Office seems seamless at times for President Claire Underwood (Robin Wright) in Season 6 of “House of Cards.”

Who needs Kevin Spacey, whose career was torpedoed by sexual misconduct charges? Not House of Cards, and not Robin Wright, 52, who plays his widow, Claire, in Season 6, airing on Netflix starting Nov. 2. In the first episode, set 100 days after she took over the presidency from Spacey’s Francis Underwood character, she finds a bird trapped inside a wall at the White House, catches it, then — instead of crushing it with her bare hands as you’d expect Spacey’s character to do, while grinning straight at the audience and cackling evilly — President Claire Underwood lets it fly away, saying, “Francis, I’m done with you.”

Actually, she’s not quite done with him. Even though he’s died under suspicious circumstances, Spacey’s character still figures in the plot. Claire may even be implicated in his death, and also a murder Francis orchestrated, now being investigated by snoopy reporters. Francis’ loyal henchman Doug Stamper (Michael Kelly), who took a rap for his late boss, is now scheming against Claire, warning her, “Are you trying to erase him? Because you can’t.” She can’t trust her oily veep (Campbell Scott, 57), either. 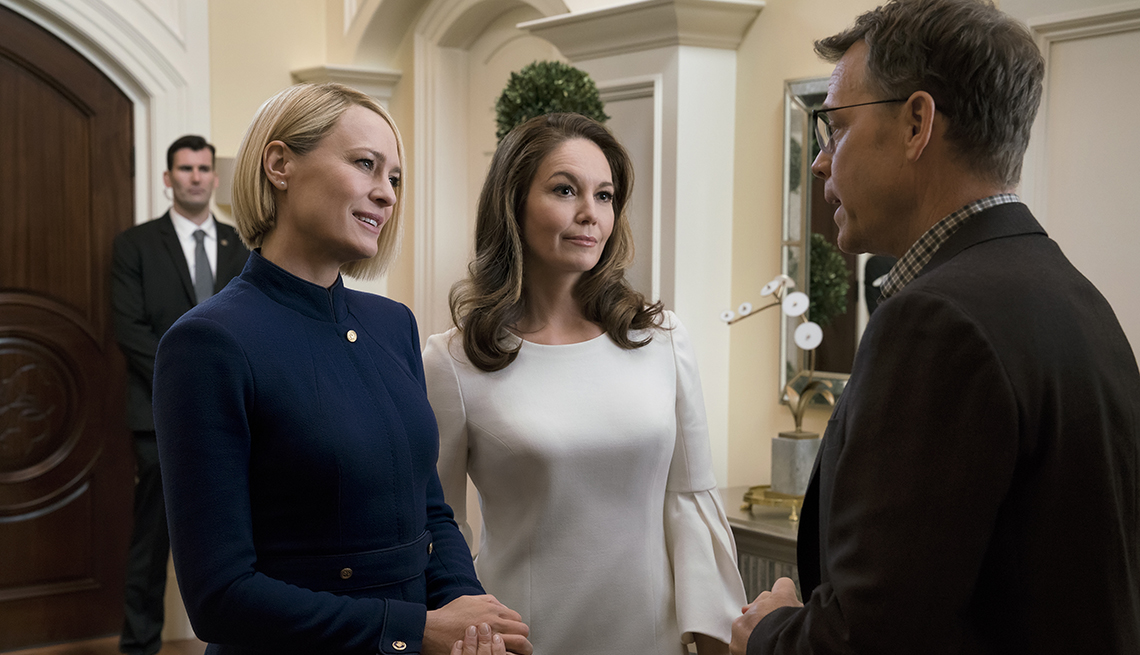 Robin Wright (left) is joined by Diane Lane and Greg Kinnear for the final season of “House of Cards.”

What’s worse, before he died, Francis cut a deal with a sister-and-brother team of malevolent zillionaire industrialists, Annette and Bill Shepherd (Diane Lane, 53, and Greg Kinnear, 55), who plan to force Claire to be their puppet. And this is wonderful, because Lane and Kinnear make much better foils for Wright than Spacey did in the last season, when the show’s shtick was getting stale and Spacey’s performance bloated. The Shepherds add a new flavor to the nasty political mix — they’re a bit like the plutocrat family in HBO’s Succession. Reviews of this, the final House of Cards season, are 20 percent more positive than last season’s.

Lane’s Annette character is an old schoolmate of Claire’s, and the best part of the revivified show is their ongoing duel of ruthless, extraordinarily well-dressed divas. In public, Annette and Claire are all smiles, but their body language is menacing, and under her breath, Annette hisses threats like, “Don’t ever recoil from me again!”

When they confront each other facing the mirror in a fancy restroom, they think about old school times: “The last time you dragged me into a bathroom it was to show off your hickey,” says Claire. “I’m nifty 50,” brags Annette, and then they turn combative. Their tense, hostile intimacy is a bit like Feud or Big Little Lies — a refreshing change from Spacey’s egomaniacal, spotlight-hogging male energy. And the venom is spread around. As Claire’s worldly, morally flexible, well-connected Deputy Undersecretary of Commerce Jane Davis, Patricia Clarkson, 58, speaks with a witty voice cold as dry ice: When there’s talk of killing a friend, Jane says, “I couldn’t live with myself.” But we think she maybe could, with that trademark Clarkson wry smile.

The whole power dynamic of House of Cards has shifted to the feminine, providing a jolt of fresh meanness. “The reign of the middle-aged man is over,” says Claire — but the reign of this middle-aged woman is not secure, death threats are up 400 percent since Francis’ administration, and assassins’ bullets may prove easier to dodge than the maneuvers of her duplicitous underlings and frenemies.

Will Claire turn sheep for the Shepherds? Will we find out where all the bodies are buried, and are more about to fall? Will her presidency survive Syrian strife, Russian conniving, a sinister computer app and her own scandalous secrets? All I can say is, House of Cards is worth watching again.