"Believe me, happiness is not ticking off Walter Cronkite," says comedian Billy Crystal.

En español | Doing my Broadway show 700 Sundays reminded me how much I love working in front of an audience. But I've had more than a few awkward moments involving audience members.

In the late 1960s I was working as an usher for the New York stage production of You're a Good Man, Charlie Brown. One night I spotted Walter Cronkite and his wife sitting in the front row.

I was so excited I rushed up to his seat, pointed my flashlight toward his face and said, "Mr. Cronkite, if there's anything I can do for you — anything at all — please, please don't hesitate to let me know and I'll personally take care of it for you."

He glared at me for a moment, then deadpanned, "Well, you could start by taking that f---ing flashlight out of my face."

I was devastated — this was America's Uncle Walter! I slunk to the back of the theater and hid there for the rest of Charlie Brown. Believe me, happiness is not ticking off Walter Cronkite. 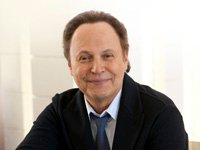 We miss him as: Oscar host

Next up: The Comedians (TV series), Which Witch? (film)

Twenty years later I was at some event, and there he was! My mind started racing: Should I say something? Would I look like an idiot? Was he still mad at me? Finally I summoned the courage to walk up to him and say, "You probably don't remember this, but … Charlie Brown … the usher with the flashlight. …"

Cronkite goes, "That was you? I've felt bad about that for years!"

Not as bad as I had felt, but suddenly, after all that time, it was all better.

That wasn't nearly as embarrassing as a misunderstanding that flustered me in the middle of a performance of 700 Sundays.

I was up there on stage doing my thing when I saw this blinking red light, like a video recorder, flashing away at the back of the theater. So during intermission I got hold of the theater staff and told them, "Get out there and stop that pirate!"

They came back a few minutes later and said, "Umm, that flashing red light is on a guy's electric wheelchair."

Being the humanitarian I am, I said, "Can you at least put some tape over it? That blinking light is distracting me!"

A little later they came back and said, "We can't do that either; the red light is linked to his vital signs, and it blinks to let his nurse know his heart is still beating."

So I decided to let it go. I'm expecting my Nobel Prize any day now.

Billy Crystal returns to television in a new FX series, The Comedians, at 10 p.m. on Thursday, April 9.