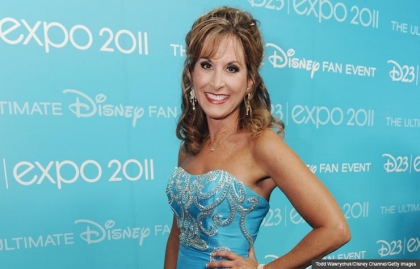 Jodi Benson voiced the role of Ariel in the animated classic "The Little Mermaid."

Jodi Benson doesn't need a fountain of youth. The actress-singer who brought Ariel to life in The Little Mermaid may be 52 and a married mother of two, but she still does voice work and concerts. And with the Oct. 1 release of the 3-D Blu-ray Diamond Edition of The Little Mermaid, Benson, as Ariel, will come to life for a new generation of young movie-watchers.

For those who fell in love with the sound of Benson's voice — both speaking and singing — in The Little Mermaid, she will always be the rebellious 16-year-old princess with the swishy tail and flowing locks who defies her sea-king father to join the human world above. But the 1989 film, its two home-entertainment sequels, a TV series and video games were not her only claims to fame.

Nominated for a Tony in the 1992 revival of George Gershwin's Crazy for You, the stage veteran has made a thriving career out of using her voice. The Little Mermaid, however, was her first plunge into the heard-but-not-seen side of showbiz.

"It was all new to me," says Benson, recalling how composer Alan Menken and lyricist-producer Howard Ashman — who wrote and directed the beauty-pageant musical Smile, in which she starred on Broadway in 1986 — approached Mermaid as if it were a stage production. "I was joined by other cast members in a read-through with Howard and Alan at the piano. Later on, we recorded by ourselves. I usually don't get to meet the other voice actors until the movie's premiere." 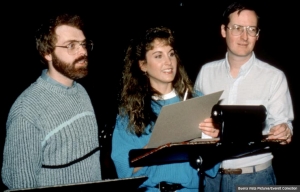 Jodi Benson, center, during a recording session for "The Little Mermaid."

After several years of sinking returns at Disney, The Little Mermaid put the Magic Kingdom back in the swim as a cartoon-feature powerhouse. Two years later, Beauty and the Beast became the first animated feature nominated for a best-picture Oscar. And 1994's The Lion King still rules the box-office jungle as the highest-grossing hand-drawn animated film ($423 million).

"The Little Mermaid changed my life," says Benson, who calls her relationship with the character "a wonderful blessing and a huge surprise. Every job opportunity I've had since then was thanks to that character and that film. I think God must have had something in mind for me that was not on my radar when I first started out in New York. Back then, doing animated voices meant your career was done — it was looked down upon."

Look who's not looking down now: A-list stars such as Johnny Depp (Rango) and Steve Carell (Despicable Me) routinely tackle animated speaking roles nowadays. Benson, however, earned a bonus for her work: a signature song, "Part of Your World," in which Ariel expresses her desire to experience life above sea level.

"Every time I sing it," says Benson, "the song comes to life for me. I want to show my concert audiences that it isn't just the same old, same old — I want it to be a truly magical moment."

She has also had the honor of speaking for a real doll — namely, Barbie — in Toy Story 2 and 3, as well as in the 2011 cartoon short Hawaiian Vacation.

"I was the original voice of Mattel's Barbie for an '80s claymation workout video," Benson explains. But director John Lasseter didn't know that when he approached her for Barbie's role in the 1999 sequel as a toy-store guide for Buzz Lightyear and the gang. In Toy Story 3 (2010), in which Barbie meets Ken and they share their passion for fashion, "I tried to make her vulnerable and not just plastic," says Benson. She has grown accustomed to her voice being recognized. "When I'm on the phone, people will often tell me, 'You sound a lot like Ariel.' "

Technology allows the former L.A. resident to record almost anywhere while living year-round in Georgia, where she home-schools her kids. Both, she reports, are into music and soccer.

Benson has no problem sharing her identity with an impetuous teenage mermaid. "It's a wonderful legacy," she says, "and with each re-release I get to introduce Ariel to a new generation."

Clockwise from left: Ariel, Sebastian and Flounder, stars of "The Little Mermaid."

We couldn't let voice artist Jodi Benson off the hook without asking her two burning questions about her ongoing ties to The Little Mermaid.

Q: Considering that Ariel's best friends are Sebastian the calypso crab and a skittish fish named Flounder, do you, um, eat seafood?

A: I do. We went to Maine recently and had our own little lobster festival. No oysters or mussels, but any kind of fish — we love salmon. And sushi! But I'm not a huge fan of crab.