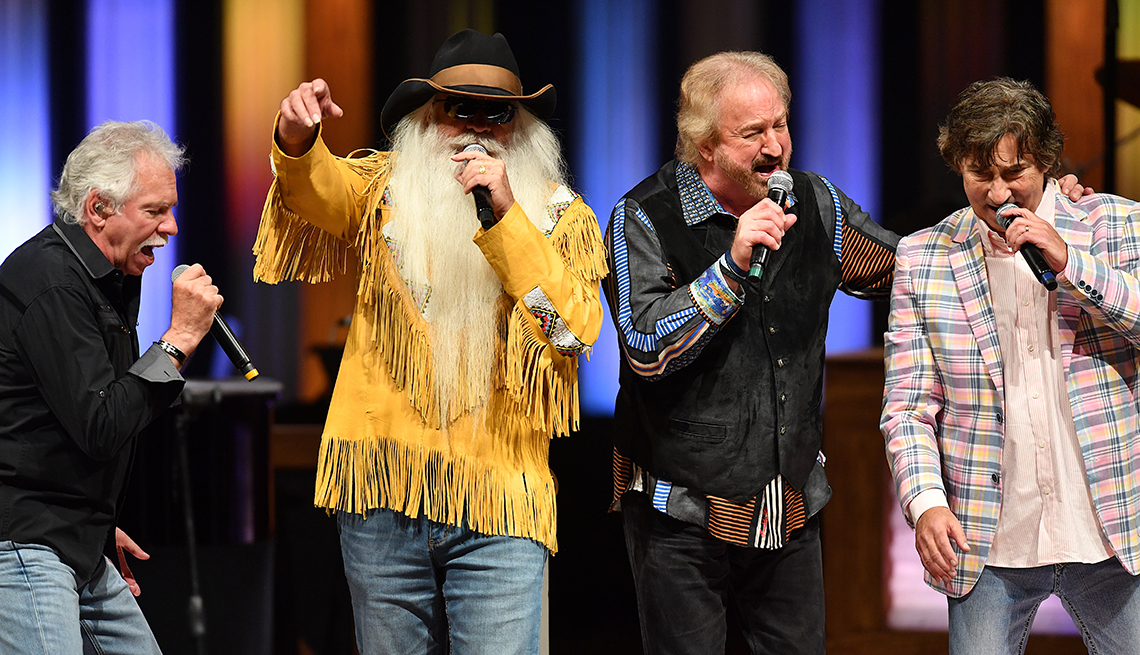 The Oak Ridge Boys haven't been boys for a very long time, but that isn't stopping the vocal quartet from soldiering on as one of country music's steadfast superpowers. Evolving from a Southern gospel group founded during World War II, the Oaks lineup gelled in 1973 with lead singer Duane Allen, tenor Joe Bonsall, baritone William Lee Golden and bass Richard Sterban. The foursome has sold more than 41 million records, racked up scores of awards and conquered the charts with hits like “Elvira,” “Bobbie Sue” and “American Made.”

All beyond age 70, some with grandchildren and great-grandchildren, the singers remain together, still devoted to creating music and performing. On a break during their current tour, Bonsall talked about the band's fraternal alliance, love of singing and new ElderFraud partnership with AARP and the Department of Justice. (The quartet also discussed their passion for fighting fraud on Rural America Live with AARP, on RFD-TV, which you can view on aarp.org.)

From our talk with Bonsall:

I'm the youngest and I'm almost 72. We're the hardest-working act in show business. We do about 150 dates a year not counting shows at the Grand Old Opry. We took a three-week break after a 31-day Christmas tour and we're back on the road. It goes on and on. We don't play the arenas like we used to. We play beautiful theaters, performing art centers, county fairs, country festivals, the big casinos. There's no stopping the Oak Ridge Boys. There's no quit in any of us.

Every man's on board, physically and psychologically

God's been good to us. It's not that we haven't had our aches and pains, but we've got good health. Everyone is forward thinking. It's never, “How do we slow it down?” Our thinking is, “How do we do it better?” It only takes one guy to say, “I'm done,” but we all love doing this. I can't imagine the Oak Ridge Boys not singing. We don't know how to do anything else.

Rigors of the road? Not when you're cruising in a customized Prevost bus

We have a big beautiful private bus. None of us have ever minded the road. The less flying we have to do, the better. If we can wake up when we want to wake up, that keeps us on an even keel.

Harmonious onstage and off

The four guys are so different from one another, but we have an amazing brotherly bond. So many great songs, so much water under so many bridges, it's all drawn us closer together. When we were younger, maybe a little ego and nonsense would get in the way. But I can't remember the last time there's been a dark word on the bus. Our feeling is, “Let's go sing.”

A new album is brewing

Right now we're in the planning stages with our great producer, Dave Cobb. We're talking about a front porch attitude — picking out songs we'd sing on the front porch. It's the same approach we used for our Christmas album, Down Home Christmas, songs you'd gather around the piano to sing. Dave will provide the direction as he always does. I love the creative process. I'm excited that next fall we'll be singing songs that right now we haven't even thought of.

Connecting with the audience

I believe we uplift people with a good, clean, wholesome American show. They're not going to hear anything embarrassing. We're going to wave the flag a little bit and sing some gospel. We're good at singing about love and positive vibes. We're not good at singing beer-drinking, divorce songs. Yes, our fans skew older. We've all skewed older. But they bring in new people. We've been passed down like an old shirt.

Music as therapy and escapism

I have spent my whole life in music and I've seen what it can do. Life can be difficult. It's a joy to be at a show for two hours, having fun and elbowing your neighbor and listening to four-part harmony with a big kicking band. You go through all the emotional pulls from “Leaving Louisiana in the Broad Daylight” to “Did I Make a Difference.”

I never get tired of any of our songs. Songs mark time and space like nothing else. When we sing “Elvira,” for me, it's 1981 again, with the Oak Ridge Boys going from a major country music act to a household name. “Elvira” is our biggest song, the one everyone wants to hear. Most audiences will stand, like it's the Hallelujah Chorus. How can you not gear up for that? I'll sing “Elvira” every night till the day I die and it won't bother me a bit.

The upside of downtime

We don't talk about retirement but we have learned over the years how to balance our time. I love to go sing and I love to get home. I have plenty of time to go to my farm and fish. It's a second residence, 150 acres on the Tennessee-Kentucky line. The nearest person is about 3½ miles away. It's not good if you have a heart attack, but it's great if you want to sit on the porch by yourself and pick banjo for coyotes.

Joining AARP and the DOJ to fight fraud

We jumped right in, and we're involved at a gut level. Fraud abuse is serious, period, but the elderly are especially vulnerable. They need to know about these scams. There is no fortune waiting for you in Africa. The Social Security Administration will never call and ask for your Social Security number. They know your number. If we can provide a little help along the way and make them aware of these things a little more, we're happy to do a good deed. Our country is flooded with elderly people. You're talking to one of them!

It's great to be an Oak Ridge Boy. I would like to keep singing, as long as we can do it at a high level. If we couldn't sing well, it would be an embarrassment. The Oak Ridge Boys have built a heck of a mountain one stone at a time. If it started to deteriorate, then it would be time to stop.