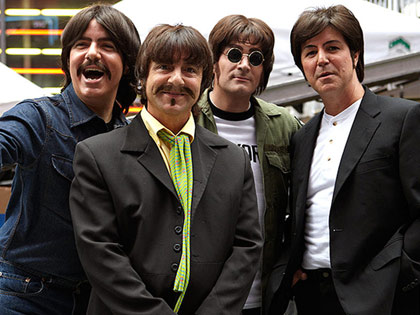 Rain performs as part of Broadway on Broadway to kick off the theater season in September.

America's live music scene is cacophonous with hundreds, maybe thousands, of tribute bands. On any given Saturday night, roadhouses, bars, nightclubs and concert halls echo with fervent recreations of bands ranging from the beloved to the notorious. They often carry names pregnant with insider significance to hardcore fans: The Rolling Stones tribute band Voodoo Tongue combines the Stones' album Voodoo Lounge with the group's glottic logo … The 4 Horsemen are instantly associated with the name of a classic Metallica song … and Another Brick borrows a snippet of lyric from Pink Floyd's The Wall. Here are four of the best: Bands that, in honoring the essence of their heroes, create a work of performance art that is also uniquely their own.

Unless your name is Paul McCartney or Ringo Starr, there's no way to even imagine being a Beatle. But on this particular overcast afternoon, on this open-air stage in the middle of Times Square and before some 40,000 singing, swaying, joyous onlookers, the guys who make up the Beatles tribute band Rain are coming as close as anyone.

"Hey, Jude … " begins McCartney double Joey Curatolo. And as he heads into the familiar piano riff that drives beneath the song's opening verse, a roar can be heard from as far as 46th Street.

Beat for backbeat, note for grace note, Rain has been honing its Beatlecraft for decades, ever since the group first emerged as a southern California bar band. Curatolo, Joe Bithorn (George Harrison), and Ralph Castelli (Ringo Starr) have been playing Beatles tunes together since the mid 1980s; Steve Landes (John Lennon) has been with them since 1998, and their musical director Mark Lewis — let's just call him the Fifth Beatle — is the guy who enlisted them all.

Rain — which takes its name from a lesser-known Beatles tune that appeared on the flip side of Paperback Writer — is pretty much the gold standard when it comes to tribute bands. The band plays to sold-out concert venues around the world, and its 12-week Broadway engagement — the one that had them performing in Times Square as part of New York City's annual Broadway on Broadway concert — runs through January 9.

The extended Broadway gig marks a level of accomplishment rare for most tribute bands, and a precious period of semi-stability for a group that's been on the road almost forever.

"I was born in Manhattan," says Bithorn (who proudly pulled out his AARP membership card). "This is a chance to visit my old stomping grounds." Unwinding at Chez Josephine, a 42nd Street restaurant, after the outdoor concert, Curatolo confesses he wasn't surprised by the crowd's enthusiastic response (when the band abruptly stopped playing) on the long final fadeout of "Hey Jude," the audience continued its sing-along chant, "Nanana Naaaa — Hey Jude!"

"Everyone is a Beatles fan," he says. "In our day and age, you must be. We're just celebrating right along with them. It was beautiful."

In the show, Rain traces the Beatles' career from their 1964 Ed Sullivan appearance to their final recorded track on Abbey Road. None of the band's show is pre-recorded. The early Beatles songs have surprising complexity that makes live performance tricky enough. But later, the Beatles labored for weeks on individual songs — layering vocal tracks, adding instruments and sound effects, and famously playing some elements backwards. They made up their sonic landscape as they went along, and Rain had to listen to the Beatles' records and reverse-engineer the sound from scratch.

"We depended on our ears as the manuscript," says Curatolo. "Nothing was ever written out by the Beatles. To be able to pick out the nuances vocally and musically is an art in itself." 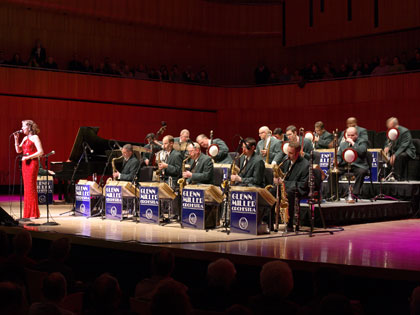 Julia Rich and the Glenn Miller Orchestra performing at the Holland Performing Arts Center in 2008.

No matter how old you are, the opening moments of Glenn Miller's "Moonlight Serenade" — the mellow saxophones, the muted trumpets — will conjure up indelible images: Maybe you remember embracing someone in a melancholy dance as a World War raged outside, or catching a glimpse of your parents getting misty-eyed to the tune over an evening cocktail, or pushing aside your Rolling Stones albums, setting that old Victor disc on the record player, and rediscovering the glorious sound of 20 or so musicians, brass instruments ablaze, playing as one.

We're cheating a bit by including the Glenn Miller Orchestra as a tribute band — it's owned by Glenn Miller Productions, and many of its original members back in the 1950s were Glenn Miller veterans. The present incarnation began touring about 12 years after Miller was lost over the English Channel in 1944, and a generation or two of Big Band boys and girls have been at it ever since, playing hundreds of gigs a year nationwide. Musical director Larry O’Brien pulls most of his arrangements right from the Glenn Miller archives in Florida, a direct link to the man who became an early 1940s superstar with numbers like “A String of Pearls," "Chattanooga Choo-Choo" and "In the Mood."

On this particular night at the Carlyle Club of Alexandria, Virginia, the audience is a wondrous mix of 80-ish couples shuffling dreamily on the dance floor to "A Handful of Stars," 70-somethings finding the legs to bounce along to "Little Brown Jug," Boomers singing along as they dance to "Elmer's Tune," and kids in their 20s hurling each other around to "Pennsylvania 6-5000."

And presiding above them, resplendent in his white jacket, stands O'Brien, coaxing from his musicians a sound as mind-blowing as any electric guitar solo or arena rock anthem.

"We use lips and lungs instead of electricity," says O'Brien. He's about to retire after nearly a quarter century as the band's director, but the Glenn Miller legacy continues to unfold. "It's amazing how much material there is in that library," he says. "We're still finding things that have never been played." 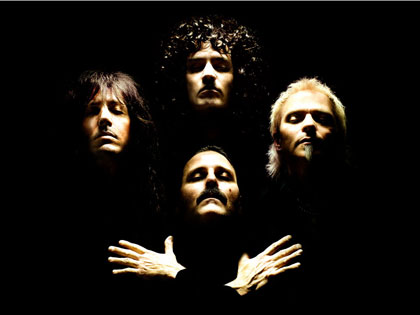 Almost Queen: Against All Odds

In a way, even Queen doesn't try to sound like Queen these days. Following the death of the band's legendary front man, Freddie Mercury in 1991, the group has performed infrequently, and then with guest singers who seldom attempt to approximate the soaring voice with which Mercury imprinted songs like "Bohemian Rhapsody," "We Are The Champions" and "Radio Ga Ga."

So imagine the audacity of Almost Queen, four middle-aged guys who against all odds do a mighty fine job of capturing the look and sound of the 1970s hit-makers (and if you thought the Beatles or Pink Floyd had the bestselling album of all time in the UK, you'd be mistaken). It helps that in the role of Freddie, Almost Queen has Joseph Russo, a Broadway theater veteran who's got Mercury's prancing, preening showmanship down pat — along with a close cousin to his glass-shattering voice. But the band itself, a collection of top-drawer musicians with extensive music industry résumés, has mastered Queen's complex instrumentals and tight-knit harmonies.

"There have only been about three or four serious Queen tribute bands in the past 15 years," says Randy Gregg, who plays Queen bassist John Deacon. "It's really intricate music, and a scary thing to try to cover. I think people shy away from attempting it. We've been together almost six years, and in the past year we've really, really homed in on it."

While the surviving Queen members have never officially weighed in on Almost Queen's version of their body of work, there has been at least one subtle endorsement from the celebrated band's lead guitarist, Brian May.

"If you go to brianmay.com and type in 'Almost Queen,' our dates come up," says Gregg. "He's all for us." 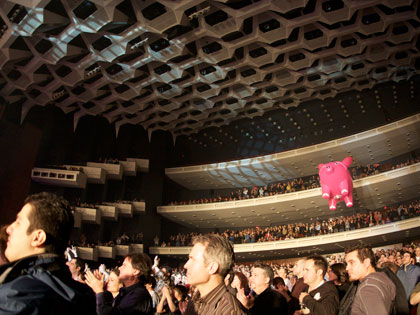 The famous pink pig hovers over concertgoers at a Pink Floyd Experience show.

Here's what you'll want to know about The Pink Floyd Experience, the San Diego based Pink Floyd tribute band: They have a huge floating pig that hovers over the audience, an airborne image borrowed from the cover of Pink Floyd's Animals album.

"It's the only pig that I know that navigates and flies,"says band leader Tom Quinn, 55. "We're on our second pig now. The last one died when the stitching broke down and it lost helium.”

Quinn grew up outside the musical mainstream ("I couldn't even listen to the Beatles; my parents were convinced they were a communist plot.") But when he was in high school in 1973, Quinn got an earful of Pink Floyd's album The Dark Side of the Moon, and he was hooked. He got a guitar, started a band, and Pink Floyd covers topped the playlist. Quinn's music helped put him through engineering school, and he never stopped thinking Pink. In 1997, he and bassist Gus Beaudoin began playing Pink Floyd music anywhere someone would let them on the stage. Now their group performs nationwide, with a new tour beginning in February.

The blues-tinged progressive rock of Pink Floyd isn't an easy sound to duplicate with authenticity, but Quinn says true Pink Floyd fans don't cut pretenders any slack at all: "Just like Beatles fans, Pink Floyd fans know every note, every nuance. They know when it's not right. You have to respect the music."

Quinn has never met an actual member of Pink Floyd, but he did get to see co-founder David Gilmour perform at a taping of The Tonight Show in 2006.

"I was about eight feet away from him," he says. "I was like a little kid."