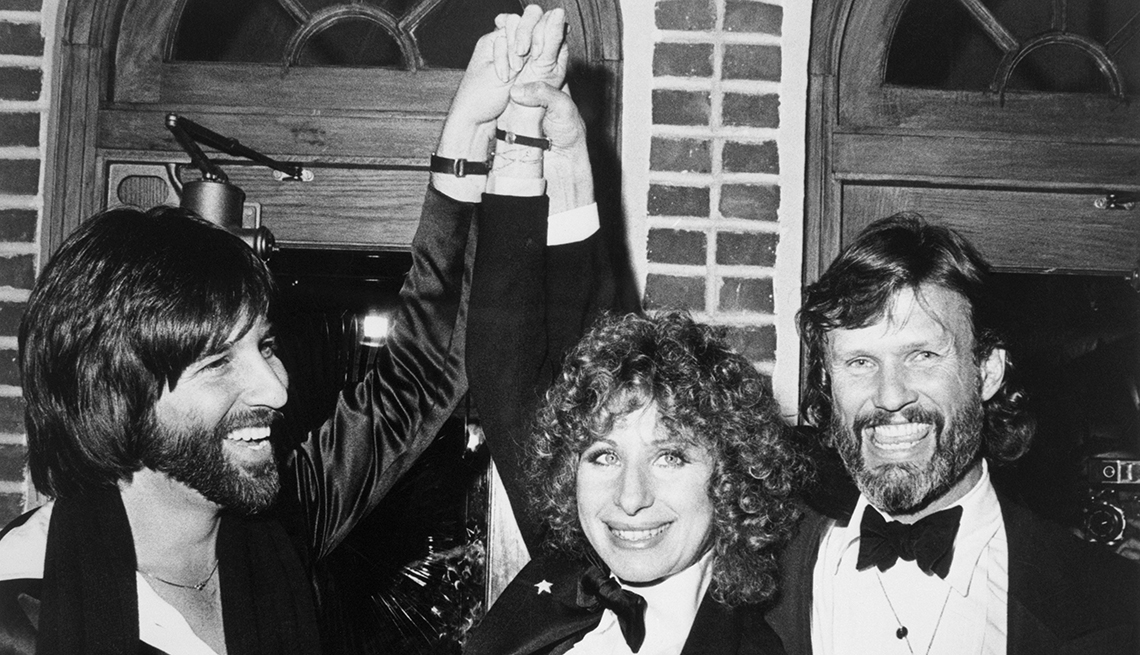 Left to right: "A Star Is Born" producer Jon Peters and its stars, Barbra Streisand and Kris Kristofferson, celebrate the success of their 1976 film.

If the setup of the new romantic musical A Star Is Born sounds awfully familiar, that's because the Bradley Cooper-Lady Gaga movie is Hollywood's fourth version of the story. As Barbra Streisand, who starred in the 1976 version, has said, it’s a story that “seems to work every 20 years.” Here are all four films in the series, each worth watching now, and what's memorable about them.

Characters: North Dakota farm girl turned Hollywood waitress Esther Blodgett (Janet Gaynor, winner of the very first Oscar for best actress) meets hard-drinking movie star Norman Maine (Oscar winner Fredric March). Her star rises as his falls.
Signature song: The title melody from the soundtrack, “A Star Is Born,” by Max Steiner, became a pop tune sung by Buddy Clark (who after this career break became a star for his hit “Linda,” inspired by the name of a charming child who grew up to be Mrs. Paul McCartney).
Success: Voted 1937's No. 1 moneymaking film. Received seven Oscar nominations (winning for best original story). Has a 100 percent Rotten Tomatoes rating.
Inside Hollywood backstory: Though alcoholics John Barrymore (who almost starred in the 1954 remake) and John Gilbert helped inspire the Norman Maine character, the director's son William Wellman Jr. told Moviemaker magazine that the crucial inspiration was Wellman Sr.'s friend, “poor John Bowers, whose body washed up off the coast of Malibu during the production of this film.” After sailing to Catalina Island, the silent film star Bowers tried and failed to get a role in a friend's talkie that was shooting there. Washed up professionally, legend has it that he walked sadly into the sea to his death.

Characters: Movie star Norman Maine (James Mason) meets Esther Blodgett (Judy Garland), who becomes famous. He walks into the ocean and drowns so that he won't burden her with his failure.
Signature song: "The Man That Got Away,” by Harold Arlen and Ira Gershwin. Nominated for an Oscar for best original song. Voted the 11th-best song in cinema history by the American Film Institute. Inspired the good new book by Garland’s daughter Lorna Luft, 65, A Star Is Born: Judy Garland and the Film That Got Away.
Success: Six Oscar nominations, a huge movie comeback for Garland, and a 97 percent Rotten Tomatoes score.
Inside Hollywood backstory: When director George Cukor offered Marlon Brando the Norman Maine part (also considered were Cary Grant, Humphrey Bogart, Jimmy Stewart, Henry Fonda, Frank Sinatra and Errol Flynn), Brando, then 28, said, “I'm in the prime of life. If you're looking for someone to play an alcoholic has-been, he's sitting right over there,” and pointed to his Julius Caesar costar James Mason, then 44.

Characters: Rock star John Norman Howard (Kris Kristofferson) gets eclipsed by singer Esther Hoffman (Barbra Streisand).
Signature song: "Evergreen” (aka “Love Theme from A Star Is Born"). Streisand was learning to play guitar for the role, hummed the melody, and Paul Williams wrote the lyrics.
Success: Won the Oscar for best original song. The titanic and iconic smash also won the Grammy for song of the year. Though critics lambasted the film — “A Bore Is Starred,” said the Village Voice — audiences flocked to it, and it made $353 million (in 2018 dollars). Today, Rotten Tomatoes critics rate it a dreadful 32 percent, but audiences like it more than twice as much (68 percent).
Inside Hollywood backstory: Joan Didion and John Gregory Dunne wrote the movie for James Taylor, then an addict, and Carly Simon, who turned it down — as did Liza Minnelli, Diana Ross and Cher. Maybe they should've reconsidered, since the role spurred Streisand to a $3.2 billion movie career.

Characters: Country-rock star Jackson Maine (Bradley Cooper) watches waitress Ally (Lady Gaga) outdo him, but frets that she may sell out her talent.
Signature song: "The Shallow,” by Mark Ronson and Lady Gaga, sung by Gaga and Cooper.
Success: The only question is: Will it be a bigger hit at the Grammys or the Oscars? Gaga may well become the first singer to break out as a major movie star since Whitney Houston (who almost costarred with Will Smith in a version of A Star Is Born). Rotten Tomatoes scores it 95 percent. Streisand told Billboard magazine: “I loved Judy Garland's version, I like this one a lot, and I liked mine."
Inside Hollywood backstory: With success like this, perhaps the people who spent years trying to make the latest version of A Star Is Born (directors Clint Eastwood and Oliver Stone, and stars Russell Crowe, Beyonce, Jamie Foxx and Jennifer Lopez) may be feeling a wee twinge of envy.